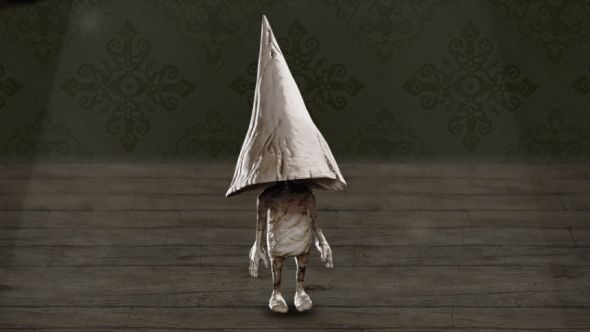 Publisher Bandai Namco have something new to show at Gamescom, but they aren’t ready to reveal what it is just yet. In an unexplained image sent around the internet, they say that “something is stirring in the kitchen. Sweet & disgusting in equal measure, it is a dish unlike anything we’ve ever served before, and we’d like to give you a taste!” It’s accompanied by a link to the game’s official website, which features a mini-game to unlock the art you see above.

Like your scares undead but actually out now? Here’s the greatest zombie games.

The revealed character appears to be made of wood or clay and is definitely lacking expected features like eyes, mouth and nose. PCGN supreme editor overlord Joel pointed out that it looks like a twisted version of FF9’s Vivi, with obvious inspiration taken from Silent Hills’ most famous antagonist, Pyramid Head.

How it will factor into the game, how the game plays and many other details are still mysterious. A countdown on the site points to 6pm BST / 10am PDT tomorrow, the same time the next day and the day after that. That last looks like it will be a video link, presumably to a trailer, though if they’re planning to reveal all at Gamescom it may take the form of a teaser.

Another game called Little Nightmares was in development at an indie studio called Roboed Games last year, but their Twitter account went silent nearly 500 days ago. It was a horror game where you played a “schizophrenic eight year old” called Jacob. They say the main aim is an immersive experience which “other horror games failed to give” and “terrifies you to the soul” as you solve puzzles and run from imagined nightmares. More about it over on the still-available official site.

We’ll find out everything next week. We’ve got many-a-boot on the ground at Gamescom, so do come back for more news.