If there’s one piece of hardware I’m not rushing to replace with a wireless alternative, it’s my gaming keyboard. The slab of mechanical switches strewn across my desk needn’t move all that much, and a wireless gaming headset is far higher on the list of must-haves. But, saying that, with the arrival of the Logitech G915 Lightspeed I’m considering cutting the cord. Not because this keyboard is wire-free 99% of the time, but because it gets low-profile gaming just right.

The onus of the Logitech G915 is wireless functionality, driven by the seamless Lightspeed technology that similarly powers the Logitech G502 Lightspeed and Wireless G Pro gaming mice. This implementation, while not perhaps the most necessary, is superb. It’s highly efficient, perceptibly latency free, and flexible to your needs with dual wireless/Bluetooth connectivity.

You need only look to the battery life of the G915 to gauge the efficiency of Lightspeed wireless. While battery life has been the downfall of many a wireless gadget over the years, the G915 requires only semi-regular charging with a battery life officially rated to 30 hours with per-key RGB illumination cranked all the way up to max. That should see you through a good few gaming sessions before it all fades to black. Or, in my experience, roughly three days of all-day RGB goodness in the office.

For us resolutely desktop gamers the benefits of a wireless keyboard are largely aesthetic for the most part. But, boy, does my desk look great without wires cluttering up the place. The G915 is another sublime pairing of brushed aluminium and subtle styling that is to be expected from a design team that rarely puts a foot out of place.

The G915 enclosure measures just 22mm thick and the first keyboard to utilise the company’s latest mechanical collaborative effort: the GL switch. Available in three flavours – Clicky, Tactile, and Linear – the new switch is designed alongside and built by switch maestro Kailh. 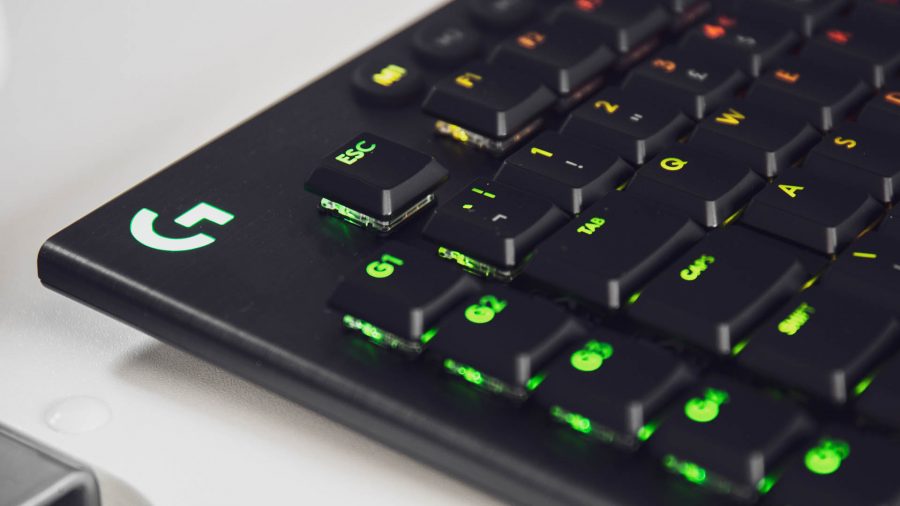 While its full-size switches are some of the most varied and enjoyable switches around, I’ve had some misgivings with low-profile switches Kailh has released over the years – particularly the tactile choc switch used on the Hexgears X-1. Yet the new GL Clicky switches included on the Logitech G915 are superb, and a pleasing departure from Romer-G.

The actuation point is ever-so-slightly above the familiar click at 1.5mm, which lends itself to a consistent and reliable keystroke, and not wholly dissimilar to its full-size brethren. The total travel distance of 2.7mm is enough to ease any concerns over this keyboard feeling like it’s been torn straight out of a MacBook, too.

The five macro G keys on the left-hand side of the board should also placate gamers desperate for macro real estate. Plus, these are spaced far enough away from the main body of keys to avoid any key confusion.

And the G915’s GL switches are noticeably quieter than some full-size clicky switches around – compared to Kailh’s Bronze switches these are practically silent. While, of course, still noisier than most linear variants, the GL Clicky’s signature din won’t wake up the neighbours during a furious game or **** talk match, either.

And so the G915 feels truly mechanical in every sense, and it avoids the pitfalls of flat, unshapely key caps often used on low-profile boards that can hamper consistent typing. It’s easy on the hands and wrists too, although a wrist rest wouldn’t have gone amiss at this price.

Which brings us onto how much this keyboard will set you back – and it’s a doozy. The Logitech G915 costs $250 (£210), a price tag undoubtedly ballooned by its Lightspeed wireless chops and brand new bespoke switch design. But there is a solution. If wireless isn’t your speed, the G815 is the exact same board wired up for ease of use, packaged with a slight $50 discount for your troubles. No doubt both boards are still ultra-premium fare, but with only an edge case to be made for wireless keyboard chops, the wired variant could be a marginally more reasonable alternative. 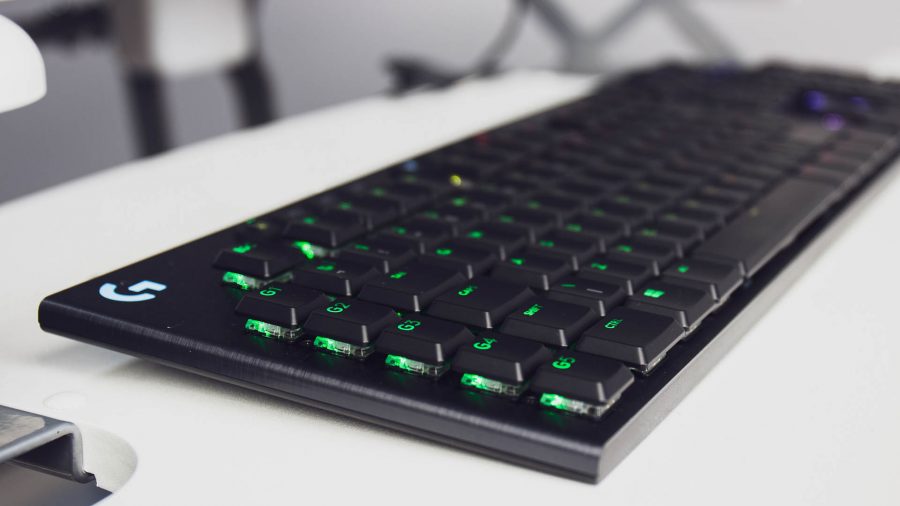 The G915 isn’t without its functional flourishes, however. Sitting above the function keys are full media controls with free-rolling volume adjustment to mimic the wonderful infinite scroll wheel of the G503, and there are four profile hotkeys, game mode, brightness, Bluetooth, and Lightspeed shortcuts littered along the top row.

For more extensive configuration the G915 hooks into the Logitech G software. This app was recently given a fresh lick of paint and a simplified UI, and, finally, reflects the quality of the product it controls. From here you can configure Lightsync (RGB lighting), set up profiles per game, and implement macros and animations as you see fit. It will also give you a heads-up if battery level is running low.

Building a low-profile gaming keyboard fit to take on the best gaming keyboard challenge is not just a question of shaving a little off the top with a cutthroat razer. It takes so much more than that, and few are up to the challenge produce anything as compact, comfortable, and satisfying to use as the Logitech G915 Lightspeed.

Somehow as good to look at as it is to game on, and both completely suited to gaming as it is an office at least twice as professional as the PCGN one, the G915 is quite a keyboard chameleon. And with gaming now bridging all walks of life and no longer relegated to outmoded imagery of dingy basements and exaggerated gamer style, this is the keyboard to match – perfectly suited to a mature market that demands substance and style. But, damn, if this isn’t also the definition of champagne tastes.

Blending low-profile comfort and style with wireless performance, the Logitech G915 makes for a sublime, albeit expensive, addition to any gamer's arsenal.