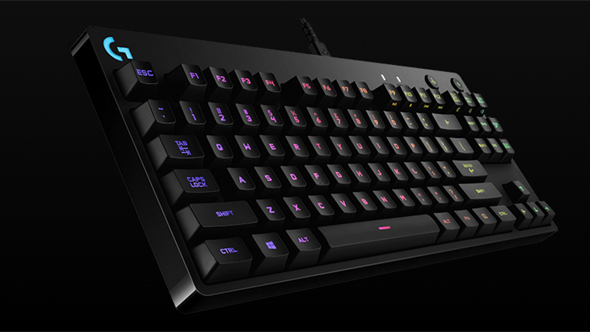 When you’re playing to win, you need kit with one simple purpose: it has to be built to help you perform at your best. That’s why the new Logitech G Pro Gaming Keyboard is an essential addition to your gaming armory. Every single part of it has been designed with the demands of pro gaming in mind, ditching the stuff you don’t need, refining the elements that can help you win, and putting it all together in a compact, focused package that’ll give you the edge at any competitive event.

It’s the best gear to help you play at your best and ultimately, to win. Need convincing? Here are the five big reasons why you need to upgrade to a Logitech G Pro Gaming Keyboard.

In competitive gaming, especially at the professional level, milliseconds can make all the difference between victory and defeat. So if you play to win, you’ll need a keyboard that responds to your input as quickly as possible. Logitech optimized the actuation distance to minimize errors while still being fast. Standard mechanical keys have an actuation distance – the distance a key has to travel before it registers a press – of around 2mm. The Pro’s Romer-G switches actuate at just 1.5mm which means that they are 25 percent faster than its nearest rivals. So, if your fingers are moving at 300mm per second, you’re 1.6 milliseconds faster than someone playing with a standard mechanical. In a lightning-fast MOBA, that makes all the difference.

Gaming keyboards needs to be able to withstand a lot more punishment than normal. The average keyboard copes with light use across all its keys, while a keyboard used for gaming is more likely to see the same few keys taking an utter hammering hour after hour, day after day, and you can’t afford for any of them to fail on you in the middle of a match. That’s why the Pro Romer-G switches are tested to 70 million keypresses which means no matter how rough you are on them, they’ll keep on performing for years.

When was the last time you used your current keyboard’s numeric keypad? Take a look; it probably has a light coating of dust on it from under-use. So, if you don’t need it, then you can free up valuable desk space to give you you more room for your mouse – especially useful if you’re low-DPI gamer – and helps you keep your hands in a more natural, centered position. In addition, the tenkeyless (TKL) design makes the Pro keyboard more compact and great for transportation to tournaments and play sessions.

We know that you don’t really need to be reminded which keys you need for a particular game, but when the lights are low and you need to move your hand off-station to hit a little-used button, it’s easy to stab at the wrong one – often with disastrous consequences. The Pro has customizable RGB lighting to prevent this. With Logitech Gaming Software it’ll automatically light up all the keys you need for practically any game you care to name, you can also unleash colorful animated flourishes to celebrate every win. You can even use the Pro’s lighting in competitions where custom software is banned. It can store one lighting preset to its onboard memory so that it’s available even if Logitech Gaming Software isn’t.

Stay in the Game

If there’s one thing worse than hitting a random wrong key in the middle of the game and missing an easy kill, it’s accidentally pressing the Windows key and suddenly find yourself dropped back to the desktop. It’ll probably lose you the game, and it’s embarrassing as hell to boot, but it doesn’t need to happen. One press of the G Pro’s Game Mode key takes you – unsurprisingly – into game mode, which automatically ignores the hated Windows key, and you can use Logitech Gaming Software to customize it so that it deactivates any other keys that you don’t like the look of. Now that’s control.