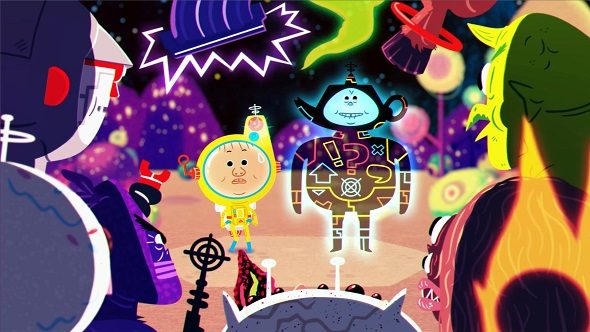 There aren’t many games that involve card battling, space travel and Glaswegian genies all in one package. If you fall into the demographic that wants those exact things in your latest roguelike, then Loot Rascals is the game for you. Developed by Hollow Ponds, this surreal RPG has players battling monsters and finding new friends, after their ship crash lands on an alien world.

Charting your next interstellar trip? Have a gander at these PC space games.

Loot Rascals could be a lost cartoon from the ‘80s, with its trippy monster design and bright colour palette looking like the fever dream of a Cosgrove Hall animator. As you quest to escape this alien world, players will collect loot cards to power up their space suit and allow them to fight all the vicious monsters roaming around. By setting up these loot cards in specific formations, adventurers can increase their defence, boost their attack power and gain special abilities. You can even augment cards with enchantments like burning or freezing powers. With the loot being ranging from sapphire shuttlecocks to flaming armbands, you’re bound to look like an explosion in space-Poundland by the end of a run.

If you die on your exploration of the alien planet, players will drop all their loot for nearby monsters to pick up. These greedy chaps will then appear in other players’ games, laden with treasure for you to acquire. If you are a pleasant person, you can send the loot back to the player who lost it upon vanquishing a baddy. However, if you’re looking low on loot, you can pinch the spoils for yourself. Based on your decision, players can enter your game as holograms to either help you out as thanks or kill you in revenge, so try to be kind if you can.

Humour is a great part of Loot Rascals, as seen with your deadpan Glaswegian genie companion and the fact you can wear a special pair of underpants in order to gain lightning powers. If you’re a fan of the surreal and roguelikes, Loot Rascals may be right up your strata.

Loot Rascals will be out on PS4 & PC March 7th!
Press folks: get in touch for a Review Buildhttps://t.co/vLQ0NHgQ78
(RTs appreciated x) pic.twitter.com/wUUbHRPwjU

Loot Rascals has been out on itch.io to select testers for a short while now but it will be available for everyone on PC March 7. You better wash those magic pants and blow up your radioactive armbands in readiness.