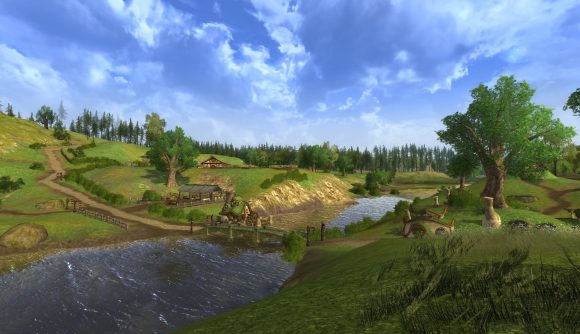 Players in Lord of the Rings Online gathered across multiple servers to pay their respects to Sir Ian Holm, who played Bilbo Baggins in the Lord of the Rings movie trilogy, after he passed away this week. Several tributes were put together by hundreds of players in the free MMO game, involving small gatherings, shared hikes, and a Dwarven rendition of Enya.

In a Reddit thread (ta, Eurogamer), users discussed the various ways different parties went about honoring Holm’s memory. In the Evernight server, some 300 people showed up to the Hall of Fire in Rivendell Valley and gathered around the Bilbo Baggins NPC. “A mini played the soundtrack ‘Misty Mountains’ the whole time,” uiser Ch_Mell commented in the thread. “I really love the community of this game: 300 people gathered and walked to Rivendell on a moment’s notice. RIP Ian, may your soul be free.”

Another redditor, RoadrageWorker, described Belegaer’s send-off for Sir Ian: “We gathered in front of Bag End, and to Lobelia’s dislike, had a big firework. There was music and mourning, and we all wished Ian godspeed on this last of journeys.” The same happened in the Laurelin server, a video of which was edited together using screengrabs and Enya’s Only Time as covered by a Dwarven minstrel. More are coming – the French server Sirannon is putting together a trek of its own, according to another commenter.

Aside from being the cinematic Bilbo Baggins, Sir Ian Holm is perhaps best known as Ash, the cold, homicidal science droid from Ridley Scott’s Alien. Some of his other roles included Napoleon in Terry Gilliam’s time-travel romp Time Bandits, Sam Mussabini in historical sports drama Chariots of Fire, and Father Vito Cornelius in 1997 sci-fi blockbuster The Fifth Element.

These tributes are a small but touching homage to such a long, varied career. He will be missed.