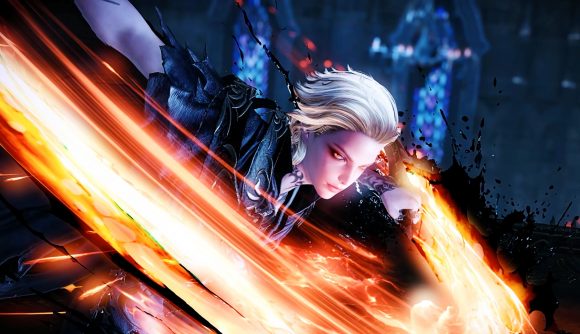 While some of Lost Ark’s earlier story beats include travelling through plague-stricken lands, helping innocents, and besting giant demonic beasts, it’s the bold attitude with which women characters are animated to walk in-game that has been sticking out for many players. Well, those that can get into the MMO, anyway.

During cutscenes, female characters walk with an exaggerated swagger that sees their hips move from side to side quite dramatically – there’s some real attitude going on. Even when you’re freely roaming the map, your female character floats across the screen with a dainty little prance instead, which has the effect of shifting their character from someone who evokes a femme fatale type to more of a damsel in distress.

After seeing oodles of clips surface online, I made a character to see it for myself and, yep, there’s some serious attitude going on there. Even when my assassin merely needs to shuffle back one or two steps, the dramatic, femme fatale-style walk is still there. It’s frequently hilarious how it collides with the drama of a few scenes, too. A merchant cries out for help at one point as all of their possessions are on fire. What’s supposed to be a frantic rescue of their livelihood turns into something akin to a weird fashion ad as I daintily skip to the rescue with a bucket of water in hand.

At another point, two rival, mediaeval-like factions face off against each other in a game of chicken as I sassily get out of their way. As ever, the internet is having fun with the situation with memes and the like.

Cool game but why does she walk like that tho #LostArk pic.twitter.com/JFoCudOzgT

Anyone else notice the uhh.. *dainty* lady-like walks? pic.twitter.com/z8V6FdCike

My Sorceress on her way to a hugely tragic storyline, killing dozens of enemy soldiers and rescuing civilians from monsters and fires from lostarkgame

The diva-like attitude of some classes aside, Lost Ark is proving to be hugely popular for Smilegate RPG and Amazon Games. The new PC game peaked at 1,325,305 concurrent Steam players over its first weekend (thanks, SteamDB), seeing it beat records held by CS:GO and Dota 2. Naturally, though, that has led to server congestion. It’s been most keenly felt in Europe, though a raft of new servers is on the way.

If you’re looking to get into this one yourself, our Lost Ark beginner’s guide is an excellent place to start. Just bear in mind that if you go for a female character, you might find yourself chuckling through some otherwise dramatic cutscenes.