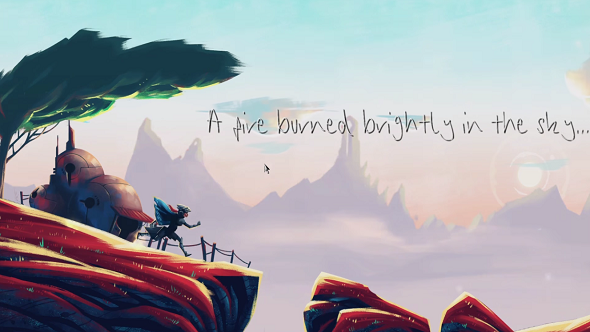 Famous for her work on film and TV as well as videogames, Rhianna Pratchett recently left her role as the lead writer on the Tomb Raider series. Now Lara Croft is fully rebooted, Pratchett is off on her next adventure, and this one looks suited to to an embedded scribe.

That’s because it’s all about words. Words narrate the adventure, words are the platforms you need to navigate, words solve puzzles, and words take life, forming the world around you.

It’s already won a bunch of awards at indie game shows for best story and creative innovation, so it could be one to keep an eye on, since it’s coming this year. Check out the trailer above.

The designer is Mark Backler, founder of developers Sketchbook Games. He’s worked on games such as Fable 2 and Harry Potter and the Order of the Phoenix.

Audrey Profit is the programmer – she worked on a game called Tiny Trees with Whispering Gibbon. It was about growing and maintaining bonsai trees and I loved the look of it back when I saw it during development. It looked like one of those games you put on to relax.

The animator is Rahel Brunold, who was one half of the animation team on Ori and the Blind Forest, which you probably know looks incredible in motion.

There are two composers, one of whom is David Housden, responsible for the score on Thomas Was Alone and Volume.

The narrative designer, Maurice Suckling, has worked on over 40 published video games, including Borderlands: The Pre-Sequel!, Mafia III, and Civilization 6.

“Her aim is to help developers embrace storytelling in games and improve the ways in which interactive narrative is defined, integrated and received.”