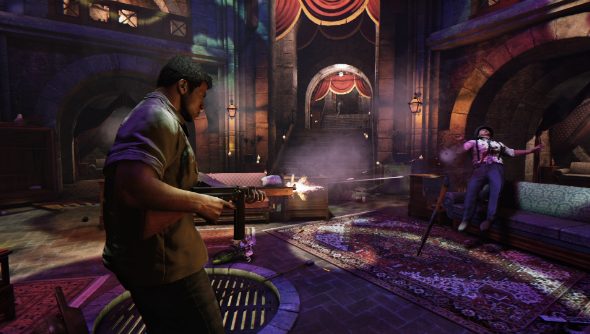 Mafia III is definitely an open-world game (although for heaven’s sake don’t compare it to GTA V). NPCs mill around the streets minding their own business, you can hop in a vehicle and drive freely around its New Orleans setting, and in the bottom corner sits a minimap filled with coloured lines and blobs. However, swap ‘Empire Bay’ for ‘New Orleans’, and the same could be said for Mafia II. And that was not an open-world game.

I mean, obviously it was in the literal sense that you were able to explore at your leisure, and you could cruise around in a Shubert 38 blasting out some Little Richard (always a pleasurable experience). But outside of the story missions there was almost nothing of substance to do. It wasn’t so much a sandbox as a strictly scheduled sand castle building seminar.

That’s not to say that the end product was poor. Solid mechanics were bolted on to an engaging storyline, but the game’s strongest suit was undoubtedly its capturing of an era. Architecture, incidental details, the soundtrack, that brilliant montage around the midway point – it all combined to ground you in its world, and lend an air of authenticity to proceedings.

Mafia III wants to do the same, but Hangar 13’s debut game looks set to offer far more in the way of optional extras. 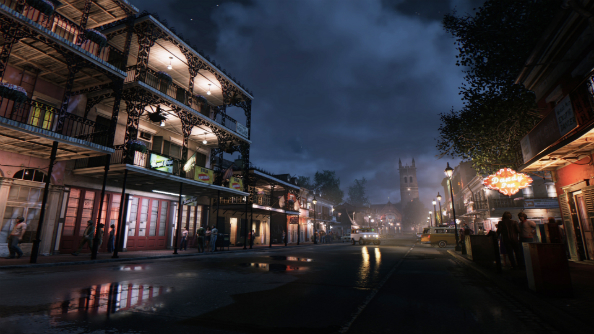 Firstly, some context. Events take place (initially at least – Mafia II was set across a number of years) in 1968. This is a USA gripped by the effects of the Vietnam War, the Civil Rights Act had only been signed four years previously, the gay rights movement was gaining momentum, and Planet of the Apes had just hit cinemas. In short, it’s a time of much upheaval, unrest, and talking monkeys. The game’s protagonist is Lincoln Clay, who’s recently returned from ‘Nam and become a member of the “Black Mob”, and the core action centres around his attempts to overthrow the more traditional Italian crime syndicate.

Hangar 13 refer to Clay as an “anti-hero” – this is presumably the term you use when your player character has a penchant for repeatedly knifing people directly in the face. You see, Mafia III is a violent game. Like, really violent. In fact, a man in the same demo as me actually shouted “Well that’s just not necessary!” at one point, something which I’ve literally never seen in all my years doing this job. Usually people just laugh at stuff like that. 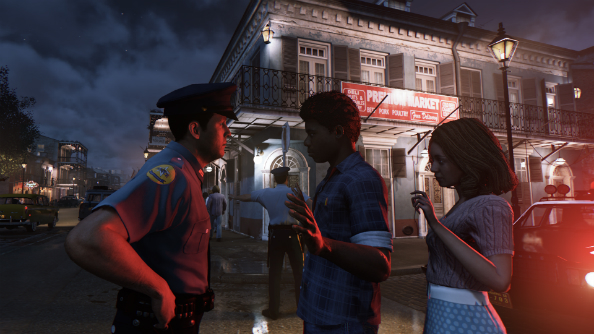 The reason for all this face-knifing is to discover the whereabouts of a drug den belonging to a Doc Gaston… presumably so his face can be well and truly knifed as well. Clay’s first step is to gather intel, so he hits the streets. Streets which, it must be said, are extremely pretty. There are people carousing outside of bars, buskers playing on the rain-slick streets, and a young black man being hassled by some cops. (This is a point at which the player can choose to intervene, but the option is declined in our demo.)

Presumably because drugs and death go hand-in-hand, Clay heads for a nearby cemetery on the hunt for a small-time dealer. There are couples making the sexy on gravestones, but our man is able to tear himself away from this rather morbid canoodling spot and locate his target. After the briefest bit of eavesdropping Lincoln pounces on the dealer’s muscle, crushing a cranium against a tomb and then whipping out his gun to deal with the rest. This causes the dealer to flee (only cowards take drugs, kids), so a brief car chase ensues. 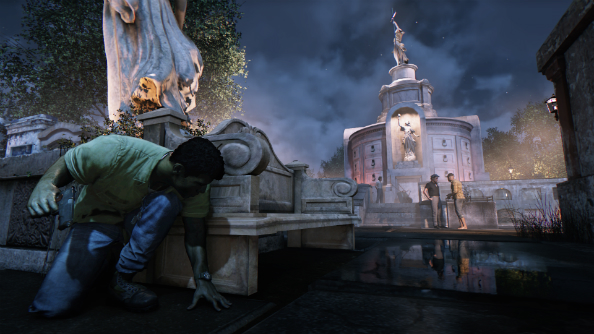 Once caught up, the pusher spills the beans no problem. The game then presents the player with a choice: spare the no-good filth peddler, or make him pay for his dastardly ways. Just what will Clay decide? You guessed it: brain matter everywhere. It’s at this point that the police decide enough is enough, so it’s back behind the wheel for some more hot rubber action. After some time weaving through the streets with a blatant disregard for the Highway Code, another of Mafia III’s gameplay systems is revealed.

Clay has three lieutenants on hand to help him out, each with their own set of skills. Get dialing at a phone box (remember those?) and Cassandra, Vito and Burke can call in some muscle, summon snipers, provide supply drops, as well as various other useful functions. This time the player opts to simply pay off the chasing cops, presumably because he’s had enough of the violent life for now. OR HAS HE? (He hasn’t.)

The info from the late drug dealer points LC to a nightclub called the Cistern (actually a Mafia front), located in the city’s French ward. Act suspicious in a place like this and NPCs will call the fuzz, so it’s best to play it cool. And by cool, we obviously mean going into the tunnels below the club and shivving a man several times in the torso. That said, Mafia III does provide multiple routes in situations such as this – here, for instance, there is also an alternate entrance that is accessible by boat. 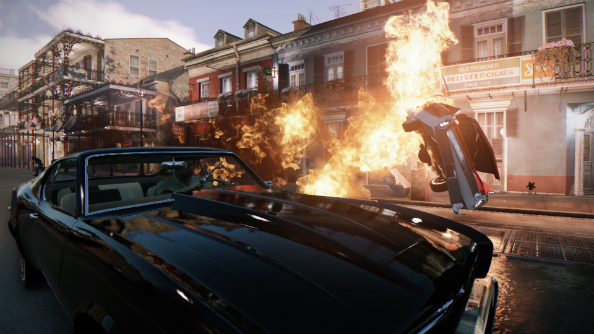 More stealthy takedowns follow, eventually leading Clay to his target. Doc Gaston is swiftly dealt with via some bullets to the head, and then things really go loud. Goons flood in as Clay attempts to make his escape, dealt with via a tasty mix-n-match cocktail of shotgun, pistol, magnum and grenade. Mmmm, deadly.

Once rival hideouts are captured, you assign them to one of your lieutenants to run – who you pick dictates which bonus you receive, such as access to better snipers (always with the snipers). However capturing rival hideouts also can lead to retalitions, as we see when a fleet of mobs cars pursues Clay as he makes his getaway. This culminates in probaby the best moment of the demo: as the Rolling Stones’ Paint It Black blasts out of the stereo, one enemy vehicles inadvertently ploughs into the back of another, using it as an accidental ramp and flying across the carriageway. And people say videogames aren’t art…

Mafia III looks both lovely and really nasty. It seems set to right the issue of narrowness in its predecessor, and also retain the feeling of time and place that the series nails so well. My main concern at this point is the likeability of Lincoln Clay, and whether we’ll get invested enough in his tale to want to pursue the various activities on offer. If he could stop with all the face stabbing, that would be a good start.