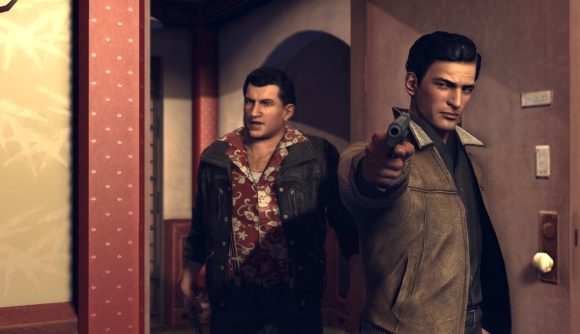 The official Mafia series Twitter account has come out of hibernation – or perhaps it’s more in keeping with the spirit of things to say that it’s out of federal custody. Hangar 13’s Mafia series is back, at least on social media, and we take that to mean it’s gearing up for an announcement of some kind.

“Family,” reads the one-word tweet, posted at 10:00 EST Sunday. It’s not a particularly illuminating message on its own, but the mere fact that it exists is portentous. What could it mean? Let’s consult the videogame tea leaves and have a think, shall we?

A few commenters have playfully suggested that Mafia is teasing a crossover with the Fast and Furious franchise, and while that’s admittedly a terrific concept, it’s not one that holds a lot of water at the moment – at least not until we hear something from Vin Diesel and company.

Mafia III was free to play on Steam the first week of May, which serves as additional evidence that 2K and Hangar 13 are gearing up for some kind of Mafia-related announcement. All the Mafia games naturally have strong themes of familial bonds and obligations, so the wording of the tweet itself doesn’t provide much to go on in terms of which storyline they plan on revisiting, or how.

What we’re likely to get soon, however, is an official confirmation of the Mafia II and Mafia III Definitive Editions that were leaked by Taiwan’s ratings board last month.

But the thing about remasters is that they often serve to prime the pump for new entries in established series themselves. Is another story about the Empire Bay families in store? Or could we be returning to Mafia III’s New Bordeaux? Of course it’s entirely possible that there’s a whole new story in the works – and that would be an offer we couldn’t refuse. Rumour has it that a fourth game in the main series was meant to be set in Las Vegas of the 1970s.

In the meantime, you can get a glimpse at what the Mafia II: Definitive Edition might look like with this Mafia II visual overhaul mod.