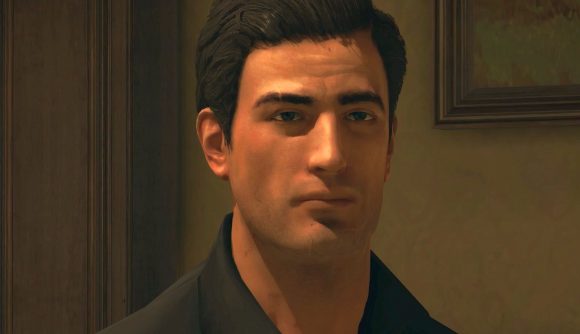 If you’re a fan of 2K’s Mafia action-adventure games series, you might have noticed something curious happening on its official Twitter channel over the last couple of days. After roughly two years of inactivity, three words have now popped up, one each day: “Family”, “Power”, and “Respect”. Now, the studio has posted a clip teasing what these hints have been leading up to: something titled “Mafia Trilogy”.

That’s according to the final few seconds of the new Mafia teaser, included below, in which the title and those three words appear – along with news that a full announcement will arrive next week, on May 19. The brief, 30-second clip doesn’t give much away about what this mystery project will be – but there are a couple of familiar faces in there that could give us an idea.

Mafia 2 protagonist Vito Scaletta and his best gangster pal Joe Barbaro make an appearance a few seconds in, with a voiceover (presumably Vito’s) saying: “For the last ten years, all I’ve done was kill. I killed for my family. I killed anybody that got in my way.”

Mafia 3 protagonist Lincoln Clay then follows, saying: “Family ain’t who you’re born with. It’s who you’d die for”. As for the first, partially silhouetted figure in the clip, it’s not at all clear who this might be – but given the project is a “Trilogy” of some sort, it’s possible it could be Tommy Angelo from the first Mafia game (from way back in 2002).

Live the life of a gangster across three distinct eras of organized crime in America. Discover the #MafiaTrilogy Tuesday, May 19 at 9am PT / 12pm ET / 5pm BST at https://t.co/I2ztjXo7FZ. pic.twitter.com/kzLD4qFRAj

If so, this could potentially point to some kind of remaster of the three games in the Mafia series so far, though this is just speculation at this point – 2K hasn’t confirmed what the teaser might be hinting at yet, and there’s far from anything concrete in the clip.

All we can say for certain is the studio has some news tying into the long-running crime games series to share with us on May 19 – so, Mafia fans, be sure to keep a lookout when that date rolls round.