Wizards of the Coast and developers Stainless Games have announced a relaunch of their digital version of Magic the Gathering: Magic 2015. The game was greeted with mixed reception from fans – while they did add real deck-building to the game, some cards were locked behind a paywall of “premium boosters” that could only be attained by spending more money.

The new relaunch will remove these premium boosters, instead adding them as prizes for winning multiplayer matches. They’ll also be adding a new expansion dubbed “Garruk’s Revenge”, which adds a new campaign and cards from the Alara card set.

The relaunch will occur on November 5th, where a new pricing model will be introduced: 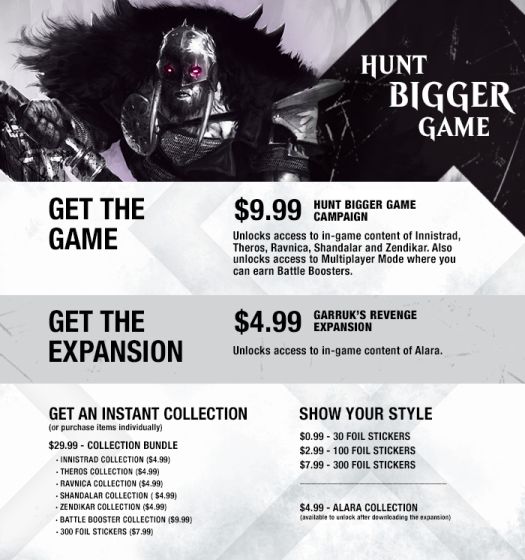 The relaunch also signifies the arrival of a new expansion pack, Garruk’s Revenge. Players will journey through a new four-level campaign, as well as gain access to cards from the Alara card set. It’ll cost $4.99 via the in-game store.

Does this placate any issues you had with the game, whether you’ve bought it already, or been put off from the soon to be extinct premium boosters?