The Collectible Card Game world’s got awful crowded since the last Duels of the Planeswalkers. Magic: The Gathering’s digital tie-in now has to compete with Blizzard’s planet destroyingly good Hearthstone and Cryptozoic’s life absorbingly addictive Hex: Shards of Fate. But Magic is the seed of the genre. It is the original. And Wizards of the Coast have no intention of stepping aside for these young upstarts.

Luckily: Magic: Duels of the Planeswalkers 2015 is easily the best in the series so far.

Duels of the Planeswalkers was seen as a training tool for the physical game when it was released back in 2009, a soft introduction to Magic’s core rules. Magic’s European community manager, Dan Barrett, tells me it’s still “the best way to start playing Magic: The Gathering” but Duels of the Planeswalkers 2015 finally sees the series move away from training tool and become its own entity, with a robust deck builder, campaign, four-player multiplayer, and “a collection of several hundred cards from sets both new and from recent memory.”

Like Hex and Hearthstone, Magic’s a game about smashing your opponents with monsters and spells you’ve summoned by playing cards from your deck. The first to get their opponents’ health from 20 to zero wins.

It plays as Magic: The Gathering plays. Your turns starts by playing land cards which increase your mana pool, a reserve that refills at the start of each turn, and you spend that mana on summoning creatures and casting spells. You pick which of your creatures will attack, aiming them all at your opponent’s health bar and cross your fingers. Once you’ve released your minions the defender gets to block incoming attacks with their own creatures, picking who defends what. You can give your beasts a helping hand, though, casting spells to buff their attack and defence, or set traps that activate when your creatures die. 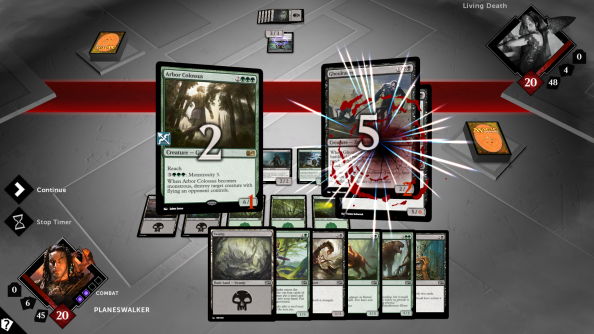 Because there are so many cards to choose from, several hundred in Planeswalkers 2015 alone, there’s no way of knowing what’s in your opponent’s hand (without playing a card that forces them to reveal it). So every turn can take an unexpected twist.

That complexity’s what’s made this 20 year old game remain such fantastic fun and spawn so many imitators.

That’s Magic in general, what makes specifically Planeswalkers excellent is that it’s like an arcade version of the paper game, built to be the quickest way to get a game of Magic into your off time.

It’s campaign, multiplayer, and deck builder are all designed to have you playing in the shortest time and with the least fuss possible. After you finish the tutorial you’re asked to pick two colours and the game builds you a deck based around those choices. In Magic, colours represent different sorts of cards. For instance, green cards are nature loving creature types, lots of animals and trees, black cards are tied to death, think zombies and spells that let you draw from your graveyard.

It takes out the daunting possibility of sifting through hundreds of cards to build a deck that will work in a real game.

From there you’re set loose to either fight your way through the five planes in the singleplayer campaign or take your cards online against other players around the world. Winning games in singleplayer unlocks booster packs, adding cards to your collection, “You have one collection of cards that is the same and grows as you play,” Barrett says. “You can construct decks as you like from that one pool of cards. It’s exactly the same as the paper game.”

And, like in the paper game, you’re free to build your deck exactly as you’d wish. While the idea of building a 60-card deck from scratch can be a little intimidating – there are so many cards that it’s difficult to know what will go together – this process is helped immensely by the auto complete button. All you need to do is pick some cards from your collection that you like the look of, hit the auto complete button, and the computer will fill out the rest of your deck with cards that complement the ones you chose.

Once it completes the build you’re shown a screen which breaks down the relative strengths and weaknesses of your deck. Feel that it’s two reliant on speed? Take out some of the weaker, cheaper cards and replace them with expensive, burly types. The bulk of the work is done by the deck builder and you’re left to fine tune it to your own tastes. 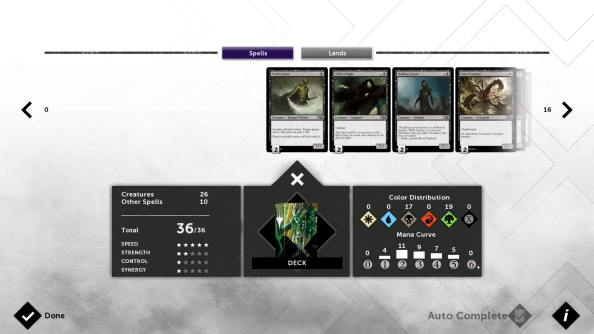 It’s a feature Hex could sorely do with implementing. The first time you look at a screen full of unfamiliar cards it’s confusing and can put you off building your own deck altogether. Planeswalkers 2015 makes the whole process clear and quick.

Much like the singleplayer and deckbuilding, multiplayer’s aimed to be as easy an experience as in Hearthstone, with games with strangers or friends being a couple of clicks away. Unlike Hearthstone, though, you can take part in games with up to four players, either all against all or in teams.

All these separate parts work together to put Planeswalker in an interesting place. On the one side is Hearthstone, a comparatively simple card game but with Blizzard’s attention to accessibility, and on the other is the endearing, genius mess that is Hex – a complex card game which is tied to an MMO campaign, guild system, and auction house. Planeswalkers 2015 is a middle ground. It has the polish of Hearthstone and the tactical satisfaction of Hex.

Planeswalker is being nipped at on both flanks. But there’s a good chance it’s going to take a big bite out of its competitors’ audiences.