Update: Nick’s live now on our Twitch Channel with some Magic Duels: Origins action. Click the link and say hello!

Magic the Gathering’s Duels of the Planeswalker game is changing, forever. The yearly reiteration that has been the core of its existence has been pushed aside for a new model: persistent, expandable, and more importantly, free-to-play.

Now just named Magic Duels, Wizard of the Coast and Stainless Steel Games are beginning this new endeavor with a brand new card set called Magic Origins, which explores five of the most iconic Planeswalkers, their pasts, and their rise to power. In the future, the game will simply be updated to include new card sets as they’re released, rather than creating an entirely new game.

I sat down with Wizards of the Coast community manager Dan Barrett to discuss why Magic Duels: Origins is going to be better than ever – with the brand new Deck Wizard and Skill Quest system, as well as the return of community-favourite multiplayer mode: Two-headed Giant.

The most sweeping initiative is the introduction of a truly free-to-play experience – fronted by a currency system that allows a player to obtain everything without spending a dime.

“I think it was something that our existing fans had been after.” said Barrett. “It’s something that they’ve said ‘wouldn’t it be awesome if there was a free-to-play version of Magic?’. We want to make sure that if anyone isn’t familiar with Magic, and check it out, that there’s no barrier to them doing so. They can try Magic for free, and play it for free, and then at some point if they want to spend some money either in the digital store, or on paper Magic and see what it’s like face-to-face.” 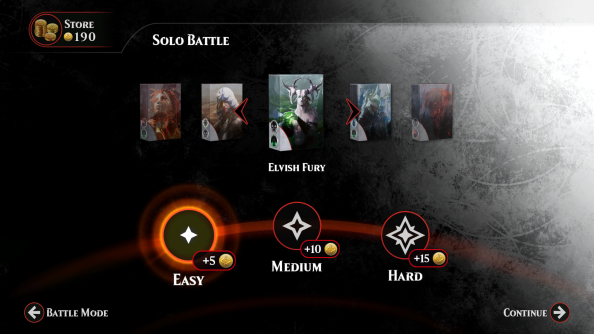 I am one of those players. I’ve played all of the Duels of the Planeswalker games, but it wasn’t until a splash notification in Magic: Duels of the Planeswalkers 2013 told me that a brand new set was about to be released that I got involved with the paper product. A store locater was included in the game, and so it made finding a nearby group a doddle.

One week later, I was waist deep in a pre-release tournament, using all the knowledge I’ve gathered from my Duels experience to try and win. Even though I was comfortable with all the rules and mechanics, It was a nerve-wracking experience to be actually face to face with an opponent.

According to Barrett, I wasn’t alone in how I transitioned from digital to paper.

“Since the Duels of the Planeswalker games started back in 2009,” Barrett stated. “Around 25% of players who play the physical card game have come to it through Duels.”

Considering Magic the Gathering boasts upwards of 20 million players, that is no small feat. And if you fancy doing the same, it’s easier than ever.

“If you go into a store today and say ‘hey, I’m new to Magic – Magic Duels has said to come to a nearby store’, you’ll get what we call a ‘New Player Welcome Kit’.” explain Barrett. “It’s a little deck box, that includes two of the 30 card sample decks, and also information on getting started with paper Magic and Magic Duels. We give those to stores for free, so any new players can grab them without any hassle.” 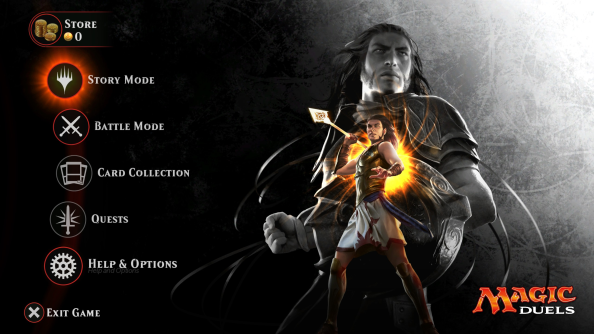 Magic Duels: Origins follows the lives of five Planeswalkers: Gideon, Chandra, Jace, Liliana and Nissa. These five predominant characters will be the center-pieces of the Magic the Gathering narrative moving forwards, especially when the next set is released: The Battle for Zendikar – which will also be added to Magic Duels down the line.

Within the game, we’re given the opportunity to learn the backstories of each of the Planeswalkers through a series of pivotal confrontations in their lives, which led them to become the powerful beings they are today. Players can journey with each of them, fighting those battles and learning more about their motives and values.

Around 80% of the Origins card set is included in the game, where it is bolstered with a select few notable cards from across the decades. As sets are announced and released for the physical card-game, they will also appear in Magic Duels. When I asked Dan about the possibility of adding past sets, he said it wasn’t planned, but due to the expandable nature of the game, it’s certainly not ruled out.

One of the biggest criticism of the last Duels of the Planeswalker game, Magic 2015, was the removal of a popular multiplayer mode, Two-headed Giant. It’s a simple affair, where four players go head-to-head in teams of two, each with a unique deck, but sharing the same life-total. The good news is that it’s back. Dan Barrett made it clear that Wizard’s “listened to the resounding community feedback”. The future for other multiplayer modes returning is not set in stone. 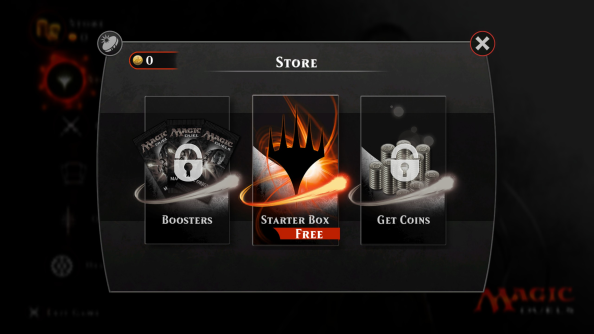 Gold is the new currency for Magic Duels. You’ll earn it from completing campaign missions, beating the AI and real-life opponents, completing Daily Quests and even from tutorial Skill Quests. The most important thing for Wizard’s this time around is ensuring that everything is available for gold, allowing players to not spend a single penny if they wish.

“You use coins to buy things from the store.” Barrett said as he showed me the store. “Right now that’s only booster packs, but in the future it could be new campaign levels, new features, all sorts of things we’ll be adding in the future. Foils can also be purchased, but they’re purely a cosmetic upgrade – players can foil any card for a small number of coins too, and it will foil all copies of that card.

Rewards vary depending on the challenge. The gold rewards from the campaign are generous, but only a one time offer. Beating the AI will reward you with 5, 10 and 15 gold, increasing as you up the difficulty from easy, normal and hard respectively. What’s interesting is that these AI opponents will wield intelligently randomised decks, so you’ll never duel the same opponent twice. If you’re confident enough, you can face a real-life player for the chance at winning 20 gold. 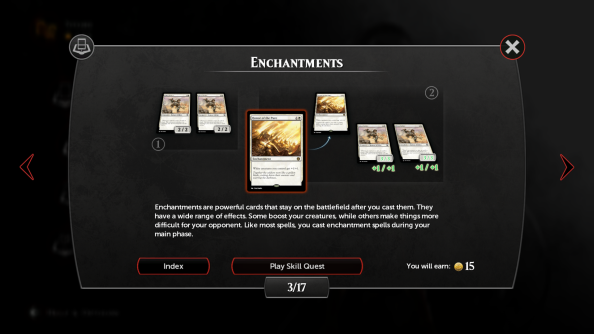 But there’s other augmentations as well. Completing the Skill Quest system, a revamped method of teaching new players the mechanics of Magic and its cards, will also award one time gold prizes.

“If you’re a new player, when you encounter new card types and mechanics for the first time, you’re given the option to take a Skill Quest.” said Barrett. “These short tutorials last between 30 seconds to two minutes each, and can then be applied directly to the match you’re in. So you’ll take in a little bit of knowledge, and also score some extra coins too.

These are accompanied by daily and weekly challenges that provide you with a steady stream of income for completing randomised tasks.

“Daily Quests give you a challenge with a gold reward,” Barrett explained. “For example one could be ‘win two games with a specific colour combination deck’ or ‘chose your opponent as the target of 15 spells and abilities’. The Community Quest is a weekly undertaking, which all Duels players contribute to and reap rewards from. As long as you provide some input into the challenge, you’ll earn the reward.” 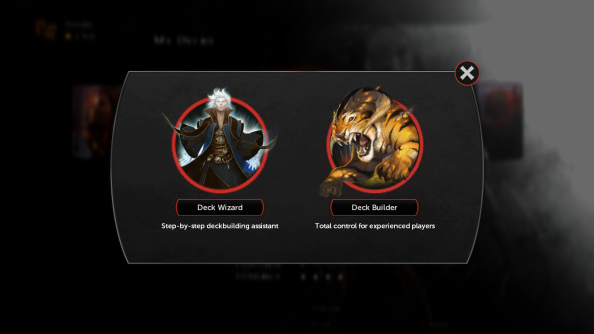 Magic the Gathering’s biggest strength is the versatility of the deck building. Endless amounts of decks can be created, allowing players to put a stamp of their particular play-style. But it can also be a daunting task for a new player, and Wizard’s know this.

“There’s two different ways to build decks in the game: using the Deck Wizard or the Deck Builder. The Deck Wizard is absolutely awesome if you’re a new or inexperienced player to the game, or if you just want to get playing a new type of deck quickly, and then just tune it later on. The Deck Wizard’s choices dynamically changed based on what you’ve got in your deck. So for example, if you have a lot of five-mana-cost creatures, it will suggest more one or two-drops to round out your mana curve.

“The Deck Builder on the other hand gives you absolute control: number of cards, type of lands, filter different card types – build the deck exactly as you see fit.”

You’ll have 30 deck-slots to utilize for your creations, along with the pre-made decks that are ready to go in-game. 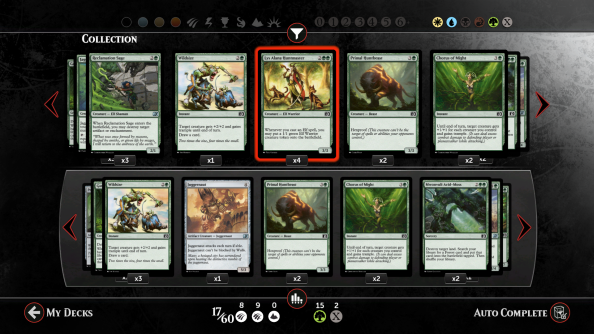 Magic Duels: Origins, from what I’ve seen so far, is definitely a step forward for the series. It no longer feels like a ham-fisted appendage to a much bigger experience. Instead of remaking the same game annually, which usually involved snipping features off, the game can build upon itself and grow.

Now, players from both digital and physical, new and veterans, will be able to enjoy the same content as it’s released; moving between the two mediums has never been easier.

Dan was kind enough to supply me with a retail key for Magic Duels: Origins, which I’ll be playing extensively for the review when the game comes closer to launch – a date which has yet to be disclosed. I’ll be starting tonight, and sharing my experience with you guys over on our Twitch channel. The stream will start at 22:00 BST tonight, so be sure to tune in – to make it easy, I’ve embedded it below.