Magic the Gathering’s upcoming expansion, Ikoria: Lair of Behemoths, launches this month and we have an exclusive card reveal for one of the uncommon cards in the new set. Ikoria: Lair of Behemoths is all about monsters and creatures, featuring Godzilla and legendary planeswalker Vivien, as well as a new planeswalker called Lukka – but of course you’ll need some human soldiers to keep those beasts at bay.

Introducing – drum roll please – the General’s Enforcer. A two-cost card of one white and one black land. If you want to see him in action, check out our MTG card analysis.

The General’s Enforcer is a human soldier, with his main ability being ‘Legendary Humans you control have indestructible’. You can also pay an additional two lands of any colour and one white and one black land to ‘Exile target card from a graveyard. If it was a creature card, create a 1/1 white Human Soldier creature token.’ 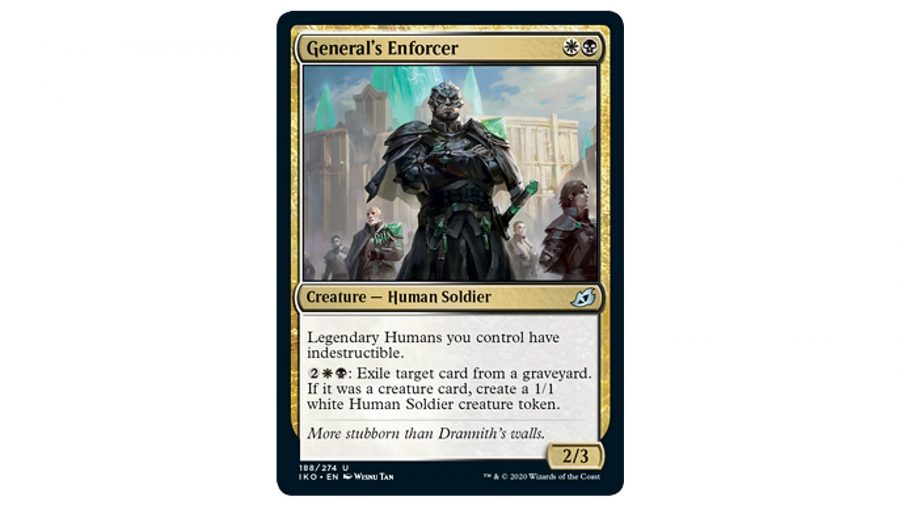 The General’s Enforcer’s intimidating stance is matched by the words ‘More stubborn than Drannith’s walls.’ Drannith is, of course, the city where our new planeswalkers are hanging out. Ikoria: Lair of Behemoths releases April 16 on MTG: Arena.