Magic: The Gathering is the original trading card game, and still the best – released in 1993, it has over 35 million players worldwide. Players simulate battles between powerful wizards called Planeswalkers, and use magical energy to cast spells and summon monsters.

It's a concept that's been endlessly imitated, but never equaled. With its videogame adaptation, Magic: The Gathering Arena, going from strength to strength, and its latest expansion Zendikar Rising returning to the setting of one of the best-received expansions of its past, MTG is as popular now as it's ever been. All that history can make it a little tricky to tell what gifts your Magic-obsessed loved ones might appreciate this holiday season. Hopefully, we can help with that.

This is a list of MTG products designed to appeal to newcomers and veterans alike, in both physical and – for those looking to play Magic: The Gathering Arena – digital formats. Arranged in ascending order of complexity, you'll find starter kits at the beginning, gifts for any and all occasions and levels of experience in the middle, and lavish or advanced products at the end.

Planeswalkers are the protagonists of Magic: The Gathering. They are the player characters, but they are also characters in their own right, with their own cards, playstyles, and backstories. One popular ‘way in’ to Magic is via the Planeswalker decks: pre-built, 60-card decks, each themed around a particular Planeswalker and ready to take into battle.

The exact contents vary slightly across the many different decks issued so far, but they all include a handsome storage box and a code to unlock the deck in Magic: The Gathering Arena so you can find an opponent online right away. Once you’ve got a few games under your belt, each Planeswalker deck also includes at least one booster pack with fresh cards so you can customise your deck (Magic: The Gathering veterans have learned to sustain themselves with this kind of tinkering in place of eating or sleeping). Some Planeswalker decks will throw in a second booster and a handy strategy guide for a little extra money, so be sure to check the product contents carefully. 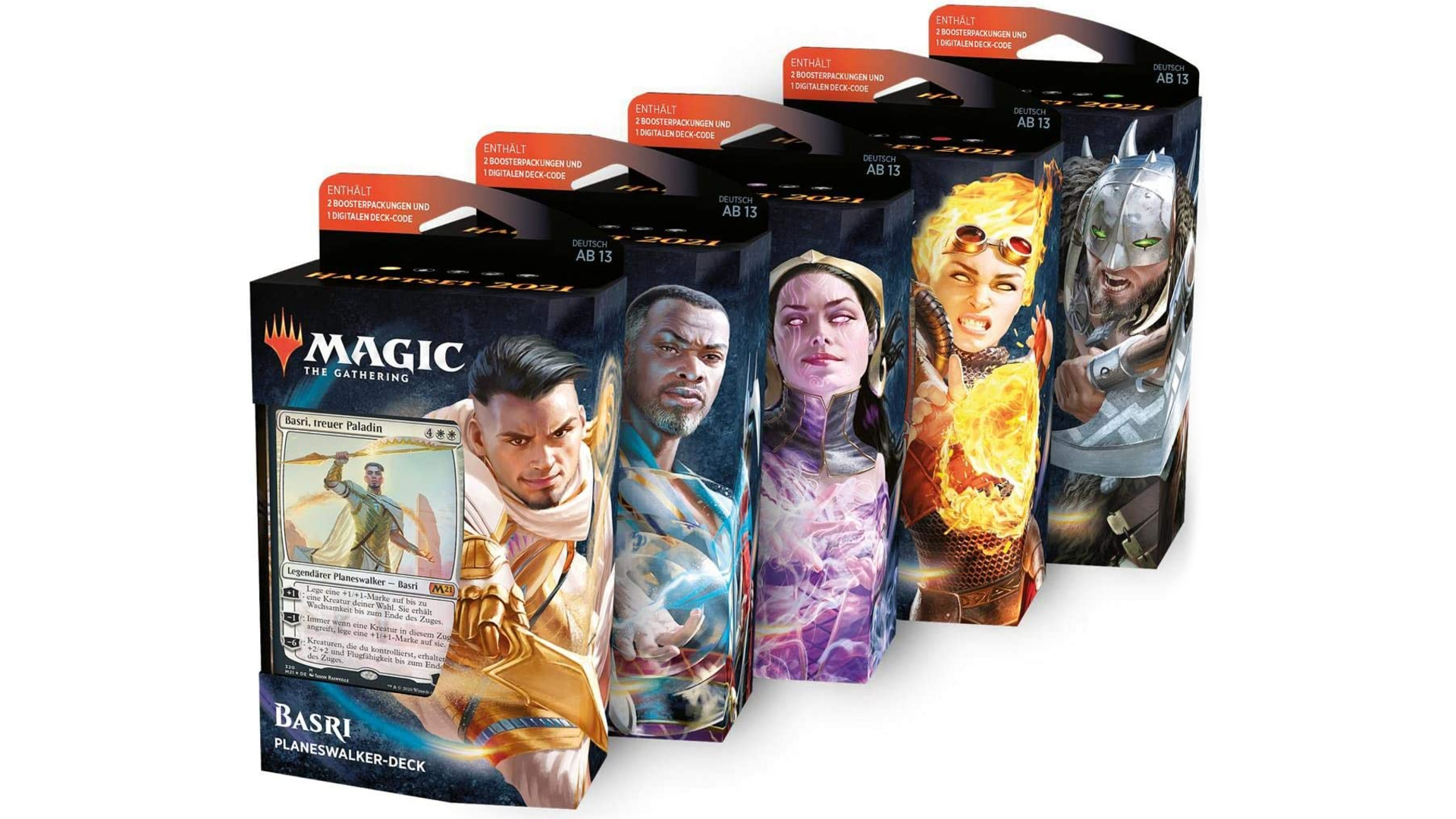 These are excellent gifts for anyone who wants to get into Magic, whether physical or digital. Be sure to browse the available Planeswalkers to find a deck you like the look of, bearing in mind that Magic’s five magical colours broadly indicate the associated playstyle: nurturing White Planeswalkers are all about protecting and healing their creatures; impulsive, freedom-loving Reds favour aggressive full frontal attacks; methodical, perfectionist Blues like to control the game and disrupt enemy plans; nature-loving Greens get powerful creatures which they can empower further; and selfish, amoral Blacks are open to debilitating strategies others reject as taboo, such as necromancy, life-leeching, and debuffing.

Dedicated players will likely have moved beyond this introductory level but may still appreciate a Planeswalker deck they don’t have if it fits their favoured playstyle, so try asking subtle questions to gauge their tastes. For example: “what’s your favourite colour?”, “Would you rather take a holiday on a lovely blue island or a foetid black swamp?,” and “How’s the necromancy going?” 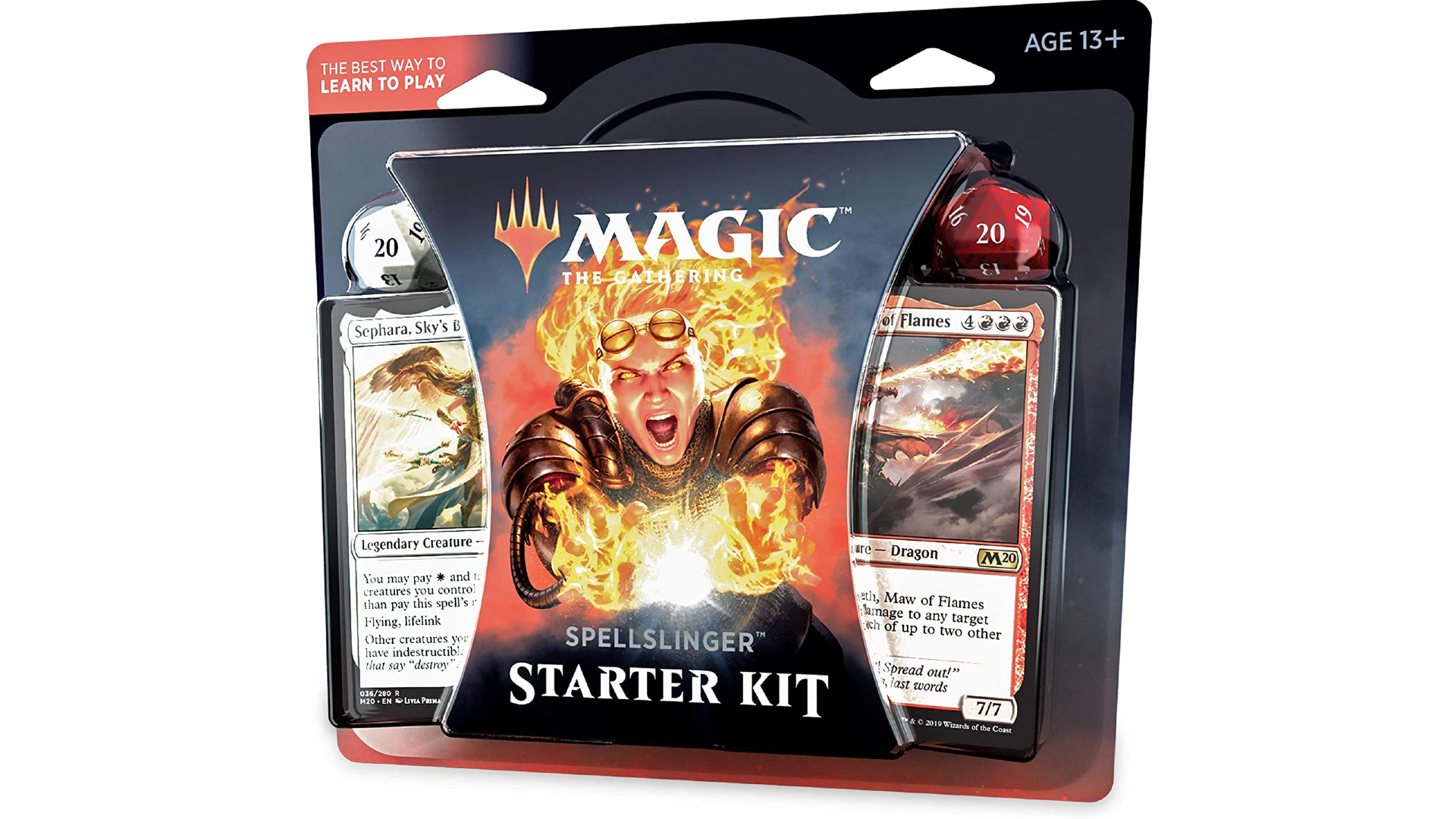 If you fancy trying two of the aforementioned colour playstyles, or you’re considering getting into Magic with a friend or family member, the Spellslinger Starter kit could be for you. It contains two ready-to-go 60-card decks, one in White (Angels!) and one in Red (Dragons!), as well as a quick-start guide for each and two rulebooks. Again, you also get a code to unlock both decks in Arena, and two 20-sided dice to keep track of your remaining hit points (or use in your next D&D campaign). It’s cheaper than a Planeswalker deck, but doesn’t get the booster pack(s).

For beginners and videogamers: Magic: The Gathering Arena Starter Kit
Similar to the Spellslinger kit, this package is further optimised to get you into Magic’s digital version. This Arena Starter Kit contains another two pre-drafted physical starter decks of 60 cards each in another two colours: Green (great big, vaguely nature-themed monsters!) and Black (demons and undead!). As you might guess by now, you also get two codes to unlock these decks in Arena, plus an introduction guide to the game in both its tabletop and digital versions.

It’s very slightly cheaper than the Spellslinger kit, but doesn’t include the D20s or the deck-specific starter guides or the rulebook, preferring to condense its intro materials into that one guide. The much more important difference is that its decks are different colours, so we’d suggest you let that be the factor that guides your decision: Red and White (Spellslinger), or Green and Black (this one)? 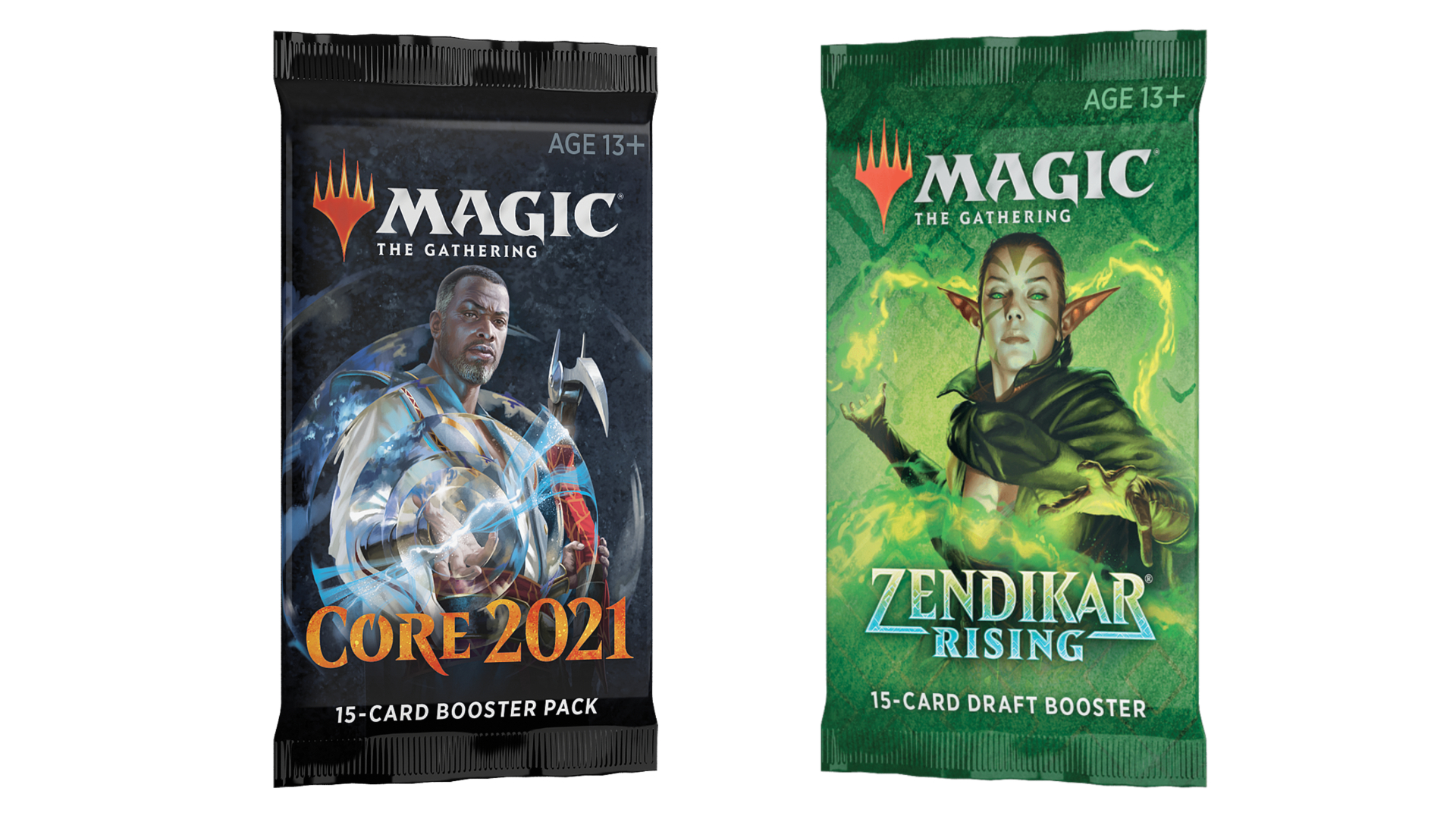 For all occasions: Draft Booster

The humble and honest Draft Booster pack is the basic unit of Magic: The Gathering. It is the day to the calendar, the atom to the physical sciences, the fart joke to Adam Sandler’s career. Each Draft Booster contains 15 standard cards, is the standard means by which Magic players bolster their collections, and it’s probably true that literally any player would welcome one. Draft Boosters are perfect for taking part in drafts with other players. You can play it safe and opt for Core Set 2021 boosters, as these will be relevant throughout the coming year, or if you know the Magic fan in your life is playing the latest expansion, pick up a Zendikar Rising Draft Booster.

Imagine if a draft booster got kissed by a unicorn. Thusly touched by magic and exoticism, Collector booster packs offer the very best cards in Magic: The Gathering. Again, they contain 15 cards, but they’re guaranteed to include at least 11 foils, four rares or mythics, six special alternate-frame cards, and one full-art basic land. Collectors will find card styles and artwork in these packs that can’t be obtained anywhere else, while eager competitors will find powerful cards for their decks. A gift that’s certain to be appreciated by avid Magic players. You can opt for the Core 2021 Collector booster or the Zendikar Rising Collector booster. 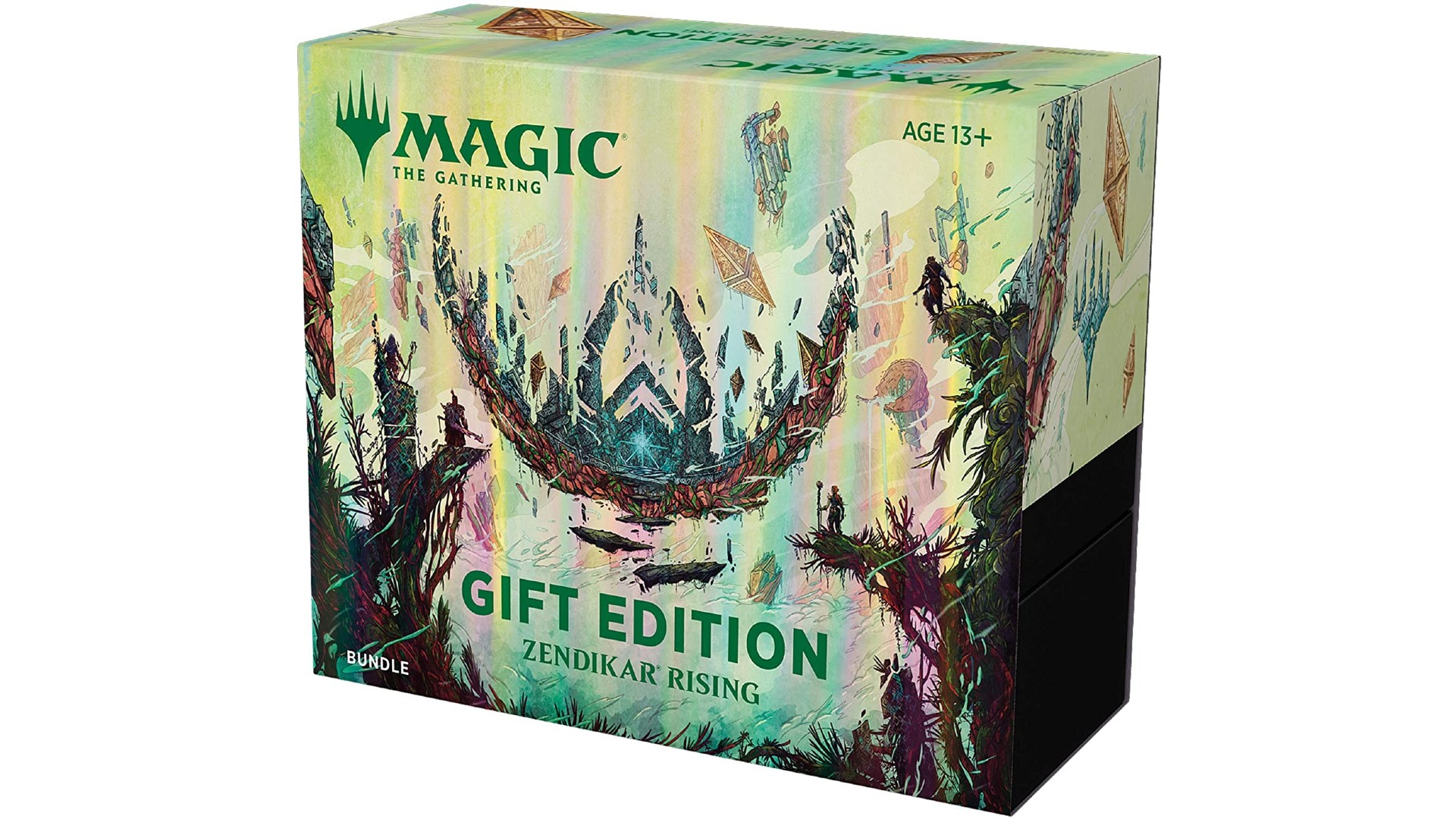 The Zendikar Rising bundle: Gift Edition is a lavish gift for dedicated Magic players who can’t wait to return to Zendikar in style. This box contains ten Draft Boosters and two land packs (offering 20 foil and 20 non-foil regular-frame lands) to get your Zendikar Rising card collection off to a mighty start, as well as a Collector booster and an alternate art promo card for a final flourish of premium quality cards. You’ll also get two double-sided reference cards and to help keep on top of everything as you play, and a D20 to count down your dwindling life points.

This lot should get you off the ground in no time at all – now go forth and battle!