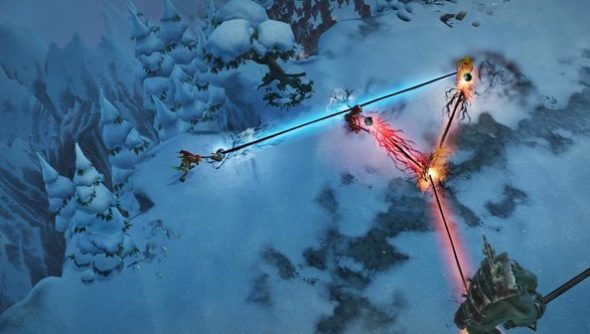 Magicka is a game in which you, a jawa, must combine elements in certain arrangements in order to cast spells on enemies and friends. The idea is that your spell combinations murder the enemies and heal the friends, but often, and to much comical effect, the opposite can happen.

On the face of it, Magicka 2 shares most of its DNA with its magicalising predecessor. It’s a top-down-semetric, co-operative hack-n-slash adventure with a stupefying array of possible spell combinations. Mix fire and water and you’ll fire a blistering hot jet of steam, electrify a pool of water with a lightning spell and you’ll frazzle any witless bathers. 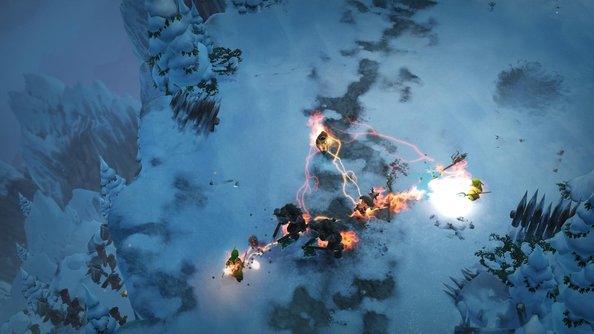 You can launch molten balls of magma, arcane beams of deathly energy, area of effect healing spells, walls of ice and seismic blasts. Hilariously, you can mis-target all of these different combinations of elements. Try to cast lightning spells while wet and you’ll short circuit, mildly electrocuting yourself. Point your fire spell in the wrong direction and you’ll erupt into flames, arguable one of the very few instances in which self-immolation is funny.

There are eight elements to choose from, and you slot these elements into five spell slots. Once you’ve combined elements you can cast them in four different ways: either outwardly in beams and projectiles, around you as an area of effect spell, directly on yourself, or on to your weapon. It’s a complex system that takes a lot of getting used to, and one that results in comical friendly fire between novice players.

New to Magicka 2 is the ability to move and cast spells at the same time, which paves the way from some cleverer and more demanding environmental puzzles. In the short demo I played, we were tasked with opening a gate by means of turning a large wooden water wheel. The objective was complicated by a small army of crabs who’d stream forth from a puddle, all angry and weirdly defensive about their stupid wheel.

The wheel could be turned by taking the water element and casting it in a wet pillar as hard as you could. But doing this leaves you vulnerable to crab attacks from behind. Your beam attacks turn at laboriously slow speeds, which makes Magicka 2 less twitchy and more tactical when it comes to aiming your spells. 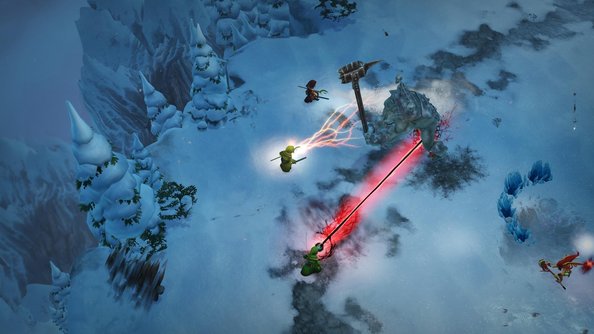 My co-wizard, Paradox’s Peter Cornelius, whose name is really that, was at the receiving end of most of my wizardly blunders. It was his job to keep the crabs at bay while I incited the wheel to turn with my powerful spume, which he did using a variety of demonstrative tactics. He could freeze crabs using the ice element before shattering them, which I impeded whenever I came away from my wheel turning duties and tried to assist by blasting the frozen enemies with flames, which would gently thaw them out.

Magicka 2’s world is more expansive and appears to have allowed the developers a bit more room for ingenuity. You can blast enemies off cliffs and into chasms. Bomb-chucking enemies can have their explosives volleyed back towards them or defused with a well aimed squirt of water. Certain enemies are weak to certain elements: the undead are immune to death attacks but particularly vulnerable to holy life energy. Fiery beasts will be healed by your fire-beams but will quickly succumb to water based attacks.

When these immunities and weaknesses combine in strange ways, you’re forced to outthink the developers by combining spells in ways you hadn’t considered. In this fashion, Magicka 2 rarely allows you to fall back on one do-it-all spell, instead it confounds your muscle memory and requires that you think about the elements you’re throwing together, and what they might do. Trial and error is encouraged. 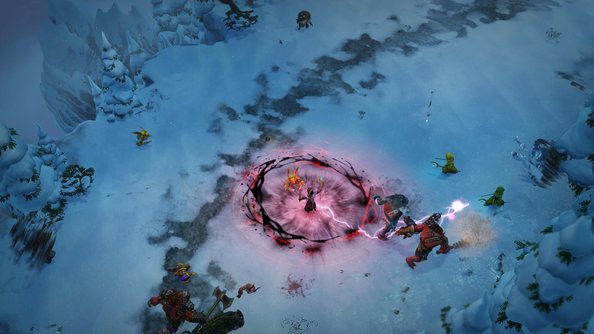 Friends can jump into and out of your game, and the game will reconfigure on the fly to adjust the difficulty for this new number of players, either by increasing the number of enemies on screen, making enemies stronger, or both.

As well as this, loads of new optional objectives have been introduced, with things like Dark Altars pushing players to complete specific challenges. Game modifying mutators can be found, and these range from the straightforward, such as one that increases the game’s difficulty, to the comedic, such as the one that adds a sitcom laughtrack.