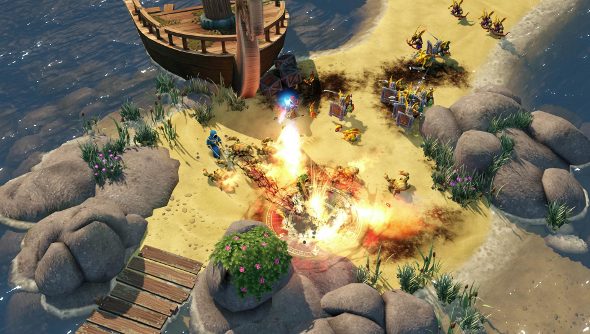 Magicka was a compelling reason to live a solitary life, absent friends. It stripped away the platitudes, evenings in the pubs and all the social niceties of friendship, leaving only the desire to make mates explode by striking them with magical lightning. Harrowing stuff, but dressed up with jokes about vampires and funny men in colourful robes.

The second game, third if you count Magicka: Wizard Wars, the free-to-play spin-off, is ostensibly more of the same. You create and cast spells at friends and foes alike through tongue-in-cheek fantasy levels. But there is one place where Magicka 2 is mixing the alchemy up: artefacts. These unlockable thingamabobs add potentially game-changing elements to levels and challenges, serving as the building blocks of, if not user-created levels, at least user-created fights.

Two games of Magicka 2 running concurrently create a lot of racket. Battle roars, curses of frustration, shouts of REVIVE, REVIVE, REVIVE – it’s enough to burst the ear drums of people standing across the street. And it’s great. There was a slow build up to the noise, though. 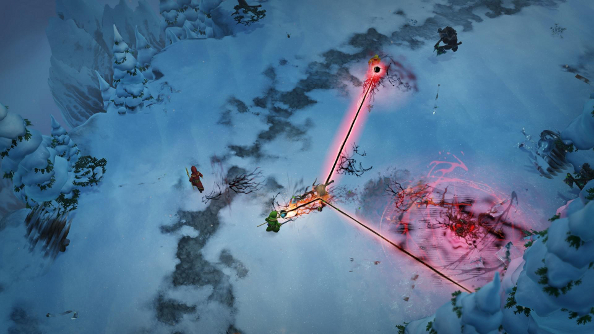 At first, we were guided through a cavernous level by developers, introduced to foul subterranean enemies and several gigantic, battle-scarred crabs, and it was all reminiscent of its predecessor. It was prettier, sure, and much quicker now that spells can be cast while moving, but it was still very familiar. Essentially lots of fun, though, and much of that came from pushing each other off bridges with magical gusts of wind.

With the level complete, we were introduced to the artefact system and then, finally, let loose on it. Artefacts can be unlocked during the regular game, through killing bosses and beating tricky challenges during the campaign. Some of them are hidden away, while some are simply difficult to unlock. “There’s just no way you can see all that Magicka 2 can be in one playthrough, because: artefacts,” producer Peter Cornelius tells me.

Artefacts run the gamut from making everything fat and sluggish to increasing enemy damage output to the point where one hit will kill. There are stat boosts and resistances, spell limitations and ones that overcharge spells, ones that make you fast and ones that make enemies slow – barely any element has been left untouched. 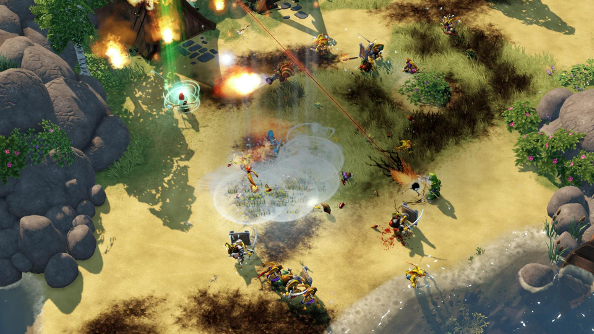 The impact of an artefact, in most cases, is determined by the level. Selecting the first level of a health artefact, which makes wizards a bit hardier, will just increase their health a wee bit. Crank it up to level five, and they become robed damage sponges.

A few artefacts have just been thrown in for laughs, like visual modes and the audience mode, which adds a laugh track as well as audience jeering. “It’s actually one of the most advanced systems in the game,” says Cornelius, laughing, when I ask him about the mode. He explains that the audience will react accordingly to different situations, mostly driven by their bloodlust.

It sits somewhere between a giant list of cheats and a debug mode, and just throwing a bunch of random ones into the cauldron produces some bizarre results.

We were given a challenge map with waves of enemies to experiment in, and within moments we were completely lost. With speed pushed up to maximum, our wizards were colourful blurs, streaking across the map, and rarely did we have a clue where our little spellslingers were. Some of the combinations were downright deadly, too. One artefact teleported us to the location of a slain enemy, which by itself can actually be handy, but when another artefact made the corpses of enemies explode, things suddenly became rather dangerous. 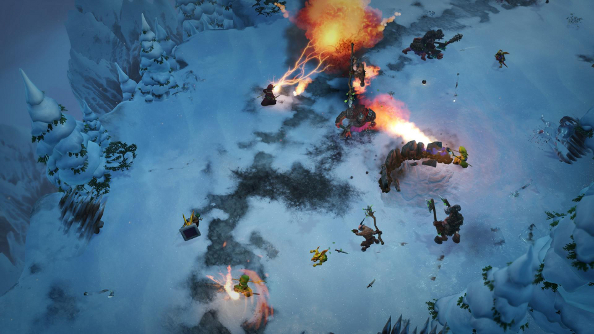 Challenge maps are only lost when all wizards are dead, and with the revive magick, death was usually fleeting. But the nasty beasties assaulting us had sharp teeth, big axes and lots of explosives. Even without artefacts, the waves of ravenous monsters posed a serious threat.

The map we played on sent legions of diverse creatures after us, from towering giants to gibbering rodent things, most with tricks up their sleeves and in their bracers. Fighting so many different things puts a lot of strain on a wee wizard. We were constantly switching our magical attacks to deal with enemy resistances, and we really needed to explore the entirety of our spell book to get through each wave, rapidly combining elements to make new shields and spells of mass destruction.

Then there was the friendly fire, which was anything but friendly. Beams of arcane energy covered the screen in a magical lattice, while molten rocks bounced around the battlefield and walls of fire suddenly erupted out of singed ground. It was like the Danger Room, if Professor Xavier was a drunk sadist. Letting people kill each other has been a big consideration for the developers. “One of my favourites, is you put friendly fire up to 1000 percent, and then you turn healing elements off,” Cornelius confesses. “When you just touch someone with 1000 percent, they just explode.” People can be cruel. 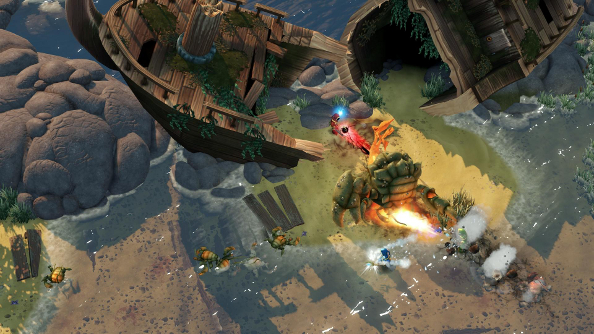 The artefacts started off as a long list of novelties, but by the second attempt at the challenge map, we were giving them more thought; we were starting to think tactically. If we make an enemy drop a healing area of effect spell upon death, for instance, that works well with the aforementioned teleporting artefact. But! That AoE also heals other monsters. So if we kill a foe in a crowd of his chums, and then we teleport right into the middle of them, then we’re facing a horde of healed nasties.

“Basically, you make your own spells, and the artefacts go really well with that,” says Cornelius. “You’re making your own game mode.” This isn’t restricted to challenge maps. The campaign can likewise be altered with artefacts, so no aspect of the game is left alone – it can all be tampered with.

It seems like it fits comfortably into Magicka. Even before we got to fiddle around with artefacts, we were making our own games within a game. During the cavern level walkthrough, we decided to end with a battle royale, which ended in a tense duel against the two survivors in the perfect setting: right on the edge of a cliff. But artefacts make it easier to create bespoke challenges, some silly, and some – perhaps most – very bloody.

Travel and accommodation was provided by the publisher