Wizards, much like magpies, are always on the lookout for something new and shiny, so Paradox North has given the murderous, psychopathic spell-flingers of Magicka: Wizard Wars – a game we’re rather fond of – some pretty baubles to collect. These are no mere ornaments, though; we’re talking about elemental crystals that unlock powerful Magicks. Tools of devastation, then.

And since it’s Christmas, the imps are wearing Santa hats and festive cheer permeates throughout the blood-soaked battlefield. Awww, lovely. 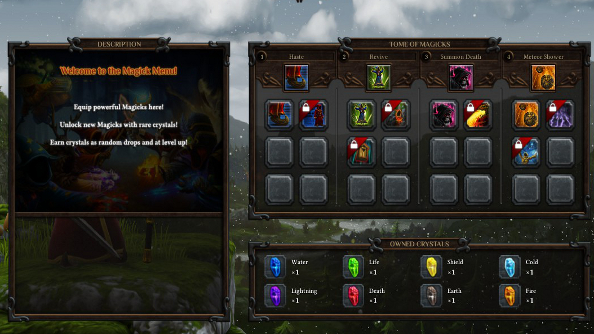 If you pop into Wizard Wars now, besides seeing a cheeky imp getting into the spirit of Christmas, you’ll perhaps spot the new Magicks screen. From there, you can unlock and select new Magicks, from a teleportation spell or a frosty assault of hail to add to your magical arsenal. These Magicks can be unlocked by collecting the aforementioned crystals which will occasionally drop mid-battle or be rewarded when your wizard levels up.

The holiday-themed content extends beyond imps in fancy dress, with snow covering the battlefield and a new weapon being thrown into the mix: snowballs, the deadliest tool in any wizards armoury. Chuck a snowball at a foe, and they’ll be frozen on the spot, making it much easier to make them explode into grime and viscera. Merry Christmas, indeed.