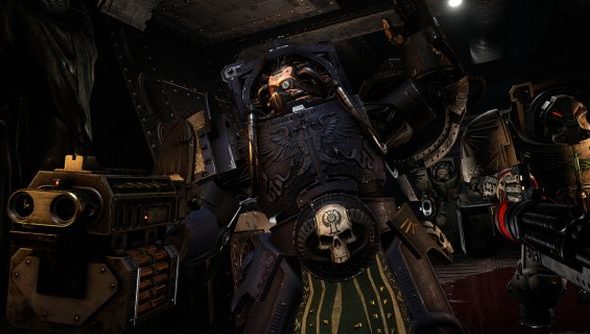 They say it’s best to know your enemy, but what’s there to know? If an action game antagonist isn’t bearing down on you with a shotgun, you can be pretty sure they’re peppering you from behind a pillar at regular intervals instead.

But then Alien: Isolation happened. And Shadow of Mordor. 2014’s two sleeper hits came from developers willing to make their monsters think. And now Streum On Studio have similar ambitions for Space Hulk: Deathwing. There’s a mind behind the swarm, and it’s powered by Unreal Engine 4.

Deathwing’s developers have past form when it comes to playing with behaviour states. Streum On made E.Y.E.: Divine Cybermancy – an ambitious low-budget FPS that endowed enemies with individual courage stats and a choice of twelve tactical approaches.

The game drew Deus Ex comparisons back in 2011, as well as the interest of Focus Interactive and Cyanide.

“They contacted us because they had the IP to make a game in Warhammer 40K,” explained Streum On’s Christophe Longuépée. “We said yes, we would be interested – we are really into that universe.” 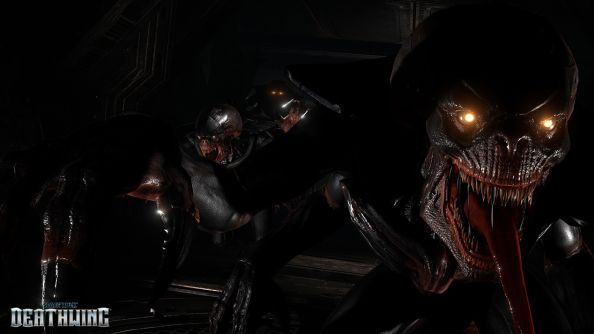 The plan was to build an FPS atop the dormant Space Hulk license – the team weren’t aware of last year’s turn-based adaptation when the project started – but Streum On soon determined that it would “not be interesting” to simply reimagine the original board game as a shooter.

Instead, after considering “many designs, many stories”, the team eventually tracked Space Hulk’s signal back to the 1993 DOS game from Electronic Arts.

EA’s Space Hulk was a claustrophobic and cruel tactical shooter. It encumbered players with a restrictive Terminator suit, and gave them jamming weapons with which to dispatch ever-encroaching genestealers. The monsters were Giger-esque, with too many limbs and a movement speed to match.

“It was really great and oppressive,” said Longuépée. “We wanted to play with that claustrophobic aspect. Small corridors and big rooms to make some contrast.”

Streum On decided to incorporate some of EA’s tactical mechanics into the new game, too, and studied SWAT 4’s approach to squads. But they were determined to “keep the sense of what an FPS is” – Doom remains their single greatest influence.

Early on, the studio flitted between engines – prototyped their first-person Space Hulk in CryEngine and then UDK. But they were persuaded by Epic to transfer their efforts to the new and untested Unreal Engine 4.

“We were a bit afraid,” said Longuépée. “But UE4 was already more interesting than Unreal Engine 3 then. I would say there was a graphical aspect; the lights and the materials, everything seemed cool and really intuitive.”

The work was tough to begin with, particularly for the graphics artists forced to “break their habits” and adapt to a new way of working.

But when Deathwing’s first trailer was released last Summer, it revealed a dev team having fun with the new level of detail UE4 offered – carving Imperial prayers into bullets and zooming the camera uncomfortably close to slime-slick genestealers.

“We wanted to push it to the maximum,” said Longuépée. “We have the feeling that [detail] is something that, if you have it, makes the player feel the game a different way. Even if they don’t really notice the subtleties.”

Players are more likely to pick up on nuances in enemy behaviour – especially on higher difficulty modes. “What is really difficult with the genestealer is that it has many beastlike aspects but it’s also an intelligent creature, and we want to make the player feel both,” said Longuépée. “They are not stupid animals, they are really complex.”

UE4’s simplified programming tools in Blueprint have given Streum On the freedom to build their own AI trees with relative ease. The studio have developed a system that won’t gobble resources too readily, but will allow for lots of variation in behaviour.

“We want to put in that kind of randomness,” said Longuépée. “So each time you are in a place you will not see the genestealer acting in the same way. They will adapt their behaviour.”

Enemies will take into account whether or not they’re outnumbered. While 10 or 20 genestealers might choose to swarm the player, a single genestealer facing four Terminators won’t make the same decision.

Elsewhere, there’ll be genestealers with bio-mods. Streum On won’t talk specifics, but say each will be designated special behaviours in the team’s AI tree. Players will learn to recognise specific enemy types through changes in their colour or facial features and adapt their tactics accordingly.

“We want to make the player feel like there is a swarm of intelligence, but that each character has a specificity of its own,” said Longuépée. “We’re perfecting each one of their advantages.”

To ensure their designs don’t drift too far from Games Workshop’s universe, Streum On have revisited the “different visions” of Space Hulk across 40K’s models and novels, and regularly delved into their own collections.

“We’ve played Warhammer 40K since we were teenagers,” said Longuépée. “Each time a new edition was out we made a trip to the shop and we’d buy it to have a look and to read the new rules. We have a lot of codexes for inspiration. A good library, I would say.” 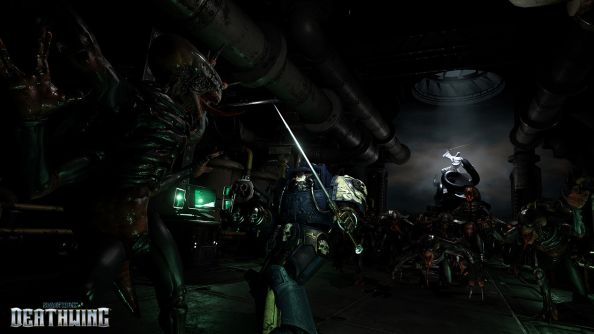 Outside of Warhammer, Streum On looked to System Shock, BioShock and “of course” Aliens for their sense of place.

“We want to make the player feel the strangeness,” said Longuépée. “We don’t want to make something really photorealistic, but we want to create the feeling, ‘Yeah, it makes sense where I am, I am in the universe, I really feel it’. So Unreal Engine 4’s renderinghas really helped with that.”

With no fixed release date in sight, there’s still a lot we don’t know about Deathwing. Longuépée wouldn’t let us know whether or not we’ll be in direct control of a squad of Terminators, for instance – but said the studio had fought to make teammates “useful”.

“They shouldn’t block you, and you shouldn’t feel as if it would be better if they were not there,” he said. “It’s been really hard to develop and we’ve had a lot of frustration. It’s something that we’re proud of at this time, but we still need to work on.”

Though far from finished, Streum On are already excited about their progress with Deathwing’s behavioural systems.

“We have really worked with the AI to get behaviour that changes in many circumstances, in order to have different creatures work together to achieve a result,” said Longuépée.

“We are building architecture to take account of the swarm, to make the player feel that the genestealers are connected together. They act following something bigger, something not really perceptible, but something that is there.”

Space Hulk: Deathwing is slated for a 2015 release. Unreal Engine 4 development is available to anyone for a $19 monthly subscription fee.

In this sponsored series, we’re looking at how game developers are taking advantage of Unreal Engine 4 to create a new generation of PC games. With thanks to Epic Games and Streum On Studio.