The grass is green – but the sky is dark and the land dusted with ash. It could pass for Iceland, if not for the craggy rhinoceri and monolithic rock formations, jutting at right angles out of the land like the remnants of a gigantic game of Tetris.

As the player approaches an outcrop doubling as a dungeon entrance, he finds he’s not alone. He squints up a stone staircase at another adventurer. A torch illuminates the figure’s face – one of few light sources in a world with no sun – but reveals nothing. The second player is featureless, a mute blank with a concealed agenda.

The dungeon door behind needs four hands before it’ll open. The figure hops down a step and offers a hesitant wave. There’s no doubt they’ll both live longer if they work together. But can they?

That’s the view of Ashen we had during Microsoft’s E3 conference this year. It’s an action RPG about a wanderer looking for home in a land where nothing lasts – “no matter how tightly you cling to it”. It’s a game about forging relationships – with other players doing their own wandering, and with the NPCs you’ve led back to camp to contribute. In both cases, you’ll have to make a decision about whether or not you can rely on them.

And Ashen is a game about combat – high risk, skill-driven combat that pulls from some very contemporary and very old places.

“Games like Dark Souls and The Windwaker that have a slower, more tactical approach to combat have inspired us,” said Aurora44 co-director and Ashen lead artist, Leighton Milne. “One wrong move can cost you your life.”

A scrap with even the lowliest skeleton is a gamble. Aurora44 plan to mitigate that constant challenge with a range of fighting styles players can swaddle themselves in. 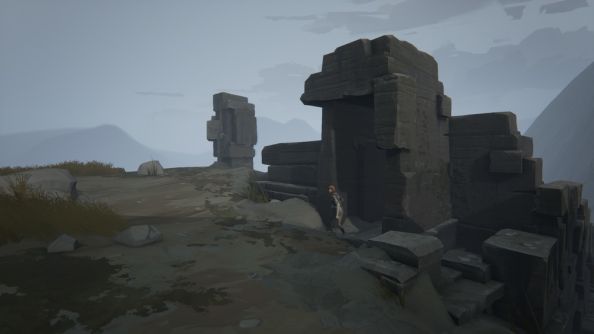 “Both defensive and offensive play styles are rewarded equally,” said Milne. “Choosing a style which the player is most comfortable at will increase their chances greatly.”

It’s more than possible to tackle this burnt, embattled world alone – but it’s far more manageable, not to mention tantalising, to do so alongside a fellow player. Once you’ve found one, it’s a good idea to hold on tight; it’s likely you won’t survive if you split up.

Ashen’s announcement trailer is almost a how-not-to guide. Once inside the dungeon, the wanderer makes fatal mistakes – allowing his new comrade to run ahead, before turning his back on a slouched skeleton.

“The core of the game is to meet others out in the world and cooperate to overcome the odds,” said Milne. “Multiplayer and player to player interactions [were] the foundation we built upon for Ashen.” 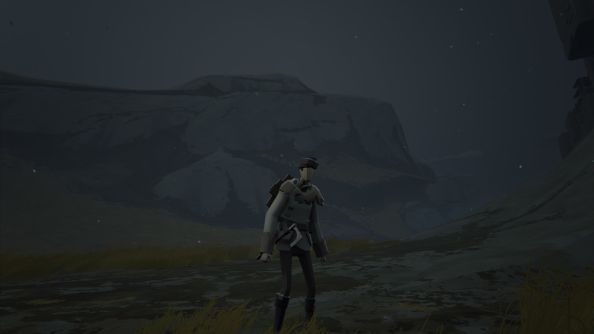 That interaction sits somewhere between Journey and the Souls games in its implementation. It’s designed to be as organic and unobtrusive as possible. Unromantic necessities like lobbies and names are hidden from view.

“While out exploring the world, if you happen to run across someone, you can journey together,” explained Milne. “If you enjoy playing with them, simply sticking close will keep that connection alive. How the player acts will determine how other players perceive him.”

Ashen’s broad-stroked art style supports that ambiguity in communication. Past player behaviours lie inaccessible beyond those empty faces – each new acquaintance a slate upon which to draw your own conclusions.

“We are really big on implied detail and leaving enough room for the player’s imagination,” said Milne. “We want the players to judge each other not on looks, but on actions. Faces by nature have certain characteristics and stereotypes bound to them – we want to cast those aside.” 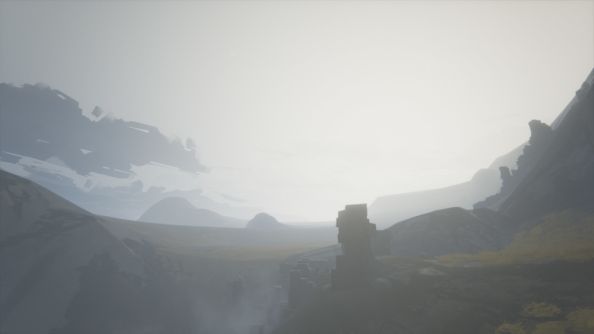 The peculiar aesthetic wowed at E3 with its fuggy vistas and mitten-handed men and women. It was developed over many iterations with the aim of reinforcing the game’s unusual values. While the world of Ashen is highly stylised, Aurora44 hope it’ll also feel lived in.

In the closing moments of the trailer, the birds in Ashen’s heavy sky are joined by a gigantic, feathered beast. Its has long horns and the whisker-like barbels of a catfish – but drifts slowly through the air like a whale through water.

That land, which Aurora44 have built using the streaming tech in Unreal Engine 4, will be entirely open for players to explore. Plotlines will offer players a direction to head in, but meander about the world and interact with its inhabitants and you’ll discover secrets and stories. 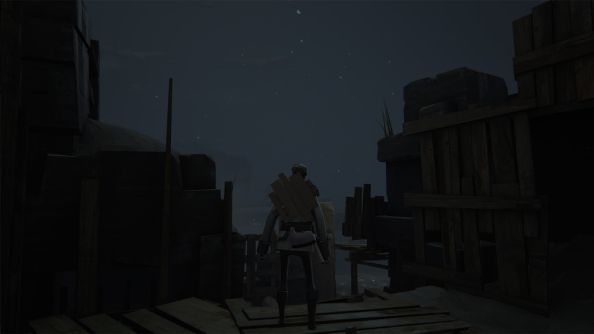 The New Zealand studio are writing a narrative with just as many forks and junctions, that’ll ask players to accept consequences as well as rewards.

The greatest reward in Ashen is company. Players can bring those they trust back to a growing town, where they’ll become NPCs capable of blacksmithing, foraging or leading expeditions. But trust isn’t always enough.

In Ashen’s E3 trailer, the second player can only look impotently back over a chasm at the adventurer who put faith in them – now hunched over an undead blade protruding from their chest. Make no mistake: this vitamin-D-free land is tough.

Ashen is expected in 2016. Unreal Engine 4 development is now free.

In this sponsored series, we’re looking at how game developers are taking advantage of Unreal Engine 4 to create a new generation of PC games. With thanks to Epic Games and Aurora44.

{"schema":{"page":{"content":{"headline":"Making it in Unreal: band together with strangers to survive the sun-free land of Ashen","type":"news"},"user":{"loginstatus":false}}}}