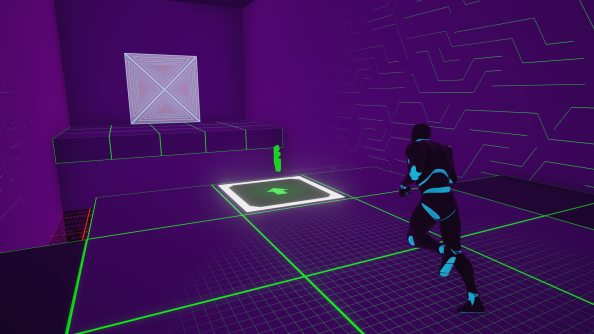 There’s a hole in the world. You can’t go around it: two borders, bright red and unyielding, bookend this virtual room. And you can’t go under it: looking down, you notice the walls thin to almost nothing, as if disintegrating into the blackness. That’s a bad sign.

So you’ve got to go over it. Luckily, you’ve got access to a level editor.

“The game in its simplest form is, you want to cross a gap,” explains Blair Inglis of Edinburgh’s Mystic Penguin Games. “It’s too far to jump across. So what you can do is, you can place a platform down, and you can use that platform to get across.”

Your standard platform – an extra block in a world divided into squares – is the simplest node in your construction kit. You also have access to launch nodes, which fire you forwards, and jump nodes, which propel you upwards. And as Membrain’s puzzle-platforming progresses, you’ll be folding the likes of blink nodes into your designs – Dishonored-inspired teleport pads that can punt you straight through walls. 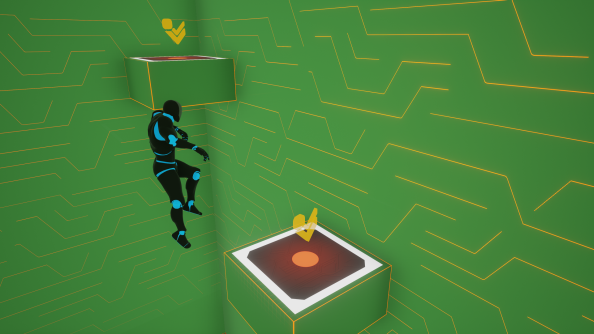 All of the nodes have different, predictable effects, and can be used in conjunction to ping yourself to an objective, or transport a cube to a button, or unlock a door in roundabout fashion.

“As you go on, the levels get more complex, and you’re having to combine nodes together,” says Inglis. “It’s definitely about the combination.”

Plonking a cube onto a blink pad might fire it forwards onto a launch node, which in turn pings it over a pit to your objective. Suddenly, you look back and find you’ve built an abstract Rube Goldberg machine.

Your designs can’t be overly wacky, though. You’re encouraged to think concisely by a resource system. Each node has a value, and you can’t exceed a specified figure for a level. Think Sword Coast Legends’ dungeon master mode, but with springboards instead of goblins. 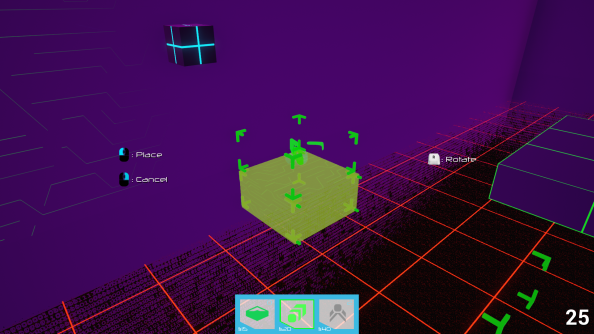 That means you can’t simply build yourself a bridge over that gap, or place jump pads willy-nilly. But within that stricture, there’s scope for experimentation. Puzzle isn’t really the right word: your average game puzzle offers one goal, and only one route there. Membrain’s challenges are better described as problems, waiting to be solved in one of a number of ways.

“It’s interesting for us, because we don’t know how people are going to play it,” Inglis points out. “I think when people get their hands on the game they’ll surprise us. That’s quite exciting to think about.”

Although Mystic Penguin’s design duo looked at what other puzzle-platformers did well, the fact that players had power over their levels “was something completely new that we had to think about”. Eventually they found a successful formula: building solved problems, and then taking bits away.

Membrain’s art style – bold and bare, with environments divided up into squares – looks almost as if the studio have exposing the workings of their game to players. Inglis says that was the intention. 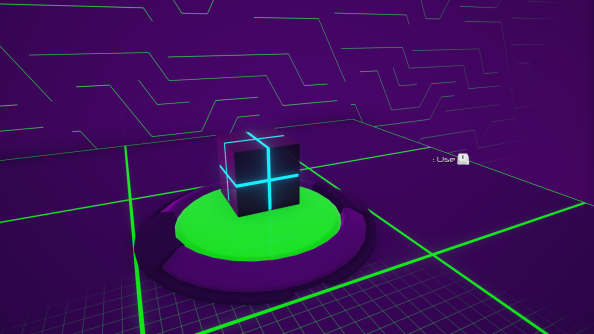 “We’re staying away from realism,” he adds. “Obviously that has its place in other games, but me and Graeme [Watt, co-developer] share the philosophy that games can be anything you want, and they should be. So why would you create a hyper-realistic landscape when you can create something from your mind that people haven’t seen before?”

The pair have ambitious plans for story. As you switch viewpoints, you’re also switching characters – from the first-person PROTO (“He’s the player conduit character, so he’s very quiet”) to the overhead robotic companion, AANI. That stands for Another Artificial Networking Interface, since Mystic Penguin are “very aware that companions are quite a well-used trope in not just the medium but the genre”.

AANI begins the game more than a little miffed that she’s been hacked for the purpose of problem-solving- but the two will learn to work with each other over the course of the game. Together they’ll upend the deepest secrets of this synthetic world – including whatever barrier’s behind the ‘membrane’ part of the title’s portmanteau (Inglis won’t tell me). 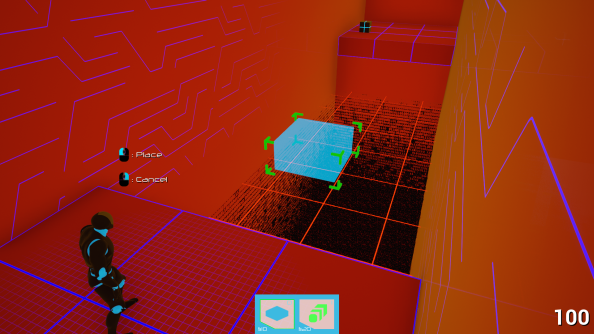 “The focus is definitely on AANI – she’ll do most of the talking,” he divulges. “But it’s also about the Membrain itself. It’s about discovering what this mysterious place is, why you’re there, what’s going on.”

Inglis and Watt are working in Unreal, as they have done since they began Membrain as a final year university project in UDK. More than a year later, they’re tremendously proud to see their first game coming together, with “music and voice acting and sound effects and such”. They’re enjoying development, and really what they’ve done here is build a lite level editor in Unreal 4 – so that players can tap into the same reasoning process that excites them so much.

“Well, that’s it,” says Inglis. “Naturally we enjoy making games, that’s what we do. Hopefully the players will find that as well. It’s problem-solving, and problem-solving is always at the core of game design. Even when I’m creating the levels and the puzzles, it’s, ‘How do I do this?’.”

Membrain could do with your vote on Steam Greenlight. Unreal Engine 4 development is now free.

In this sponsored series, we’re looking at how game developers are taking advantage of Unreal Engine 4 to create a new generation of PC games. With thanks to Epic Games and Mystic Penguin Games.