There’s a point, once you’ve made a highly successful Warhammer game, when the sweet shop of Games Workshop licenses opens up to you. After Warhammer Quest did “pretty damn well” for Rodeo Games, they returned to the Nottingham font of wargames to talk about what they might do next.

“They just sort of said to us, ‘You’ve pretty much got carte blanche here to do what you’d like,’” remembers Rodeo co-founder Ben Murch. “‘What is it you fancy?.’”

Rodeo toyed with the idea of dusting off Mighty Empires, the Total War-ish metagame for Warhammer Fantasy. They looked into an adaptation of 40K Epic, which would have been the first since the fantastic Final Liberation. And they played a few games of Necromunda, the neglected Hive City skirmish classic that regularly sets PCGamesN comment sections alight. 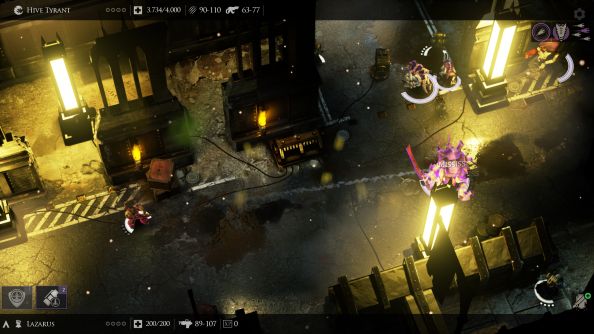 “We kind of fancy going back into sci-fi again,” they decided, and Games Workshop pointed them to a corner of the 40K archives that nobody else was touching. The Deathwatch are the military arm of the Ordo Xenos – the inquisitorial sect charged with the ultimate extermination of all alien species (which, yes, is also the role of everybody else in the Imperium – but presumably this lot take a macro approach to the problem). The Deathwatch induct veterans from several Space Marine chapters, lending them a mismatched wardrobe and a sense of seen-it-all ruggedness.

“It really spoke to all of us,” says Murch. “It’s this sort of Dirty Dozen in space adventure. Going behind enemy lines, being the best of the best, that sort of thing.”

We’ll pause, now, to allow readers a moment to weep openly at the idea of anybody passing up a Necromunda adaptation when they had the chance. It’s another blow, after Space Hulk devs Full Control were forced to close down before they had their shot. But you have to understand: Rodeo had just come off Warhammer Quest, which they’d translated with very little deviance from the board game. 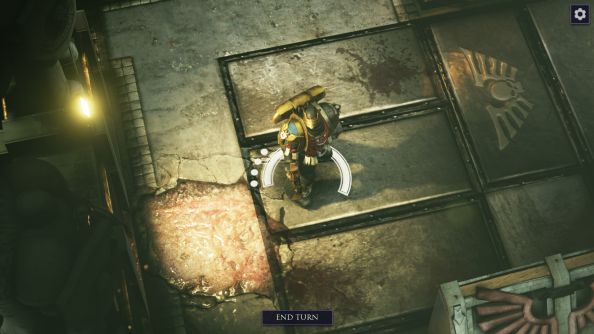 “It was partly just down to us being a little bit nervous, really, about messing it up,” recalls Murch. “There was a lot riding on it. We announced that and the fans went a bit bonkers. We felt if we messed around with the ruleset at all, then it might have been quite a negative reaction.

“We should just do what we want to do, obviously, but in the heat of the moment you get a little bit clouded sometimes.”

That left very few holes in the design for Rodeo’s own ideas to breathe. With Deathwatch, by contrast, Games Workshop were prepared to ringfence a sector of space for the studio to build in or blow up as they saw fit.

“If we’re already using something like a license, then there’s obviously no wiggle room there,” explains Murch. “Space Marines look a certain way, Tyranids look a certain way – there’s no artistic interpretation of that. So really if you want to be creative on a project, making up the ruleset and the systems and the metagame that goes around it is where that chunk of work is.” 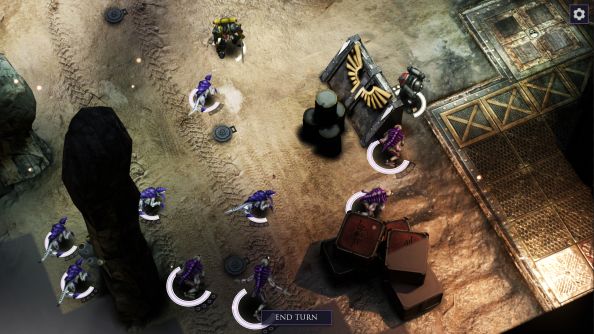 Rodeo have always blocked out their games with pen and paper first. They conceived the rules for Deathwatch that way, designating a developer as Game Master, and spent their afternoons playing with the design.

Over time, Deathwatch lost a cover system, gained grids – and Rodeo found that they were drawing less on the dice-driven ethos of Warhammer Quest and more on the turn-based squad setup of the Hunters games they’d made for iOS.

Asked what players have to think about when navigating a level, Murch talks about team composition: in the PC version, there’ll be nearly 50 different sorts of Deathwatch marines, pulled from six different chapters.

Load your assault marines up with grenades and chainswords and you can barrel into battle up-close. Or if you’d rather, you can hang back and fire from a huge distance with a gaggle of Devastators. Each mission begins with the question of who you’re going to bring with you – and the plan for finishing it emerges from that choice. 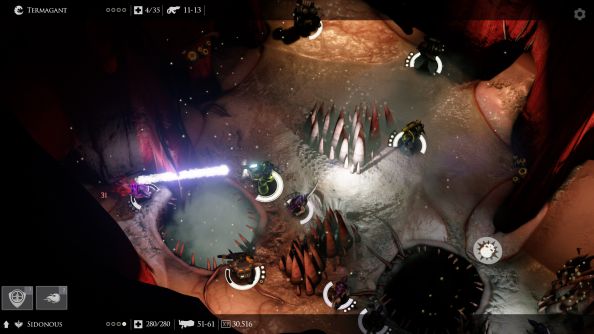 “Yeah, it really did,” laughs Murch. “You have to be careful not to tread on anyone else’s toes, really, when you’re doing this kind of stuff.”

As it turns out, a couple of levels set inside a crashed Imperial ship (“or a Hulk, if you will”) were scrapped due to the similarity. But beyond that, there’s no cause for confusion. Murch rightly points out that Space Hulk is about micromanagement, turning and moving your marines perhaps just a couple of squares each turn. Deathwatch is different: about scrolling over the battlefield to take a holistic view of the chaos, and devising your tactics accordingly.

The mention of a “PC version” raises a question. Here’s the answer: Rodeo develop for mobile platforms first. Warhammer Quest was brought to PC by a third-party while the studio worked on Deathwatch, making this their first proper PC port – but they’re clearly loving the process. 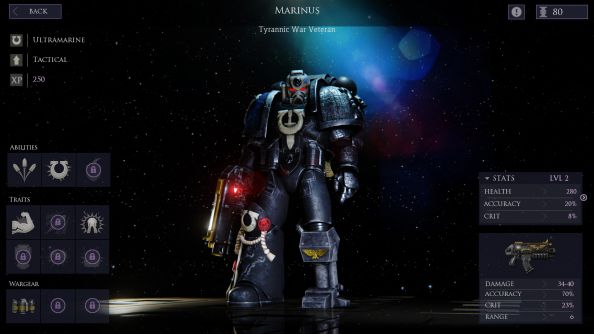 Unreal Engine 4 has accommodated with physically-based rendering for that all-important metallic 40K sheen, and a host of tools for upscaling.

“It’s amazing,” reckons Murch. “You just turn on a bunch of options and suddenly you’ve got ambient occlusion and lens flare and motion blur and all these things you get on really high-end PC titles. Within a few clicks you can make your game look really, really pretty, straight away.”

In truth, Deathwatch has always been a PC game on the quiet. That’s how it was played, throughout development, and the team planned ahead with high-poly character models. One day not long ago, Murch found himself spinning a marine around in the game’s armoury, where players compare stats and equipment.

“Bloody hell,” he thought. “This looks quite nice.”

In this sponsored series, we’re looking at how game developers are taking advantage of Unreal Engine 4 to create a new generation of PC games. With thanks to Epic Games and Rodeo Games.