First of all, did you see what we did with the headline? Usually, see, right, get this, this series is called Making it in Unreal, where ‘it’ refers to a game. Today, though, we’re talking about the latest version of Unreal Engine itself, so we’re calling this one simply: Making Unreal. Haha! Aren’t we droll?

Unreal Engine 5 was unveiled last month in a demo named Lumen in the Land of Nanite. It was so titled because it focused on Unreal 5’s two big new technologies: Lumen, a fully dynamic global lighting system, and Nanite, a geometry system able to create objects at astonishing new levels of detail – as much as “the eye can see”, according to Unreal’s website, and indeed the environments look near-as-dammit photoreal much of the time.

According to the demo, the intricate carvings of a single statue contain 33 million triangles – and a single room contains almost 500 of the exact same statue, with the same detail, for billions of triangles in that one scene.

These technologies underpin Unreal 5’s broader goals: scale, fidelity, interactivity, and, for developers, ease of use. As we stand on the cusp of a new console generation, Lumen in the Land of Nanite was running on an actual PlayStation 5 dev kit, and showed not only astonishing levels of detail and lighting fidelity in each individual scene, but concluded with the words “this doesn’t need to be confined to small rooms – it can stretch all the way to the horizon,” before the player character flies through an equally detailed valley to reach a portal that appears at least a mile away in the distance. As exciting as it was, we were still left with a few questions – many of which were inspired by previous interviews in this series – and got the chance to put them to Epic.

An obvious one was just how such results are achieved and whether or not they come with performance costs. Turns out that, in Nanite’s case at least, the opposite may be true. “Nanite has very different performance characteristics than traditional rendering pipelines and is able to make more efficient use of the hardware to achieve micropolygon detail,” vice president of engineering Nick Penwarden tells us. “In fact, enabling Nanite on existing scenes can be a performance win. I can say that the GPU time spent rendering geometry in our UE5 demo is similar to the geometry rendering budget for Fortnite running at 60fps on consoles.”

Lumen on the other hand “does have a runtime performance cost – it’s not free. We will offer several scalability options that developers can use to tune fidelity and performance to fit their specific needs.”

But what we’ll get in return is mouth-wateringly tantalising. Because Lumen is fully dynamic, with no need to ‘bake’ lighting into a static lightmap, it can react to in-game events and still look jaw-dropping. Alongside Nanite, expect “large-scale destruction and physics simulations, cities that change over time with new buildings erected, and player-built environments,” Penwarden enthuses. Not only are these all now possible, “but they will be more believable than ever.” 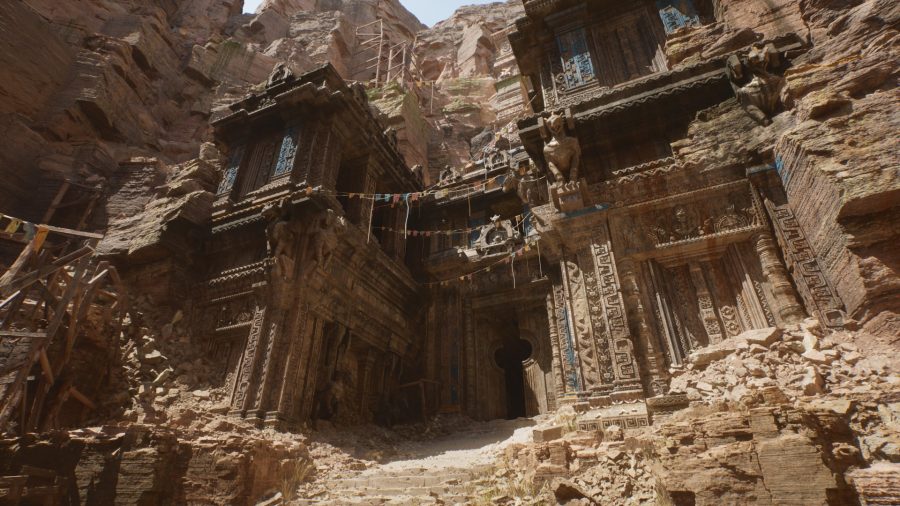 Lumen supports all the development buzzwords – diffuse interreflection, infinite bounces, indirect specular reflections – at scales ranging from kilometres to millimetres, and all dynamic. For developers, it’s as simple as moving a light source in the editor, and lighting will immediately appear as it does when the game runs. This will save buckets of time and energy over waiting for a lightmap to bake, and enable more precise on-the-fly adjustment of lighting for effect.

From a player perspective, it’s hugely exciting. Some of the most beautiful games on the market today are only possible because they’re also inert. Consider how good something like Destiny looks, and yet how static it feels, with no environmental destruction or interaction to speak of, even in its single-player instances. Now imagine those spooky tunnels on Titan if the alien Hive were able to rip open new holes all around you. Achieving the same sense of beauty and atmosphere, but in a reactive, dynamic world that truly responds to its occupants including yourself, is what’s on offer in the next generation of games.

To be clear, Lumen is not the same as ray tracing, long considered the Holy Grail of lighting tech and the next big leap in graphical fidelity, but devs won’t have to choose one or the other. Penwarden emphasises that the current version of Unreal 4 “already has industry-leading support for real-time ray tracing – shadows, reflections, ambient occlusion, and global illumination can all be computed with ray tracing right now in UE4, and we’re committed to continuing to optimise and improve our use of ray tracing in Unreal.” 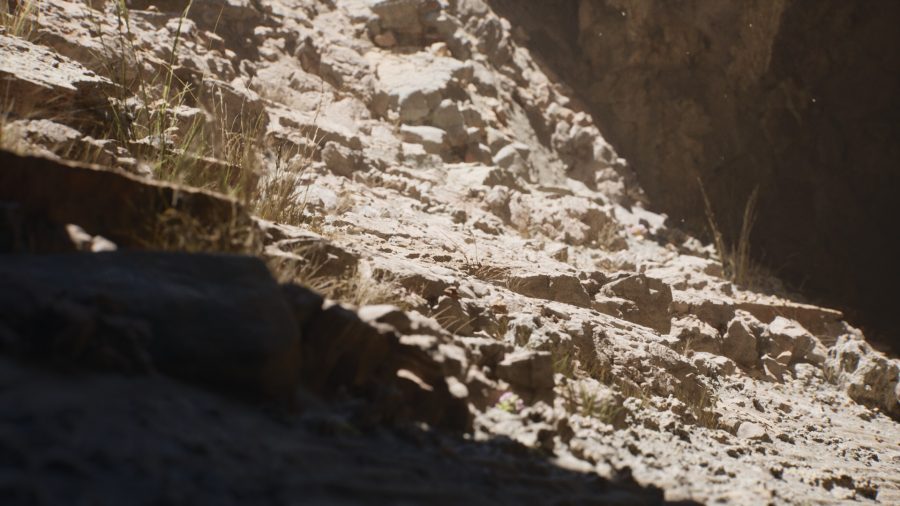 Unreal 5 seems well positioned to be the clear market leader in lighting tech, which means it’s well positioned to be a market leader in game engines, period: even developers that aren’t interested in photorealism want their games to look good, and such a powerful, easy-to-use lighting solution will be hugely tempting. It’s typical of Epic’s ambition for Unreal, which is nothing less than to provide the single most comprehensive game engine on the market – one that can answer any developer’s needs in any genre.

However, while we’ve spoken to technical directors at some of the world’s biggest studios who applaud Epic for “doing a good job” in covering all the bases, one of the many insights that this series has yielded is that developers’ imaginations will probably always outstrip what an off-the-shelf package can deliver. But that doesn’t mean Epic isn’t still pursuing this Quixotic goal for Unreal 5, or listening directly to devs for insight.

“We are building improved open-world editing and streaming tools for UE5 largely because of feedback we were hearing from developers,” Penwarden says. “Full access to the engine source code is crucial here. Every game is going to face unique challenges and benefit from some amount of custom features and tools. With full source code, developers are able to customise and tailor the engine to their specific needs.” 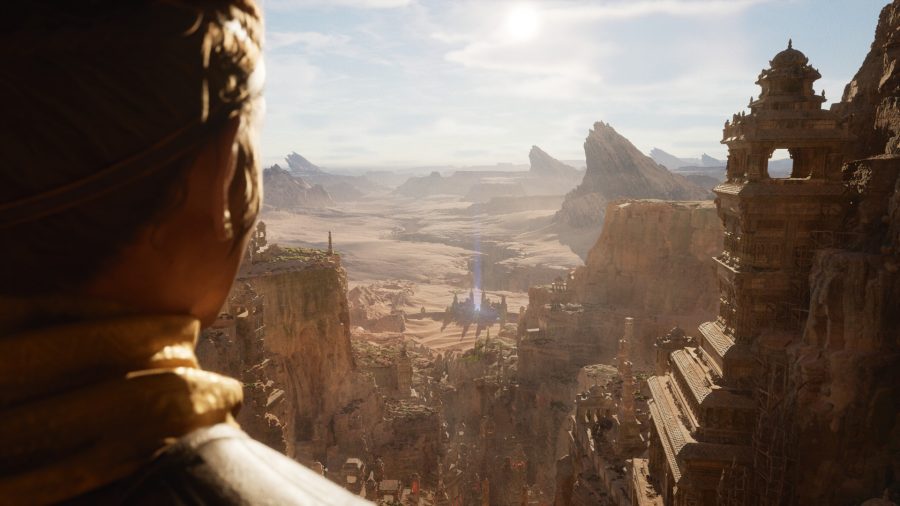 Some developers – those with games in development now, or who run live service games – have wondered how easy it will be to upgrade their existing projects to Unreal 5 and access all this great tech when the time comes. The answer, it seems, is: very.

Upgrading UE4 projects to UE5 will be like taking a larger-than-usual update, and upgrading assets to use Nanite will be simple as checking a box

“UE5 is different from previous generations in that existing UE4 projects will be able to migrate to UE5, and we will not be dropping support for existing platforms,” technical director of graphics Brian Karis says. “Upgrading projects to UE5 will be similar to taking a larger-than-usual UE4 update. Existing UE4 content will load in UE5 and existing gameplay code will work with some changes. Imagine taking a project from 4.21 directly to 4.25 – that is the amount of effort we are targeting for upgrading to UE5. For new features such as Nanite, upgrading assets will be simple. In UE5 there is a check box on the mesh’s properties named ‘Use Nanite.’ Check that and you’re done.”

Combined with the promised ease of the tools themselves, the future is looking bright both for developers in Unreal and for us, their customers. “UE5 will include new tools for building large streaming worlds, updates to our Chaos physics system and Niagara VFX – all targeted at building large, dynamic, and interactive environments for players,” Penwarden says. But it’s interesting to think that Unreal may, in the future, be powering far more of our entertainment than videogames. 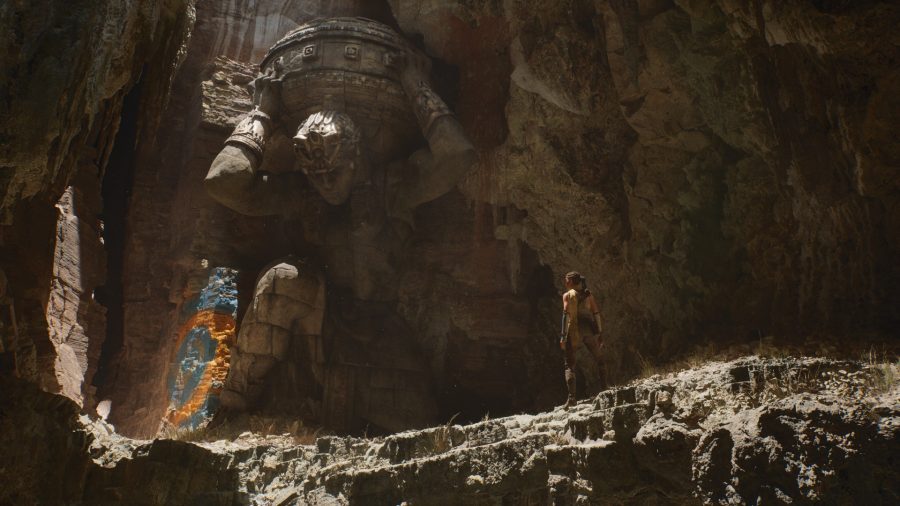 “UE4 has already been used in the production of over 100 film and TV titles, with a recent example being season one of Disney’s The Mandalorian. There’s a lot of interest in the graphical advancements in UE5 across all industries,” Penwarden enthuses.

Peek behind the curtain: Check out these upcoming PC games

In whatever field the technology is deployed, however, it is clear that it represents a profound shift when it comes to realising creative visions. “In terms of technological advancement, Unreal Engine 5 is the biggest generational leap for us to date,” Epic’s vice president of engineering Nick Penwarden says. “UE4 set the standard for graphics fidelity with a physically based rendering pipeline. Now, UE5 is capable of rendering scenes with significantly more geometric detail in real time than previously thought possible. UE5 will advance the state of the art in other important areas as well, from open world streaming and editing tools, to large-scale physics simulations with Chaos and Niagara VFX.”