One of the things that might have struck you about Total War: Warhammer’s newly revealed campaign map, as the camera swept over the orcish badlands and dwarven bridges, was just how dry it was. Most of the Old World’s marching and murder is reserved for its central landmass, with little attention spared for its oceans. Yet with Seas named variously after Claws, Dread, Chaos and Serpents, it’s fair to say there be monsters in Warhammer’s waters too.

Man o’ War: Corsair is an action-adventure about splashing about in the Great Western Ocean, exploring, trading, weaving between rocks and oh-my-goodness-what’s-that, it’s got a mouth like a waste disposal unit and our ship is already inside it.

Whether it’s the sea or space you prefer in your PC sandbox games, we’ve got you covered.

“Games Workshop said it’s one of the things they’re quite excited about – we’ve got our own little part of the Warhammer universe that nobody else has been given,” reveals James Carroll, who co-founded Evil Twin Game with brother Mark. “It was new territory for them, because they made this game with these little two-inch models. What does this world actually look like beyond the ships battling?”

Approached by Games Workshop after oceanic RTS Victory at Sea, it was never on the cards for Evil Twin to adapt the tabletop naval game of Man o’ War directly.

“It was a case of [Games Workshop] looking at Victory at Sea and saying, ‘Yeah, we’d like that basically with orcs,’” Carroll remembers. “But it evolved.”

Mindful of the Warhammer RTS then-concealed at Creative Assembly, Evil Twin set to work instead on something closer to Sid Meier’s Pirates or Elite – a freeform, swashbuckling adventure. With orcs. Their small team in South-West England became excited by the idea of captaining a ship rather than controlling one; of telling your own story as you sailed all the way around the coast of the Old World.

“We like organic games that start to live and breathe,” explains Carroll. 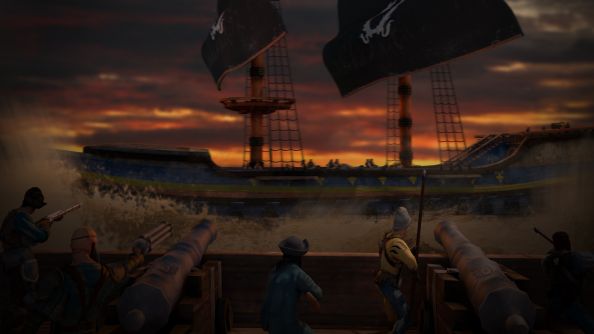 They knew they were onto something once early playtesters started looking through their spyglasses and spotting waste-disposal megalodons surfacing in the distance, attempting to consume poor ships whole.

Even those galleons aren’t like anything you’ve faced in Assassin’s Creed: Black Flag, translated as they are from Games Workshop’s twisted tabletop creations. The orc hulk, for instance, is so poorly pieced together that in the original rules there’s a one in six chance it’ll simply sink.

“Bringing these small, mad ships into the real world is bonkers,” says Carroll. “You’ve got to take that and make it something viable and huge. I was playing yesterday and had this orc hulk come out the fog. It’s got these huge claws at the front that it can fire out and start pulling your ship towards itself. It drops a massive hammer on the top of your deck and just smashes you up.” 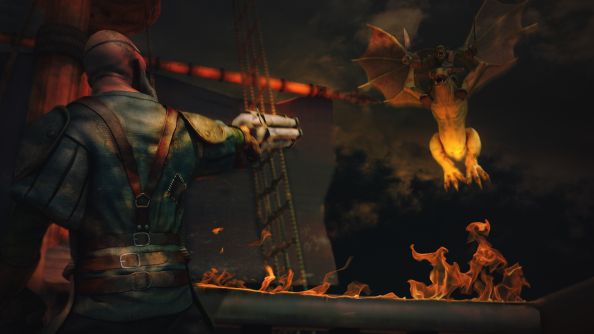 As on the battlefield or the Blood Bowl pitch, half the joy is in discovering the alarming behaviours of the creatures in the stranger corners of the Warhammer world – which runs the gamut from high fantasy to horror to steampunk. Expect to see dark elf vessels towed by gigantic sea dragons, to be strafed by dwarf gyrocopters, and divebombed by orcish war wyverns. Captains can fight back with anti-aircraft hellblaster cannons, and summon lightning clouds courtesy of their on-ship wizard.

There’ll be some surprises for Old World scholars too, since Games Workshop have carved out an early time period for Evil Twin to work within. The age-of-sail Bretonnians, all but disappeared by the time of Total Warhammer or Vermintide, are here a fading but frightening power.

You’ll directly steer your ship – switching to your captain’s perspective for boardings, to stroll around the deck and make holes in your enemies while your crew takes the wheel. Keeping track of spellcasters and airborne units via an order system sounds complicated, but Carroll says they’ll each retain a certain autonomy, as well as a personality – a tendency towards aggression, cowardice, unpredictability or, in the case of some dwarves, an implacable grudge against orcs that can lead them to chase after the hulk in the distance rather than the galleon in front of you. 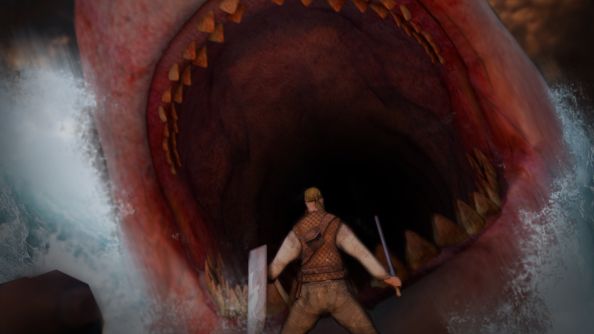 “You get what you pay for,” advises Carroll. “You’ve got a small team on your ship so you’ve got to get your captain in there, get stuck in and try and take out as many as possible.”

The trading is the whirlpool that’ll suck some players in – the ones coming into port to upgrade their broadside cannons, install reinforced hulls and hire on sharpshooters. But surely it’s the strange monsters the maps warn of that’ll lure new adventurers to Steam Early Access.

“You get swept away in just exploring the coast. Every so often something comes out at you or something hits the side of your ship and can make you jump,” says Carroll. “I personally rigged the Megalodon and put it in the game, and I still forget it’s there.”