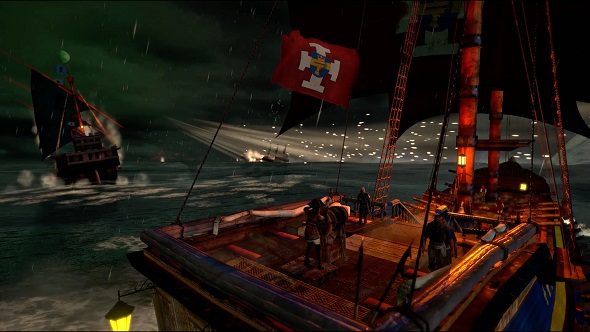 After a year in the early access drydock, the Warhammer naval combat game Man o’ War: Corsair is hitting the open ocean on April 19. Casting players as a ship captain sailing around the Bretonnian coast, sailors can choose to live the life as a humble trader, or become the scourge of the seas.

For those on a Warhammer kick, here’s everything we know about Total War: Warhammer II.

Players can choose to be a Bretonnian, Imperial or Chaos ship captain, flying their flag for one of three factions during their time on the water. The human campaigns are an open sandbox, allowing players to do what they want as a sailor, while the Chaos campaign has you burning and pillaging any settlement you come across as you sail up the coast.

If you want to craft your own naval battles or scenarios, there is a Custom Battle mode, where you can fight any of the races with 34 different ship types. While the captains may be limited to only three factions, players can add dwarfs, high elves, dark elves and other pirates to their crew, with skaven, ork and Chaos vessels attempting to scuttle your ship.

There are also giant sea monsters like humongous sharks and krakens to battle as you sail from port to port. You can even hire wizards and other magical beasts to protect your ship, making for battles while look like something from a Ray Harryhausen film. You’ll also have to combat the weather, as rough seas, raging storms and dense fog could sink your ship if you’re not careful.

Unfortunately, the seas aren’t the only thing that choppy in Man o’ War: Corsair, with even the launch trailer running at a slow frame rate. The graphics aren’t pushing the envelope, with character models and animations looking very basic compared to other naval combat games. It shouldn’t putting dedicated privateers off, but just be aware that the presentation can be as rough as the ocean at points.