Kid’s crap. Knock-off Minions. Mascots of a bargain bin Wii franchise. That’s probably how you think of the Rabbids, the diminutive stars of the games you black out for during the Ubisoft E3 conference.

Since this year’s E3, though, the publicly accepted position on the subject has become dislodged. It hangs uncomfortably in the ether, like one of the two teeth in a Rabbid’s maw. Because somehow, these googly-eyed enigmas have precipitated the next development in the XCOM-alike genre.

Mario + Rabbids Kingdom Battle might not be coming to Steam but nearly every element of this isometric tactics game takes its cues from the PC. There’s Princess Peach, waiting in overwatch. And the primary-coloured plumber himself, crouched behind cover, biding time until the opportunity for a clear shot presents itself. As XCOM’s Jake Solomon asked: “What world am I in right now?”

It’s not the sort of game you can ignore. So how do you reconcile those unkind preconceptions about the Rabbids with this, the strangest timeline? 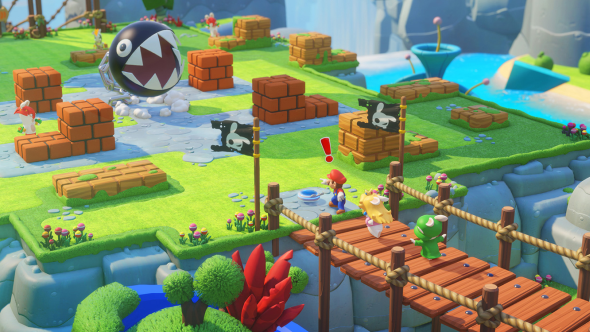 There is a way. Let me talk you through the mental backflips necessary to begin appreciating les lapins crétins, as they’re known in France – not just as a slapstick creation but as a subversive force in popular culture. Join me in this strange mindspace.

If you’re looking for a point of difference from the Minions, watch what the Rabbids do when nothing’s going on. In repose, the Minion slumps endearingly – suddenly resembling a human child in Marks & Spencers. But the Rabbid is entirely alien: stock still, thousand-yard-stare, unwilling or unable to relate.

It’s not always been “bwaaah” – sometimes the ‘w’ seems to be silent, and it’s not so much the word as the delivery that’s important: guttural, primal, silly. That’s what the Rabbids are.

Michel Ancel drew the first one on a train from Montpellier to Paris. Intended as villains for Rayman 4, they eventually swallowed the project whole, leaving Ancel behind and birthing Rayman Raving Rabbids. It’s this habit of taking over – subverting an established order they don’t respect or understand – that I’ve come to find endearing in the lapins.

It’s a habit that came to fruition when the Rabbids next returned to Ancel’s studio, Ubisoft Montpellier, in the fittingly-titled Rabbids Go Home. This was no party game but a racer-cum-platformer, in which the player controlled two rabbids and a shopping trolley as a single organism, rather like the rat king of horrific European folklore.

The premise found the Rabbids building a tower to the moon – figuring that, since you can almost touch the moon by sticking out one white paw and squinting a bit, getting there is only a matter of collecting enough stuff and piling it high. The stuff came from human civilisation: traffic cones, satellite dishes, live cows, and the shirts shocked off the backs of civilians with a point-black “bwaah.”

It’s by bringing Rabbids into contact with humankind that Ubi finally managed to define them. The people in Go Home are an amalgam of our most boring traits: sensible, polite, devoted to work, slaves to routine. Drawn in opposition, the Rabbids are the id to their super-ego: pure instinct and impulse, separated out from the part of the psyche that says ‘no’. 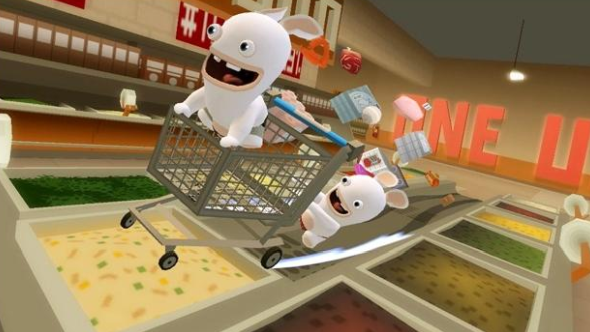 “The Rabbids have no memory, so they’re spontaneous,” creative director Jacques Exertier tells IGN. “They’re stupid yet enthusiastic, irresponsible yet joyful, overbearing yet without taboo. They represent emotions pushed to the extreme.”

While the consumerist human world of Go Home is soundtracked by doo-wop and dadrock, the Rabbids are accompanied by the music of Moldovan gypsy brass band Fanfare Vagabontu – which they play in-game as they surf the sewers on the back of a manky mattress.

“We created the humans as their exact opposites,” Exertier says. “The humans in Rabbids Go Home mull over all their decisions, their emotions in check. Their organs have atrophied. They have nearly forgotten that they have a body or a heart, and can barely handle those.”

The Rabbids, then, exist to make a mockery of our neuroses and inhibitions. They are incorrigible enablers, which is why they were first created as villains. But it’s that same quality that allows them to run down the usual boundaries of game development in an overloaded shopping trolley. 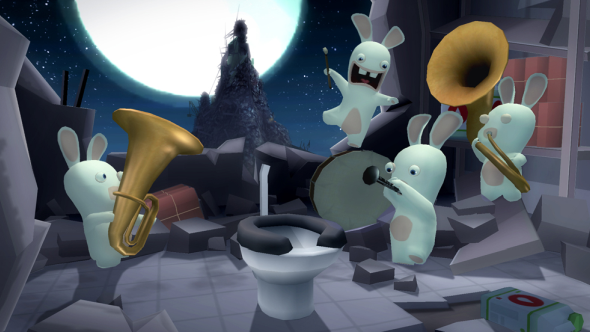 Who else in the Ubisoft canon could feasibly have crossed over into the Mushroom Kingdom? What other character could, under the watchful gaze of Shigeru Miyamoto, get away with Selfie Peach? The Rabbids don’t ask for permission. They simply do, and then forget to apologise later.

They certainly wouldn’t have any time for this argument. Exertier knows them best and says, “I can assure you that the Rabbids couldn’t care less that they are actors in an allegory. In fact, they would never have responded so rationally.”

Perhaps you can consider this a new entry in XCOM’s UFOpaedia: a way to know your enemy. Just as Zelda has changed the open-world in ways that will surely come back around to the PC eventually, the Rabbids are taking one of our genres and running with it. Understanding them is key to working out what shape turn-based tactics will be in once they give it back.