Fighting games have, for as far back as I can remember, functioned with the ethos ‘What you see is what you get, and if you don’t like it, you can piss off’. Yes, there have been accessibility gimmicks in recent years that have allowed even new players to pull off spectacular moves with some simple button taps via systems like Mortal Kombat’s gratuitous x-ray attacks or Street Fighter’s Ultra combos. Nevertheless, they largely remain out of reach to people just wanting to ‘have a go’, offering little pick-up-and-play satisfaction beyond the occasional spectacular move triggered by the random sequence of mashed buttons.

Will MvC Infinite make it into the best PC games of 2017? We can only hope.

With that in mind, my eyes at least half-rolled when at a press event for Marvel vs Capcom Infinite we were told that Capcom’s latest crossover fighter would be more “digestible” for new players. Clearly, they were aware that the word ‘accessible’ has been overused by the marketing machinery behind fighting games over the years, and is also associated with such unsexy things as smartphone UIs and wheelchair ramps. But after spending a couple of hours unleashing semi-intentional tag-team combos, special moves and Infinity Storms, I’ll give it to Capcom; this is the first fighting game since the wonderfully self-aware DiveKick that’s actually easy to pick up and have some fun with.

Infinite does some drastic trimming on its predecessors. Team sizes have been reduced from three to two, meaning there’s no longer a third character used almost exclusively in a supporting role. The number of standard attack buttons has been reduced to four, so you could technically play this on a SNES gamepad if you so wished, while basic four to eight-hit combos can be performed by even the most meaty-fingered of players. On the tag-team front, all you have to think about is the ‘tag’ button, off the back of which you can flow into anything from a simple swap-out, to a devastating death juggle whereby you deftly swap your two heroes in and out to keep your opponent bouncing around helplessly in the air. 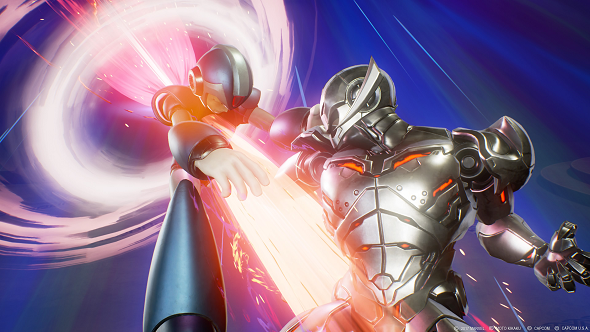 In my first battle, I paired up my personal favourite, Iron Man, with the amusingly mundane Chris Redfield of Resident Evil fame. Grateful for the bottomed-out AI difficulty, I was easily utilising the universal four-hit combo for launching the opponent into the air to set myself up for some aerial juggling. It wasn’t long before I was hurling my ragdoll opponents into the air as Iron Man, leaping up and blasting them with my laser beam, before summoning a rocket launcher for my super move, during which I’d call in Redfield to continue the combo onslaught. Just about any combo of random punches flows into one another balletically, without you needing to worry about doing it super-fast, or thinking about whether a hard punch followed immediately by two low kicks (or something) will break your momentum. Infinite wants to keep you going.

Each character has a small number of moves outside of the universal ones, encouraging you to try them all out instead of over-investing into one – a good design choice, considering this is shaping up to be one of the most entertaining fighting game rosters in history. These limited unique moves are where the characters really pick up their identity. Iron Man’s moves include a long-range laser blast from his noggin, flying around and slashing his enemy with a beam of light, while Redfield drops mines, and has a highly spammable move where he goes prone and shoots from his pistol for as long as he likes/until someone figures out to jump down onto his frail prone back. One of Hulk’s specials, whereby he slams a flaming boulder into the ground, makes this particularly gratifying. All the moves you’d expect from Street Fighter favourites like Chun-Li and Ryu are accounted for, although such is the speed of the combat that you won’t have much time to admire the fancy new visuals of Ryu’s Hadouken before you’re embroiled in a whirlwind of flying fists, swapping characters, and backgrounds that are ever-shifting because of Super Moves and the brand new Infinity Stones. 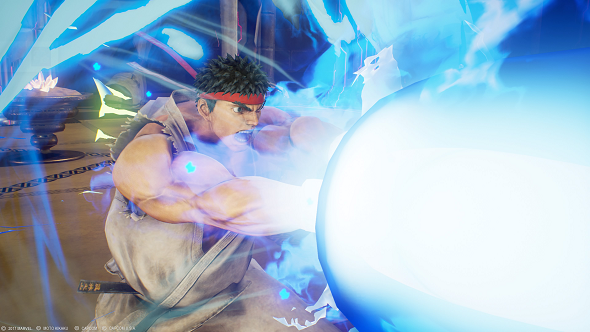 So let’s talk about those Super Stones and Mega Moves. Most super moves entail a quick roll on the d-pad or analog stick followed by two buttons pressed simultaneously. The Infinity Stones, meanwhile, hail from the Marvel universe, and harness the forces of Time, Power, Space, Mind, Soul and Reality, which makes them sound like a trinket you’d buy from a spaced-out, du-rag-donning ex-hippie in San Francisco. But they’re better than that. You pick one for your team before each fight, and can then activate Infinity Surge at any time by tapping a shoulder button, which will do a blink-like dodge if you have a Space Stones, give you a quick burst of damage with the power Stone, or other mini-mechanics depending on which one you use. Charge up your stone enough (usually by getting the shit beaten out of you), and pressing both shoulder buttons simultaneously will turn the background into a Space Odyssey-style swirling vortex as you gain super-speed, trap your opponent in a restrictive cage of energy, or hit with the force of a meteor slamming into the moon. The Infinity Stones effectively replace the deposed third player from MvC 3, offering you a new element that’s easy to use, but will take some time to fully understanding which best suits your play style and characters will take some time.

Infinite is a fighting game offering a ton of spectacle for relatively little effort, and while I can’t speak for hardcore players who may see this mechanical streamlining as something of a Baby Mode, I had a blast with it, basking in the power fantasy of controlling these iconic heroes rather than constantly switching to my command list to memorise moves. 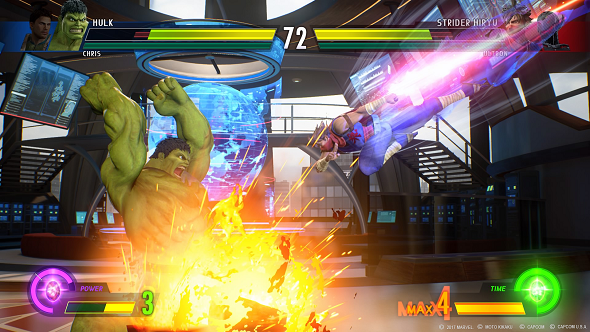 If the accessible/penetrable mechanics of Infinite hint at aligning the series with the Marvel movie machine by broadening the series’ appeal, then that is all but confirmed in the overhauled presentation, which veers away from the comic-inspired looks of its predecessors. The glossy, more realistic character models reflect the shift in mass audience perception of the Marvel universe in the six years since the last game, as our understanding of these characters is now shaped far more by Hollywood than by comic strips. So everyone looks a bit grittier now. Iron Man’s armour is speckled with dirt and grime (and he looks and sounds suspiciously like one Robert Downey Jr.), while Hulk looks like he’s desperately in need of a wash, his trademark torn jeans now flaying as he hops, smashes and boulder-dives his way around the screen.

Naturally, the Capcom heroes are forced to follow suit with the money-spinning Marvel lot, giving up some of their anime roots in favour of what could be described as a more ‘western’ aesthetic. Chun-Li’s thighs, for example, have taken on more human proportions, and there’s the slightest hint of bags under her eyes, marking her out as the veteran warrior she is rather than the cutesy, big-eyed teenager of yore. Likewise, Ryu looks more rugged, while the uncomfortably horny Morrigan now has freckles on her face, humanising her more than ever. Only Mega Man seems to have escaped this maturation – his squeaky-clean armour and perfect plain skin looking fittingly synthetic next to his colleagues-in-combat. 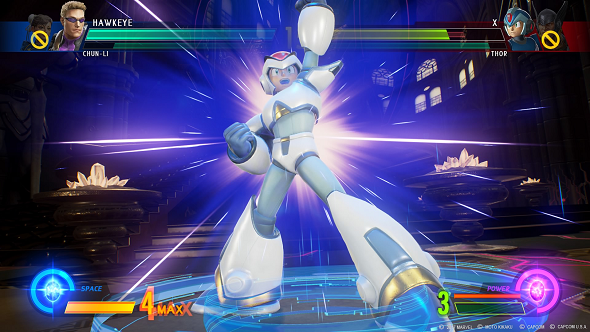 When Capcom told us that, for the first time in the series, there’d be a tangible story, I idly speculated that it would involve some interdimensional space-time rift puppeteered by a marketable Marvel villain. I was close. The Capcom and Marvel universes have been pulled together into an apocalyptic dimension ruled by Ultron and Sigma (from Mega Man), who are trying to consume the power from both their worlds and turn the heroes into robotnick slaves. Ergo, all aggrieved parties from both universes arrange to fight each other in tag-team duels instead of just bum-rushing the men who got them in this mess. It doesn’t make sense, but hey, it’s a fighting game, it’s a franchise crossover, it was never going to push the boundaries of video-game narrative. Besides, the sight of Rocket Raccoon asking Mega Man how many people he’d killed with his blaster made me smile, and that’s the kind of silliness this whole thing is really about.

Capcom are running with an interesting concept for the stages, as there will be several stages where we see the Marvel and Capcom universes colliding. I played on one called Xgard, a fusion of the first world from Mega Man X and Asgard from Thor, with an industrial skyline on the left, and the campy golden palaces of Asgard on the right. In the, erm, thor-ground, ruined Asgardian statues flank a highway with a Megaman van toppled on its side. 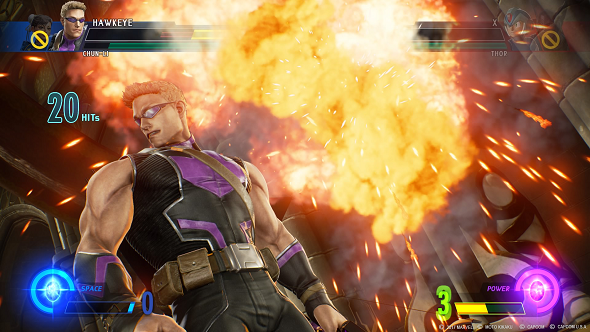 While I love the idea of smashing stages from the two worlds together, I was disappointed by the lack of activity in the background of the ones I played, which felt sparse and distant compared to the more reactive, more intimate surrounds of past Capcom fighters. The other two stages were the generic Briefing Room (the training stage, I assume) and Ultron’s throne room, which once again felt oddly barren. Perhaps this all fits with the apocalyptic theme of Infinite, but I don’t feel it, especially as backgrounds are such a historically crucial part of Street Fighter iconography. You have five months to fill ‘em up, Capcom…

As someone who doesn’t play many fighting games, I was pleasantly surprised at how welcoming MvC Infinite was, appreciating its forgiveness when my amateur fingers slipped off of buttons or didn’t hit combos with perfect rhythm. Instead of punishing me when I felt like my brain wasn’t keeping up with my fingers (or the other way round, maybe), it pushed me on, imbuing even scrappy battles among amateurs with a sense of fluidity and visual splendour.

You get a sense that the simplification of the control scheme is aimed at reeling in the ever-growing legions of Marvel fans that Hollywood keeps spawning, creating a more accessible/digestible/fathomable/edible alternative to the mainline series. I can already hear the alarm bells ringing among more hardcore players, but really it’ll be up to them to judge whether this streamlined system is still rewarding at the higher and pro levels. At the casual level, MvC Infinite could offer an entry or re-entry point for players who’ve left the fighting genre behind.