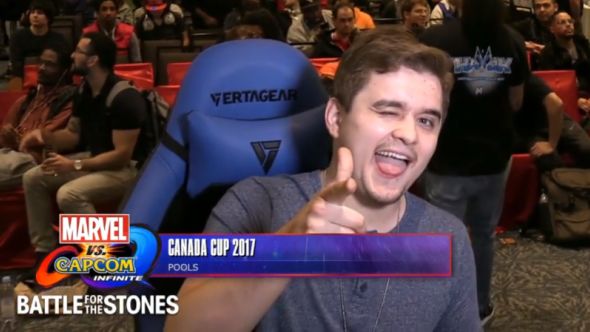 Two Marvel vs Capcom: Infinite players have been handed lifetime bans from Canada Cup events after it was revealed that one of them gave up their spot in the tournament, allowing their friend a second chance at success.

Marvel vs. Capcom Infinite is great for comic fans who suck at fighting games.

Jose Aldape, who competes in-game as ‘PC Marvel God’, had previously found success in Ultimate Marvel vs. Capcom 3, but found himself struggling at this weekend’s Canada Cup, which was hosting a qualifying tournament for Infinite’s Battle for the Stones championship.

Aldape only made it through three matches, before a disappointing 1-2 record in his pool saw him unable to progress further. That is, until he showed up again later, competing under a different name in a different pool. By the time he was discovered, most of his pool had been played, but tournament organisers were forced to replay the pool without Aldape, which meant that some players who had already progressed found themselves removed from the competition after losing to players they had previously beaten.

It eventually transpired that another player, Lina Crawford, had been due to compete at the event but had had to drop out shortly before. She approached Aldape to convince him to take her spot, essentially giving him two attempts at tournament success. Aldape issued a public statement saying “As I was playing casuals, Lina approached me and asked if I could take her spot in the tournament, because her stick wasn’t working and she would drop out otherwise,” Aldape said. “I was cool with it for fun, so I reluctantly agreed after she asked me several times. I originally thought I would lose quickly and thought of it as a big joke. Had I known that it would cause this much trouble for so many people, I would have refused.”

In a later statement, Canada Cup organisers said they would be “instituting lifetime event bans for both registrants, and sincere apologies for the disruption their actions have caused.” Capcom are yet to comment on this issue.

{"schema":{"page":{"content":{"headline":"Marvel vs Capcom: Infinite player given a lifetime ban after entering tournament twice","type":"news","category":"marvel-vs-capcom-infinite"},"user":{"loginstatus":false},"game":{"publisher":"Capcom","genre":"esports","title":"Marvel Vs. Capcom: Infinite","genres":["esports"]}}}}