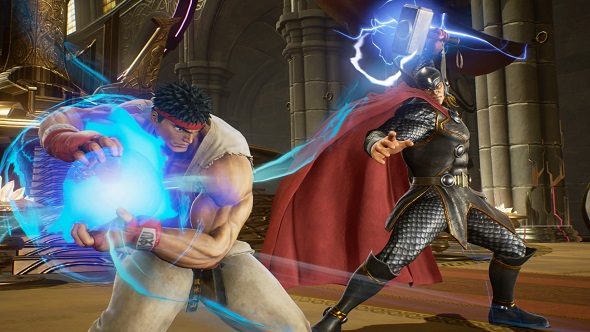 After revealing some new characters, the Story Mode and its release date earlier this week, Capcom have finally released some more gameplay footage of Marvel vs. Capcom: Infinite. Along with showing off new characters like Ultron, this trailer has characters using the Infinity Stones to set up some deadly combos.

In the long wait for Marvel vs. Capcom: Infinite, why not try out these other top multiplayer PC games?

While most of the characters and their movesets will be familiar to Marvel players, the main draw of this trailer is seeing how Capcom have made the switch from 3v3 to 2v2. Similar to Street Fighter x Tekken, players can snap in their other character during a combo, allowing them to set up for a launcher or a hyper combo. Out of the returning characters shown in this trailer, Hawkeye has received the most notable changes, now wearing the outfit seen in the Avengers movies and gaining a new level 3 hyper combo. Besides that, most of the returning characters have the exact same moveset as seen in Marvel vs. Capcom 3.

Ultron is definitely the most interesting of these revealed characters, having the ability to summon robotic clones to extend his combos. With a divekick, extensive aerial combos, laser based hyper combos and a full range beam attack, this metallic monstrosity may be Marvel vs. Capcom: Infinite’s replacement for Doctor Doom.

The Space and Power Stone also feature in the trailer, with both being used to extend combos. The Space Stone works like Seth’s Tanden Engine in Street Fighter IV, sucking opponents in if they move too far away, while the Power Stone causes a wallbounce if used mid-combo. The Infinity Stones can also unleash special match-changing effects which can swing the momentum in your favour, similar to Marvel 3’s X-Factor. This trailer shows off the Space Stone’s effect, which locks your opponent into a cube from which they can’t escape. With their movement limited, players can set up devastating mix-ups or jump-ins that can wipe out an opponent’s lifebar.

Marvel vs. Capcom: Infinite is now available for pre-order on Steam for $59.99/£39.99, with pre-orders of the standard edition giving players access to the Warrior Thor and Evil Ryu Premium costumes.