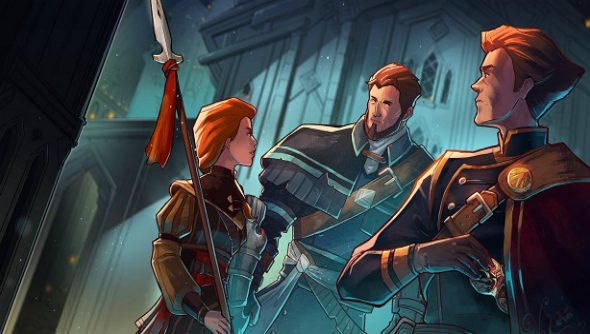 Masquerada looks like it could be pretty cool. It’s an isometric tactical RPG with a Disney-like art style that evokes memories of The Banner Saga. Instead of constantly drawing your eye away from that lovely art to read a novel’s worth of text, Masquerade’s focus is on audible dialogue between its characters, even during battle.

With that in mind, for Masquerade casting the right actors seems as important as nailing the combat, but the team has managed to bag some great voice actors already. Among the cast is Jennifer Hale (Commander Shepard, Mass Effect), Matthew Mercer (Chrom, Fire Emblem: Awakening) and Dave Fennoy (Lee, The Walking Dead).

For the Singapore-based studio behind the game, Witching Hour Studios, this will be their first foray into PC development, with previous games released on mobile only.

“Back when we started, we promised we wouldn’t pollute the gaming market with nonsense,” says the team to RPS. “Well, the mobile market polluted itself, and we’ve decided to take our wares where thoughtful games continue to be cherished – back to PC and consoles.”

The game will be playable in its alpha form at this year’s PAX Prime. Other than that, Masquerada has the tentative release window of spring 2016.

Here’s a gameplay trailer to keep you until then: