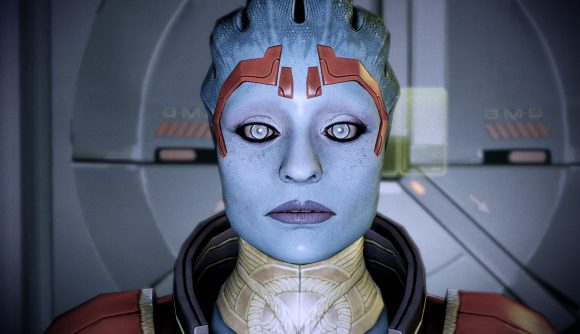 I don’t always write news about random facts I learned on Twitter, but sometimes those facts are too good not to share as part of my job. Also, now that I’ve learned that Billie Eilish’s mom played a major character in Mass Effect, I’m not going to be able to focus on anything else until I talk about it.

Eilish’s mom is actor Maggie Baird, who portrayed the Asari Justicar Samara in Mass Effect 2 and 3. That’s her most recognisable game role, though she also voiced minor characters in everything from Everquest 2 to the early Saints Row games and Lightning Returns: Final Fantasy XIII. Her career outside games is extensive, too, but that’s the kind of thing Wikipedia is for.

Funnily enough, Samara’s loyalty mission in Mass Effect 2 has you tracking down her daughter, Morinth, who could certainly be described as a bad guy. You know, a bad type. Definitely a might-seduce-your-dad type. Morinth can join your party if things go bad with Samara, and now you’re never going to stop me from believing alien Billie Eilish is part of my Renegade Mass Effect playthroughs.

Look, I really like Billie Eilish and I'm not afraid to admit it. But will I admit that I might like her *more* now that I found out her mom was the voice of Samara the justicar in Mass Effect 2 and 3? Maybe…

It’s been a quiet few years for fans of BioWare’s sci-fi RPG games, but the studio has reportedly begun “very early development” on Mass Effect 5. Expect a long, long wait before we hear more on that either way.