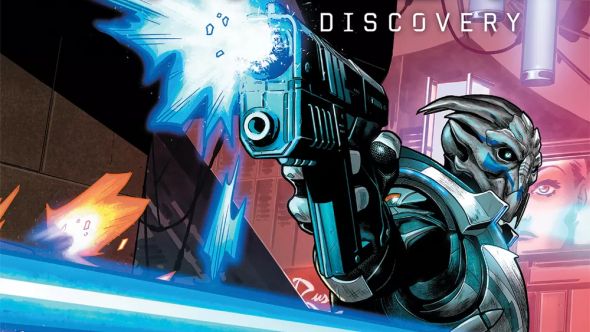 BioWare’s partnership with Dark Horse comics continues, with the announcement of the first graphic novel series based on the forthcoming Mass Effect: Andromeda.

To learn more about the personalities you’ll be fighting alongside, check out our Mass Effect: Andromeda character guide.

Entitled Mass Effect: Discovery, the series follows a Turian soldier named Tiran Kandros. That’s already a bit interesting because he shares a surname with an existing character – Nyreen Kandros was the leader of the Talons mercenary group, and appeared in Mass Effect 3’s Omega DLC. (She was also the first ever female Turian to appear in the series.) Whether Nyreen and Tiran’s shared name indicates a significant family connection, or if it’ll have any bearing on the plot of the comic or the game, is predictably unknown.

The official plot summary is as follows:

“A young Turian military recruit goes undercover in order to infiltrate the mysterious Andromeda Initiative – and ultimately retrieve a scientist who’s made a potentially devastating discovery. Tying in to the highly anticipated release of Mass Effect: Andromeda, writer Jeremy Barlow and artist Gabriel Guzman team up to create the next exciting chapter of the Mass Effect comics series!”

Many thanks to Polygon.

The first five issues of Mass Effect: Discovery will hit shelves on April 12 this year. The firstAndromeda Initiative novel, Nexus Uprising, is due out much sooner on March 28, just days after the game’s release. It promises to unfold more of what happens to the different species’ arks as the enter the Andromeda galaxy – as we’ve seen in the trailers, it doesn’t go smooth for the humans.