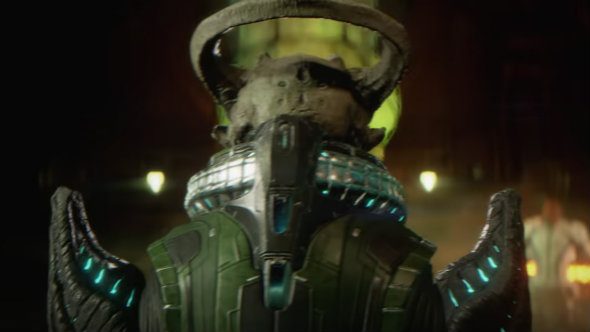 BioWare are opening up on the Kett, a race of angry, armoured aliens who seemingly don’t want us lot turning up in the Helios Cluster after our centuries-long cryogenic slumber.

Prepare to take on these new aliens in our list of the best space games.

The Kett are apparently unlike anything we’ve seen in Mass Effect before. Though humanoid and clothed, this carapace-clad species of alien will have a completely different way of thinking.

In a new Game Informer video, Mass Effect: Andromeda’s art director talks us through the design process involved in bringing them to life, from starting with a strong silhouette, to making sure their design fits with gameplay – contrasting the carapace and flesh makes it easier for players to line up shots on their soft spots, for example.

The video in the link above doesn’t touch upon their backstory and plot, but it gives us a good insight into their aesthetic, with their weapons and structures far more organic looking than we’re used to seeing in the clean line-obsessed Mass Effect universe. Well, presumably they mean other than the Collectors, who were also rocking a carapace and some funky, organic weaponry.

You can see a glimpse of them in the cinematic trailer below: