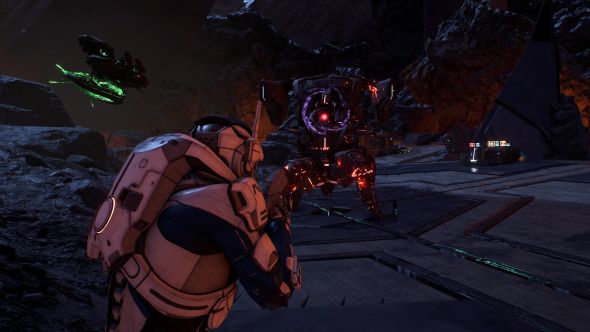 Thirsty for more knowedge? Here’s everything we know about Mass Effect: Andromeda so far.

The news comes via Frazier’s twitter feed, where he responds to a fan’s query about this process:

@akgeesaman @argeesaman Yup! And it's possible to earn sp rewards in the process. 🙂 (mp doesn't impact sp's story like in me3, though)

This doesn’t contradict what we’ve been told before – that Andromeda’s multiplayer won’t affect or spoil the campaign – but it’s the first we’ve heard that single-player rewards can be earned in multiplayer.

Update January 12, 2017:Thanks to some tweeting by BioWare staff, we know a little more about how Mass Effect: Andromeda’s multiplayer and single-player will interact.

We heard earlier this week that a system called ‘Strike Teams’ will link Andromeda’s single-player and multiplayer modes in a narrative context, and will enable you to switch between the two without quitting out to the main menu. However, Frazier and Melo say this won’t be the only way to play either mode: “if you only wanted to play MP (or only SP for that matter), you can without any gating from the ‘other’ mode”, says Melo. Strike Teams are “not a requirement”, says Frazier.

Melo also made clear that despite Strike Teams making sense of multiplayer within the story of the campaign, multiplayer maps won’t be “gated” by your progress in the story – all maps will be available from the beginning. This also means multiplayer won’t spoil the single-player story.

@GentleYahg @BSNforums correct. you should be able to jump straight into mp if you wanted and not get sp spoiled

Original story January 10th, 2017:Mass Effect: Andromeda’s multiplayer mode will be closely integrated with its single-player story, and you’ll be able to switch between the two modes without quitting to a menu as in Mass Effect 3.

Speaking with Kotaku, BioWare producer Mike Gamble said something called the “Strike Team system” will allow you “to go between single-player and multiplayer within the game… And it’s packaged around a meta-story of what’s going on in Helios.” That would be the Helios cluster, the part of the Andromeda galaxy where your mission begins.

Unlike in Mass Effect 3, where you had to play multiplayer to improve your galactic readiness if you wanted the best ending (until the DLC added a bunch more war assets, at least), Andromeda’s ‘meta-story’ can be resolved without playing multiplayer at all.

Gamble says “it’s pretty seamless” to switch between the single-player and multiplayer; you won’t have to quit to the main menu. “I can tell you that there’s a loading screen – it’s not entirely seamless – but it won’t require you to stop your game and restart in a different mode. Because narratively it’s all connected, it makes a lot of sense.”

Your main mission in Andromeda is to find humanity a new home in a new galaxy, and we know that exploring planets and setting up outposts will be part of the gameplay. We know the multiplayer will be a refinement of Mass Effect 3’s wave defence mode, and narratively speaking, it would tie together nicely for Andromeda’s multiplayer to be based on defending new outposts against waves of hostile local aliens.

We’re expecting news of Andromeda’s multiplayer beta– which sadly is exclusive to consoles, but will nonetheless be revealing when it happens – later this month. Andromeda itself is set for release on March 21 in America and March 23 in Europe.