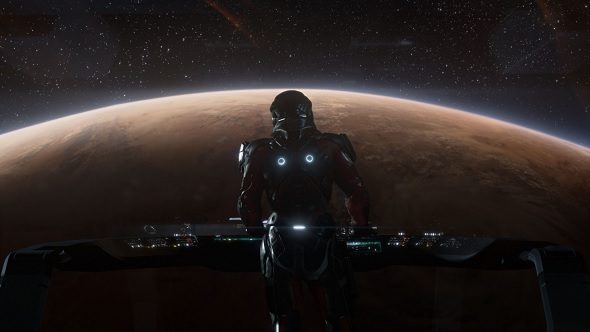 Teased yesterday (see below), a new cinematic trailer for Mass Effect: Andromeda has been uploaded to EA’s channel.

Keep an eye on our upcoming PC games list to see what the future holds.

After months of no information and then months more of little teases, Andromeda details come thick and fast in this new trailer. We guessed the human ark was in trouble from the big explosion in earlier videos, but now we know it’s adrift and in desperate need of safe harbour.

The trailer opens with a look at ‘New Earth’, likely the first habitable planet you’ll discover and explore after the incident. But you’re hardly welcomed; the dangerous Kett Archon has other plans.

We also get our first in-engine look at two human characters we know about but haven’t seen much of yet. EA confirm that these are your starting squadmates, crisis responder Liam Kosta and ops specialist Cora Harper. It’s pretty clear – from all the tongues – that Cora is a romance option for a male Ryder, at least.

For everything else we know about your companions to the new galaxy, check out our Mass Effect: Andromeda character guide.

Original story January 25, 2017:BioWare and EA are continuing the long tease for Mass Effect: Andromeda, with another trailer promised to release tomorrow.

What the trailer contains is anyone’s guess, but it looks like we’ll be getting our first look at humanity’s new home.

“A new galaxy awaits, but no one said it would welcome us,” says the tweet. “Tomorrow, you’ll get your next look at Mass Effect: Andromeda.”

There’s also a short teaser video in the tweet and you can watch that below:

A new galaxy awaits, but no one said it would welcome us. Tomorrow, you'll get your next look at Mass Effect: Andromeda. pic.twitter.com/X7ZlJXyIAL

We’ll update when the trailer lands.