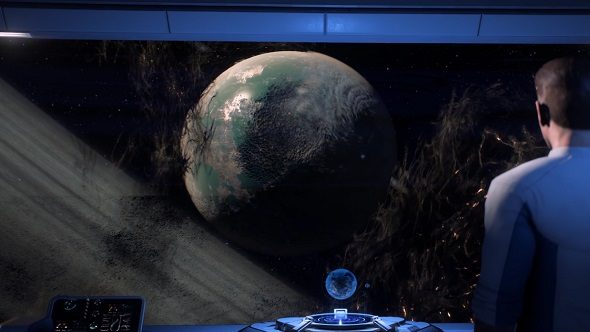 With that launch date creeping ever closer, BioWare have teamed up with IGN to show off the first 13 minutes of Mass Effect: Andromeda. Don’t worry, this footage is relatively spoiler free, it just shows your chosen Ryder waking up from their 600 year long nap and getting briefed about the mission ahead.

For those who want a full story rundown of Mass Effect: Andromeda, here is our story guide.

Following character creation (which is not shown in this footage), your chosen Ryder emerges from cryosleep and is taken for their routine physical with the Tempest’s doctor Lexi T’Perro. This gives players their first taste of the conversation system, with Ryder chatting with both T’Perro and the Hyperion’s’ on-board AI SAM.

Things can’t stay normal for long, as the Hyperion flies through some sort of energy cloud, damaging the colony ship and disabling its artificial gravity. From here, players get control of their character as they have to deal with the aftermath of this cosmic anomaly. This involves doing some light maintenance on the Hyperion before heading up to the ship’s bridge to talk with the Pathfinder and your dad, Alec Ryder.

After a quick chat, the Hyperion finally comes into range of humanity’s supposed new home and let’s say it’s looking a little worse for wear. But with the looming energy cloud, major disrepair on the ship and 20,000 people still left in stasis, it’s up to Ryder to fly down and act as the first scouting party in this new galaxy.

That’s where this sneak peek trails off, as Ryder looks down at the possible future homeworld for the human race. Based on all of the footage we’ve seen about Mass Effect: Andromeda, chances are this sortie down to the planet’s surface does not go quite to plan, as it would be a rather short game otherwise.

You’ll be able to see what happens down on that planet on March 21, when Mass Effect: Andromeda finally launches.