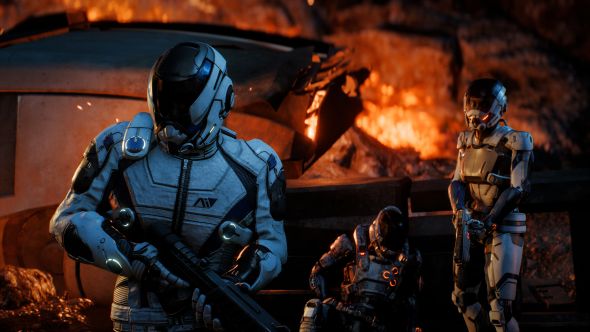 According to Mass Effect: Andromeda producer Michael Gamble, we’ve got a couple of surprises regarding the upcoming sci-fi RPG heading our way via Twitch’s PAX East stream. Both the reveals are coming today, the first day of the show, with the first coming at 1PM Eastern Time and the second coming courtesy of a panel show at 4PM Eastern Time. That’s 6PM and 9PM if you’re in the UK, 10AM and 1PM if you’re on Pacific Time, and 7PM and 10PM if you go by Central European Time.

The 1PM slot will give us further insight into the game’s exploration mechanics, but we’re still in the dark as to what might be revealed during the 4PM panel. Here’s Michael Gamble’s initial tweet (where he accidentally says 2PM instead of 1PM):

This Friday at PAX. Stream at 2 PM EST (exploration) on Twitch and another at 4 PM EST (surprise!) Tell yo' friendz.

Although the official Mass Effect Twitter account appear to have subsequently revealed that the tantalising reveal will be a mission walkthrough of sorts. Here’s Gamble again:

We will be looking at a mission! Not crit path. Minor spoilers. https://t.co/qqnxrDipuH

Of course there’s plenty more going on at PAX East if you’re not just interested in Mass Effect: Andromeda, so check out the full schedule to see what else is going on.