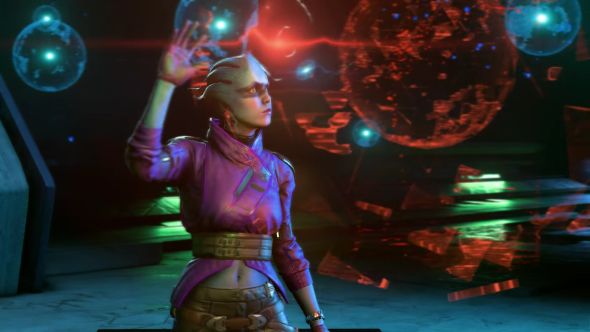 First came the Ryders, now it’s our turn to meet the voice actress behind Peebee in Mass Effect: Andromeda. A new interview reveals more of her character, and the fact that she can “fall in love” during the game, strongly suggesting she’ll be a romance option.

For the full lowdown on love in the new galaxy, check out our Mass Effect: Andromeda romance guide.

Christine Lakin voices Peebee. You may also know her as Jane from Telltale’s Walking Dead, Irina from Might & Magic Heroes VI, or Joyce Kinney from Family Guy.

Lakin describes Peebee as “one of the most fun characters I’ve voiced; she is impulsive, quirky very different than the rest of the team”, which tallies with what we know of her so far. Interestingly, Lakin says “she’s also somebody who has never really trusted anyone. This is the first time that she’s allowed herself to open up and be a part of a team, or fall in love.” That’s a fairly clear sign that she’ll be a romance option for the player, which isn’t much of a surprise as you can usually romance most of your squadmates, but it’s nice to have it almost confirmed.

The video coincides with the addition of Peebee’s profile to the Andromeda Initiative website, which gives a few new details on her background. We know now her full name is Pelessaria B’Sayle – we can see why she prefers Peebee – and that, as a ‘gunslinger’, she prefers pistols and biotic powers in combat. Her favourite power is ‘Invasion’, which as far as we’re aware, is new to the series. She’s from Hyetiana, a cold Asari planet with several research stations and biotic educational institutions.

You can also check out the interview with the Ryder twins’ voice actors. They bicker like real-life siblings.

Update:Andromeda producer Mike Gamble has since confirmed on Twitter that Peebee is indeed a romance option: