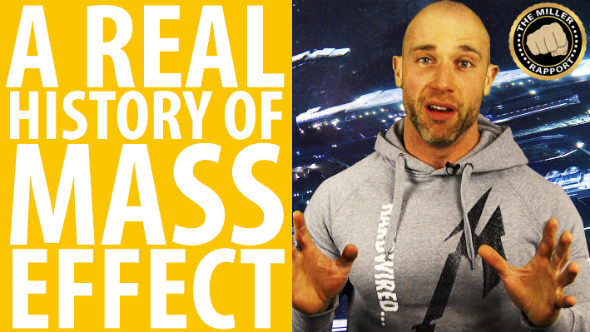 Listen: Mass Effect 3’s original ending wasn’t great, but the furore surrounding it probably got a bit out of hand. Likewise, we’ll be the first to admit that there are some times Shepard should have been thinking about saving the world rather than hopping into bed with a biotic. Simon Miller’s opinions on these matters are largely the same as ours, only with much, much more nerd-bashing and nods to thrash metal bands – sorry.

Loving the alien? Check out what romantic options you’ll have in Mass Effect: Andromeda.

Watch as Simon Miller attempts to explain the appeal of the beloved RPG franchise while foaming at the mouth with disdain and loathing for the very people who cherish it. Think the morality system is a great game mechanic? Think again, because according to Miller it’s as banal a game mechanic as asking the player whether they want to wear shoes. Of course if you are into games that are “about nymphomaniacs who hang around with modified animals and sometimes have heated arguments with children,” there’s every chance Miller’s opinions will appeal to you. This is Simon Miller at his angriest, so angry in fact, that he forgets to make all his usual references to the nutritional value of chicken or proper deadlift technique.

If you enjoyed the video why not subscribe to PCGamesN on YouTube? And if, somehow, Simon Miller managed to entertain rather than insult you, head over to his Patreon page to support him directly.