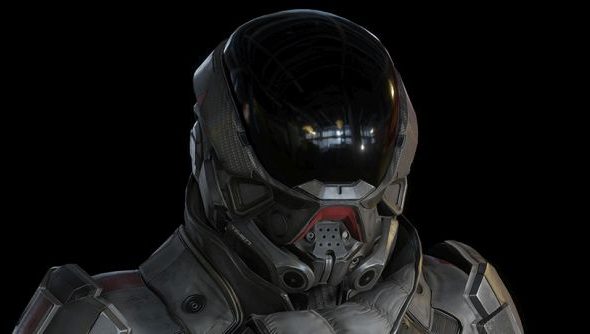 The great thing about galaxies is that they’re all far, far away. A marketing survey is doing the rounds that seems to reveal some key story elements from Mass Effect: Andromeda, Bioware’s sci-fi followup to their hit trilogy, due early next year. It’s not exactly groundbreaking stuff, seemingly being tests for key phrases that will be used on the back of boxes and store pages, but it does put a slant on the extra-galactic action that hadn’t been considered before. We’re heading out there to find somewhere to live – and the indigenous races aren’t too pleased about it.

Wondering about theMass Effect: Andromeda release date, system requirements and all the rest? Here’s everything we know.

Screenshots have popped up on both Reddit and Neogaf showing the survey, with a varying amount of information in each. The longest is from a question specifically on how this brief description makes you feel about buying the next game, not taking into account how you feel about the previous iterations:

There’s two fascinating tidbits in here. First, it sounds like we’ve had to get the hell out of the Milky Way for some reason. Whether we’re just greedy or yet another massive apocalypse threatens the galaxy, not so clear, but I doubt Bioware would go for the full on ‘no, you’re killing them all and taking their land because you’re explorers’ angle. Either way, it should set some interesting political overtones for the next game – let’s just hope it’s a bit subtler than Avatar.

Then there’s this line about a “seamless” open-world. Listen, I love Mass Effect, but those games are all seams. You’re constantly going from map to mission to town level to elevator. It never really took anything away – though those rides in the first game, yeowch – but could this hint at actually flying around in the Normandy equivalent, coming in to land on planets where and when you like? That’s ambitious, and far past the scale that Dragon Age: Inquisition managed.

Here’s the other two descriptions, which also came with questions about how they make you perceive the game – again, these are marketing angles from EA, not necessarily Bioware-branded plot summaries:

What’s interesting to me here are the mentions of “creatures and species entirely unknown” – we already know that Mass Effect: Andromeda is a reset, no longer featuring Shepard and far enough out from the original timeline and location that your playthrough can remain canon with everyone else’s. However, this would suggest that we’re not going to be seeing a lot of our old favourites like the Krogan, Geth, Asari and Quarians. That would be a shame, but if it means Bioware are going full-force on creating an entirely new galaxy-worth of creatures for me to totally fall in love with – literally and figuratively – then more power to them.

Of course, nothing’s final and this is all speculation. Plenty more of that going on in the relevant Gaf and Reddit threads. There’s also a lovely new render of Andromeda’s Pathfinder, part of which you can see above, from a recent art summit. Very pretty. We’ll likely hear more on ME:A at E3, with release now planned for Q1 2017.