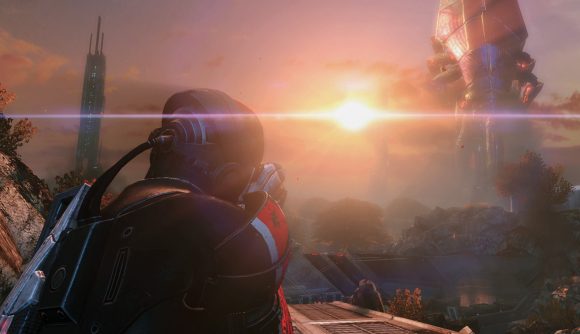 The original Mass Effect is a beloved classic by just about any measure, but it’s a bit rough around the edges, especially compared to the latter two entries in BioWare’s trilogy of RPG games. While the upcoming Legendary Edition will make visual and performance improvements to the whole trilogy, Mass Effect 1 is getting a host of improvements to make playing it a little more pleasant here in 2021.

There’s more aim assist, and every weapon has been rebalanced to make it feel unique in combat, as BioWare showed us in a recent preview event. There are no longer class-based weapon restrictions or aim penalties, either. You won’t be able to put points in your assault rifle stat if you’re not a Soldier class, but you’ll no longer suffer penalties for using those weapons untrained. There’s even a new HUD with your health and shield bars displayed prominently in the lower center of the screen, instead of a tiny window in the bottom-left.

The Mako has gotten reworked too, with new physics, a speed boost option, and an alternate control scheme to make it more comfortable to pilot. There are a host of other changes, including rebalanced boss fights, improved squad and enemy AI, reduced difficulty and frequency for minigames, and even an XP rebalance to ensure you can hit the level 60 cap without diving into New Game Plus.

While all the games in Legendary Edition are getting visual improvements, ME1 is getting some extra love. Eden Prime, for example, now has much more robust foliage, and the light of the sun is now ahead of you in the level, so that you’ll see more dramatic lighting as you progress toward the end.

And yes, we now have the option to skip those long elevator rides.

The Mass Effect: Legendary Edition release date is set for May 14, 2021. You can follow that link for a load more info on what to expect.