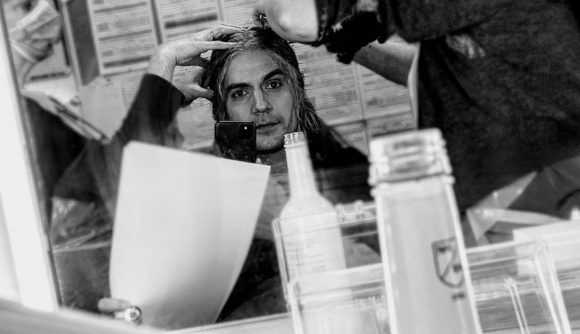 Is Henry Cavill going to be in a film or TV adaptation of Mass Effect? I don’t know, but Cavill certainly wants you to think he is. The actor has taken to Instagram with a trolling tease that he’s working on something in the Mass Effect universe, and the implications are obvious. Either Cavill is being extremely mean to Mass Effect fans, or we’re about to see BioWare’s sci-fi epic move beyond the world of RPG games.

The image shows Cavill at a make-up table. At the edge of the screen, there’s a piece of paper with a pile of blurry text on it. “Secret project? Or just a handful of paper with random words on it,” Cavill teases in the photo’s caption. “Guess you’ll have to wait and see. Happy hump day all.”

The blurry text is an excerpt from the Mass Effect 3 Wikipedia page, as the folks at Gamepressure discovered by running the photo through a deblur program. The text specifically references the bit in ME3 where you deal with the battle between the Quarians and the Geth.

So Mass Effect movie? Netflix series? Animated spin-off featuring the misadventures of Conrad Verner? Whatever the case, I need to hear Henry Cavill tell me about his favourite store on the Citadel. Just give me that.

Here’s the part in any Henry Cavill-related story where I remind you that the actor is a total nerd because, well, he is. He’s a Total War fan, and back in 2020 uploaded a PC build video that frankly had far more sexual tension than any PC build video should.

The long-awaited Mass Effect: Legendary Edition release date finally hits this May, and should serve as a pretty good form of life support for series fans.