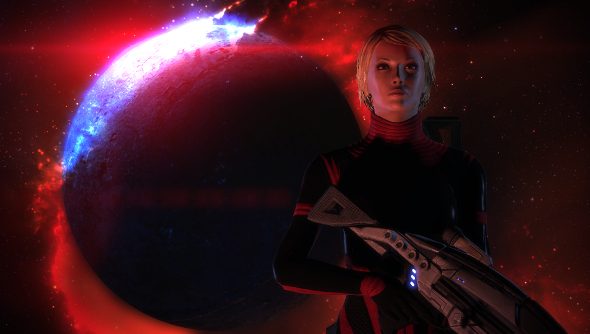 Mass Effect’s impossibly heroic Commander Shepard, until the final part of the trilogy, was almost exclusively marketed by EA as a fella, voiced by Mark Meer and given the striking face of Dutch model Mark Vanderloo. It wasn’t until Mass Effect 3 that FemShep got her time in the sun.

However, according to a tweet from developer Jonathan Cooper, who worked on the first two games before moving to Naughty Dog, Shepard’s very first incarnation was female. FemShep was the original Shepard.

Eventually, the popularity of FemShep, voiced by the always excellent Jennifer Hale, led to BioWare remaking the default version of the female character, and ran two community votes to choose her look. Mass Effect 3 even came with a reversible cover, with one side adorned with the stoic female hero.

I’m right in the middle of my first ever FemShep run, halfway through Mass Effect 2, and while this marks my third playthrough, I’m enjoying it just as much as my previous two. I like Meer’s portrayal of Shepard, but Hale, especially when reading Renegade lines, has an edge that makes her just a little bit more badass. It’s now hard for me not to imagine the saviour of the galaxy as a pissed off lady and jellyfish-hater.

Who is your Commander Shepard?