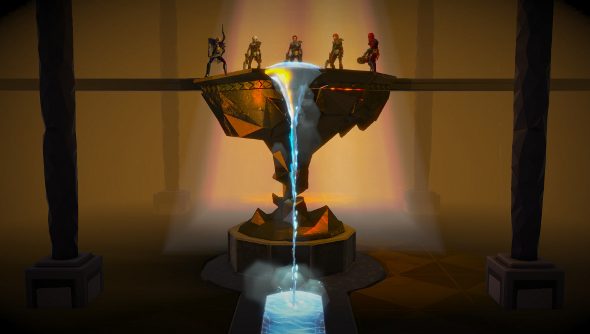 I live in a flat absent any chalices. I confess that I’m not always up to date on what’s in my cupboards, but I did just check, and no, I have no chalices. I did just by a measuring jug, though! That was exciting. Anyway, my chalice-less existence might be at an end, because Double Fine’s fantasy tactics game, Massive Chalice, has just hit Steam Early Access.

Massive Chalice is reminiscent of Fire Emblem, with turn-based tactical combat and a slightly creepy genetics system that encourages mixing and matching heroes to produce offspring with interesting traits.

It goes beyond Fire Emblem’s premise, though, covering 300 years and long bloodlines. You’ll see babies grow up to become warriors and then die, of old age or in battle, with their descendents carrying on the war that spans the whole game.

With Broken Age split into two halves – the first of which is a lovely half, admittedly – and Spacebase DF-9 was pushed out the airlock before a lot of the advertised, if not actually promised, features had been implemented, Double Fine’s Early Access forays have been a bit disappointing, but Massive Chalice arrives in a very different state.

It’s the full game, playable from start to finish. Indeed, there’s already been a backer beta, where Kickstarter backers have been able to play the entire thing. And it’s funded up to spring next year, when it’s expected to hit version 1.0. More features are planned, including controller support and an Iron Man mode, but most of the work in Early Access will be on balance and polish.

The 25 percent discount will stop on November 18th, but Double Fine plans on having sales during the Early Access period.