Here in the UK we’ve been in lockdown for well over a month now and we’re starting to forget what it’s like outside. Our windows have become as videogames: portals to a mystical other world, where the air is fresh and doesn’t smell like pizza and beer.

April has seen some thoroughly exciting new triple-A portals open on PC, including Gears Tactics and XCOM: Chimera Squad. We’ve got Minecraft Dungeons to look forward to in May, but what of those you may not have heard of? Lesser known, but not lesser, portals from the worlds of indie and the mid-market can yield unto worlds every bit as wonderful as those with bigger marketing budgets to keep us all entertained until we can experience reality once again.

And that’s where these monthly lists come in. We’ve scoured Steam to find ten of the best looking but less exposed upcoming releases to shout about. This May, we can look forward to aerial combat tactics in the Warhammer 40,000 universe, an homage to the classic Fallout games, an inventive survival horror that mixes in procedural generation and permadeath, and many more.

So without further ado, here are ten exciting games you might’ve missed in May if not for this list – but wouldn’t have wanted to. 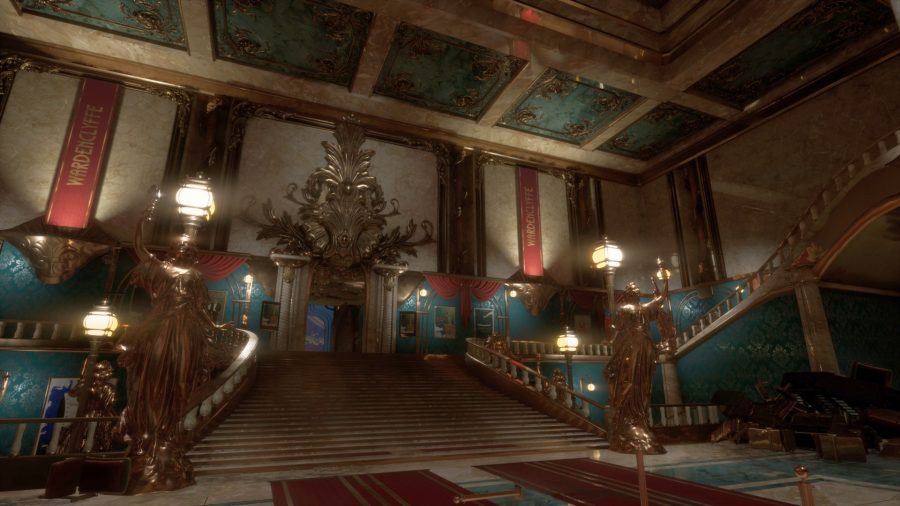 With Ken Levine issuing no peeps about his new project and System Shock 3 having a rocky development, it’s a quiet time for those who miss cerebral single-player adventures like BioShock. Close to the Sun might just save the day. Taking place aboard the deco-drenched Helios – a massive waterborne haven for only the brightest scientific minds as selected by Nikola Tesla – the setting is pure BioShock. You play a journalist who steps aboard in search of her sister, and inevitably, discovers All Is Not As It Seems. There’s no combat, but with the resulting focus on puzzles and exploration, an exciting Rapture-like setting is allowed to breathe fully. Would you kindly check out the Steam page? 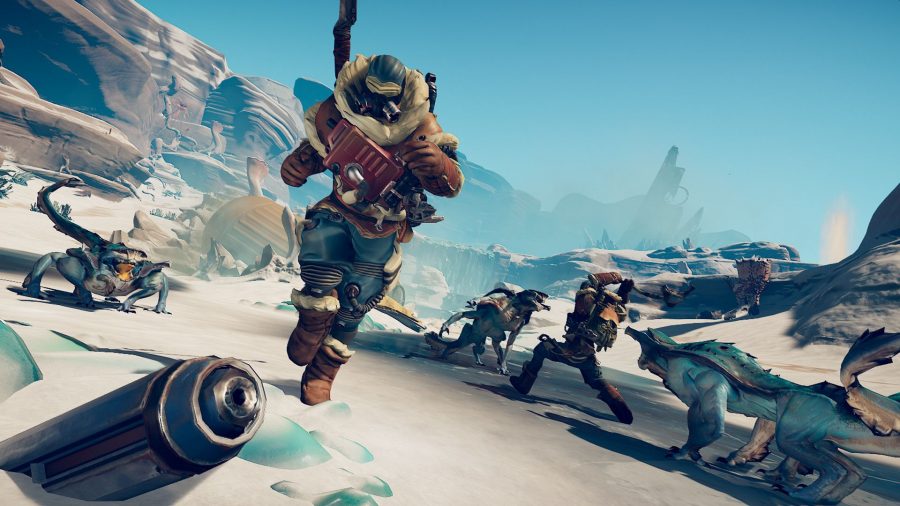 You’ve crash landed on an alien planet full of mystery, with no hope of returning to Earth. You’ll need to survive not only hostile environments and hungry locals, but other colonists too – perhaps by turning in quests for those who don’t want you dead, or by building, crafting, and leveling up your own defences. Ultimately you’ll explore seven distinct biomes, unravel the mysteries of the planet, and discover the true goal of your own mission.

But there’s a catch. After 168 hours you get turned into an unworldly being by the strange entity known only as the Sphere. With both PvE and PvP game modes, a gorgeous alien world to explore, crafting systems, and a unique seven-day cycle, Population Zero aims to be a sci-fi survival MMO like no other. Check out the Steam page while there’s still time. 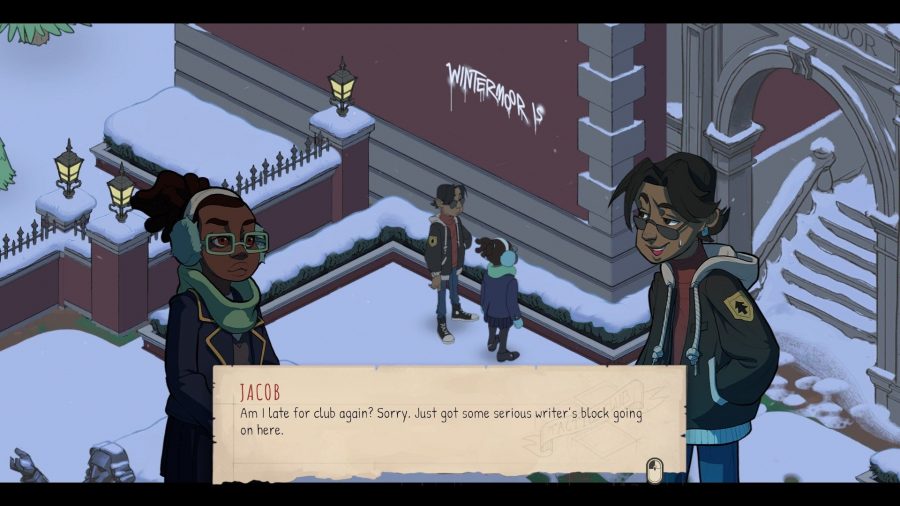 What with Gears Tactics and a new XCOM releasing at the end of April, it’s a good time to be a tactics fan. But they both take a sci-fi setting about saving the world, or at least a city. If you fancy something a little more relatable and low-stakes – even if it feels like the end of the world while you’re going through it, as we all must – how about a game about surviving high school?

You’re a misfit student at the famed Wintermoor Academy, running a gaming club with your misfit friends. Explore the school and break down the walls between its cliques as you recruit their members to your club, where they’ll discover their fantasy alter egos and join you in turn-based tactical battles. Roll for Steam page. 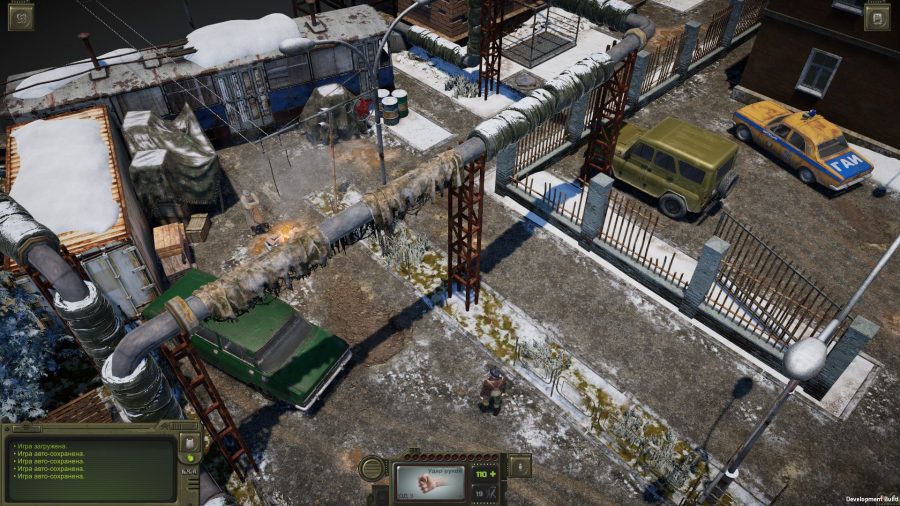 Trudograd is the standalone expansion to ATOM RPG, a CRPG set in an alternate near-future when humanity emerges from bunkers to reclaim the planet after the Cold War hots up in 1986 and we reduce Earth to radioactive slag. If that sounds familiar, it’s intentional – the games are inspired by Wasteland and classic Fallout, before the series went third-person.

In your capacity as a rookie agent of ATOM, an organisation tasked with protecting the remnants of humanity, you’ve learned of an asteroid on a collision course with Earth – as if nuclear near-annihilation weren’t enough. You’ll journey to the metropolis of Trudograd, a beacon for survivors in the post-apocalyptic Soviet Union, to seek out what may be humanity’s last hope against another extinction-level threat. In this distinctive setting you’ll find a CRPG in the finest traditions of the genre, featuring multiple-solution quests that alter the city around you, a cast of unique characters with branching dialogue, hardcore turn-based combat, and a huge city to explore. Remember: when you hear the siren, duck, cover, and Steam page. 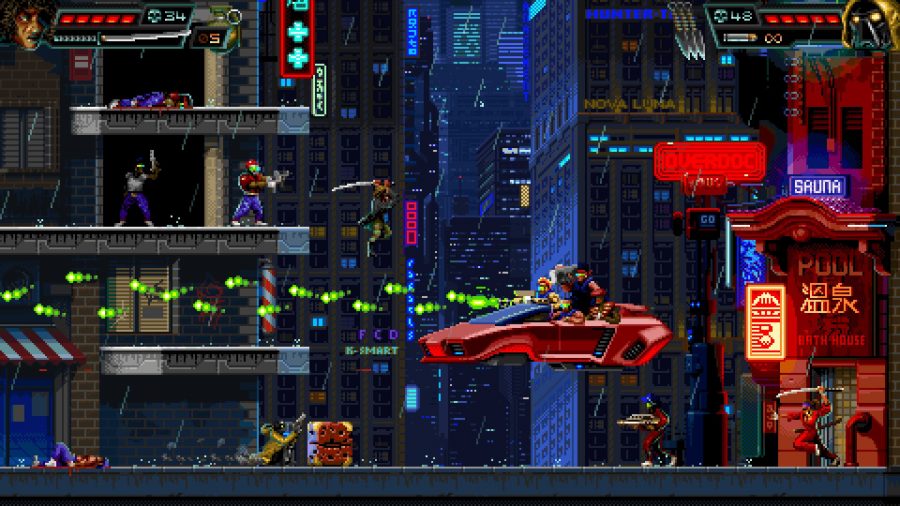 “Make a healthy living, by making living unhealthy,” says the Huntdown trailer. This is an old-school action-platformer with an old-school vision of the future: a dystopia soaked in neon, realised in 16-bit pixel art, and awash with acute diagonals and hovercars. Colourful gangs reminiscent of those in The Warriors hold the streets in an iron grip which only bounty hunters can loosen. Choose one of three hunters to play, including the splendidly named ex-commando Anna Conda, and shut down the gangs with a huge arsenal of guns (yes, including lasers), all to a pumping soundtrack of fuzzy ’80s synth and wonderfully tongue-in-cheek humour. Zap over to the Steam page here. 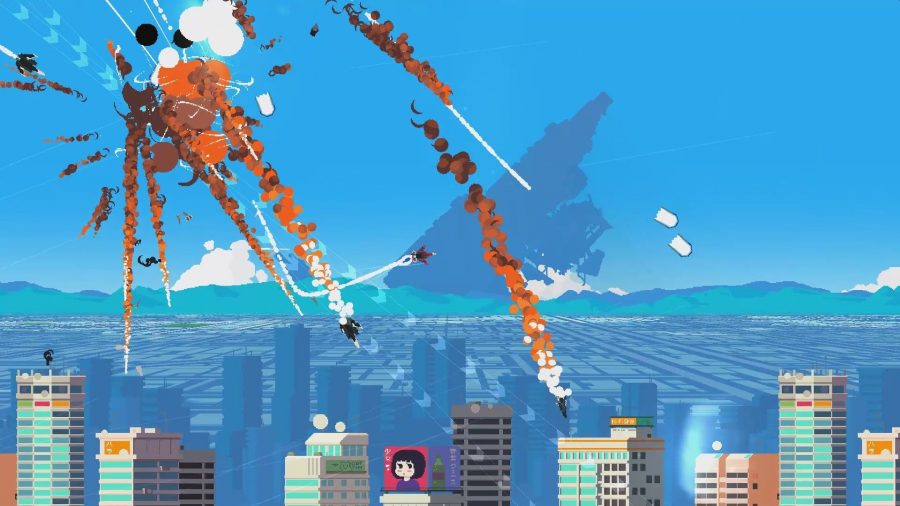 Jet Lancer is a bullet hell shooter featuring a plane more agile than a ballerina, a guitar-shredding soundtrack, and aerial combat faster than the speed of sound. You are a mercenary fighter pilot who is very much in demand despite having dropped out of flight school, and while dealing with sky pirates is fine for a day job, when giant mecha converge on Root City it’s time to up your game. Challenging but fair, easy to learn but hard to master, this is one for the adrenaline junkies – featuring an extensive arsenal to suit every taste and an aggressive New Game Plus mode for the truly hardcore. Now go jet-lance that Steam page. 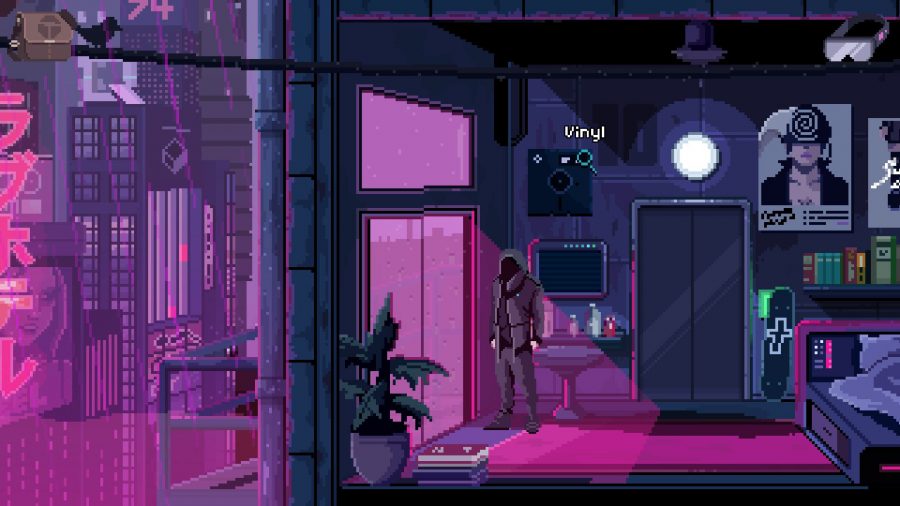 The AI has happened, and one artificial intelligence has prevailed above all others. Under its auspices, everyone is plugged into an augmented reality that optimises its users’ experiences. You play Nathan, an outsider who, thanks to a custom headset, can still switch off and see reality for what it is. When your girlfriend goes missing, leaving your headset smashed and a cryptic note behind, your investigation sweeps you into a world of hackers, hardware graveyards, VR debauchery, AR technomancers, and cryptoshaman tribes – all delivered via an old-school point-and-click adventure.

Expect a bright and emotive pixel art in the style of the original Discworld and The Secret of Monkey Island, and if the in-game music is anything like the shredding synth-metal of its trailers, it’ll have one hell of a soundtrack too. Go plug in via the Steam page. 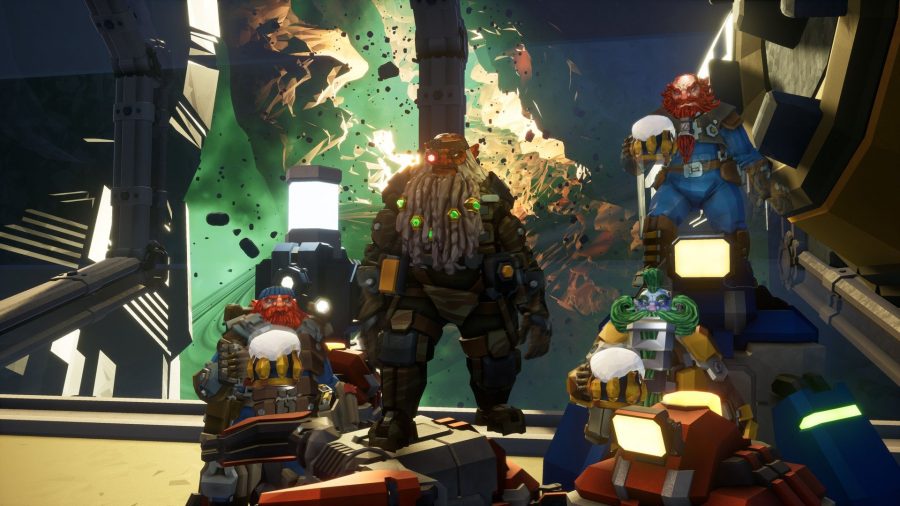 If we’ve said it once, we’ve said it a thousand times: fantasy archetypes don’t make it into sci-fi often enough, or with enough procedural generation and 100% destructible environments. Seriously, it’s a problem.

And Deep Rock Galactic is the solution. Take the badass beer-chugging, beard-having, mineral-moving dwarves that you love from fantasy and put them in space. Now they have powered armour with attached miniguns and mining equipment. Their goal, as ever, is to dig into procedurally generated cave systems that are entirely destructible, slay monsters and extract resources. You can do it alone or with friends in 1-4 player co-op. User reviews from its early access period are 96% positive – which is amazing – and it’s getting its full 1.0 release this month. Keen? Go mine the Steam page. 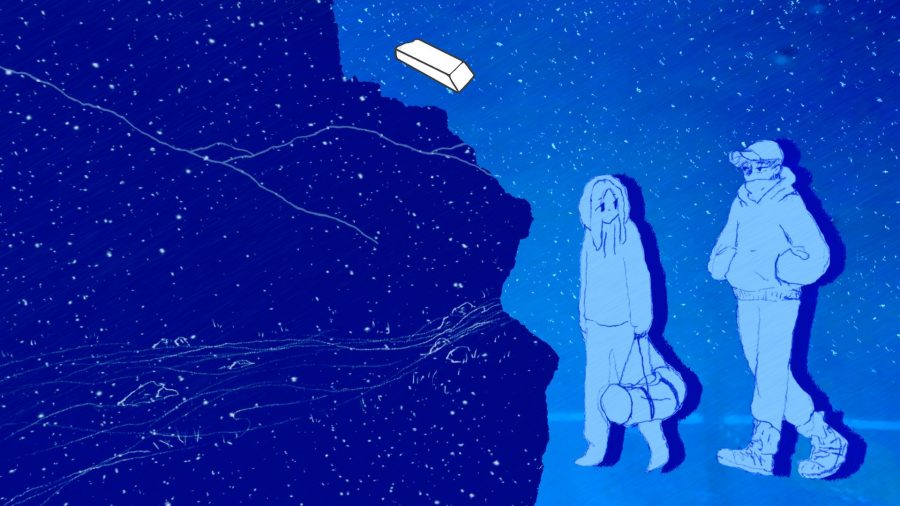 Published by Annapurna Interactive, who also brought us Telling Lies and numerous Bafta winners including Journey, Outer Wilds, and What Remains of Edith Finch, If Found… is a visual novel about the search for connection. Teenager Kasio returns home to the west of Ireland during December 1993, a month of memories both happy and sad, leading up to the end of the world as a black hole threatens to swallow everything on new year’s eve. If Found… promises awkward crushes, hand-drawn art, a haunting soundtrack, and lashings of angst in both pubescent and existential flavours. Press the Steam page to decompress. 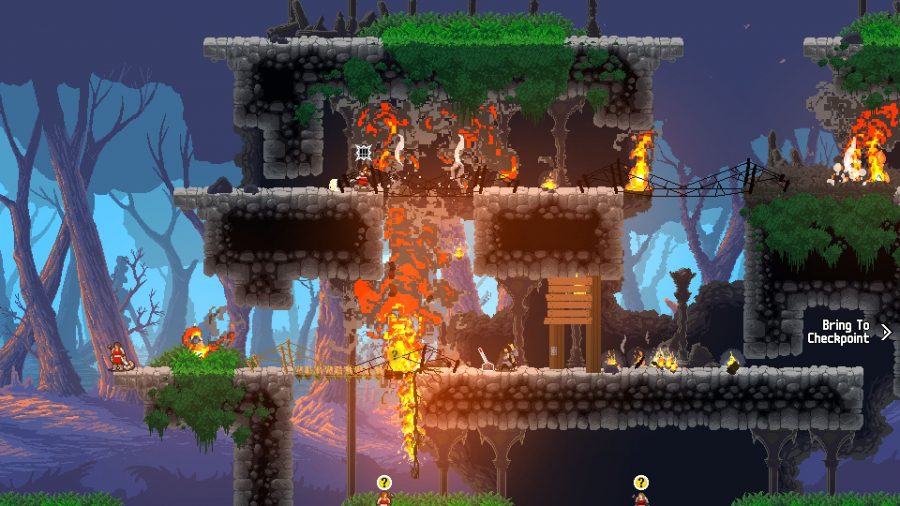 Published by Humble Bundle, Wildfire is a stealth platformer in which your village is raided by the villainous armies of the Arch Duchess – and you’ve been branded a witch. It just so happens they’re right about that. Elude and outsmart her superstitious minions as they hunt you through lush forests, deep caverns, and frozen mountains, deepening your connection to the elements and using fire, ice, and earth magic to manipulate the environment and punish your oppressors. Know what you get when you add fire to water? Steam… page. 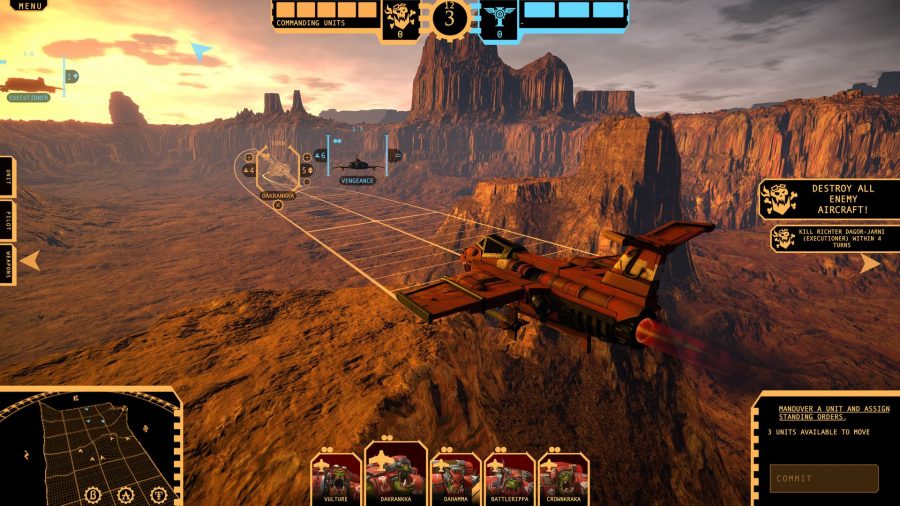 Games Workshop’s endlessly popular Warhammer 40,000 tabletop game has spawned equally endless spin-offs over the years, from Inquisitor to Necromunda to Battlefleet Gothic and many, many more. Released back in 2007, Aeronautica Imperialis focuses on aerial combat in the 40k universe, and now it has a digital version with Flight Command.

Controlling either the Orks or the Imperium of Man, you’ll plan manoeuvres, issue flight and attack commands, then watch your strategy unfold in real-time cinematic playback as your squadron executes your orders – and, hopefully, the enemy. Flight Command features a full single-playing campaign in which you customise your squadron, level-up your pilots, and outfit their planes to build the ultimate grimdark air force. Unleash a digital sortie upon the Steam page.

That’s your lot for this month! If you don’t see anything you fancy, it’s not like the contents of our other roundups have been pulled from sale – do check out our lists from April, March, and February if you’d like, and we’ll see you again in June.