A vast swathe of both your total gaming experiences and mine, through the sprite-laden ’90s, the boom of 3D polygonal graphics, and the gradual sophistication in game design that led to some all-time classics through the early ’00s, were had before anyone gave two Cherry MX Browns about peripherals.

Instead, they were tapped out unceremoniously on hearing-aid beige keyboards and mice, which looked indistinguishable from the ones normal people like our dads used in their offices. We dreamed back then of better graphics, bigger worlds, and even bigger screens, because the platform seemed in its infancy; the possibilities all seemed up for grabs. Never did we hunger for better keyboards.

More about the games than the bits you play them with? Good on you – here are the best PC games. Enjoy.

Then, slowly, the culture shifted. It started, as far as I remember, with the Razer Boomslang in 1998. When it arrived, with those enormous left and right mouse buttons like an angle grinder blade, its radical design seemed to indicate that it had solved a problem with conventional mice that we didn’t know existed.

Look at it next to a perfectly good IntelliMouse. It covertly communicates that all this time it’s been much harder to click on things – in games, on your desktop, when you’re idly dragging out little boxes to see if you can make a perfect square – than it needed to be. What’s more, other people you might bump into on some Gamespy Quake II server might suddenly have an insurmountable advantage. Because their mouse buttons might be much bigger than yours. 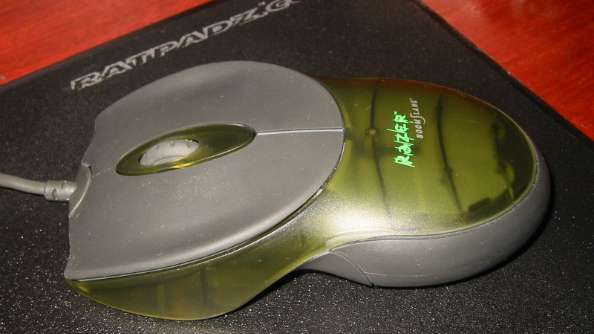 The most desirable gaming peripheral in 1998

The culture of competitive gaming peripherals was born. Proliferated by insecurity about our abilities, in an era when it genuinely smarted to be called a n00b, it took further root through the ’00s when gaming became an increasingly acceptable pastime and thus it we were allowed to spend a bit more money on the fringe aspects of our once shadowy hobby.

Then eSports happened, stopped happening, then started happening again, this time in massive arenas in Poland and Shanghai. Pro teams signed deals with PC hardware manufacturers. Nervous-looking European teenagers with gelled hair started appearing on motherboard adverts, wearing polo shirts with their own signatures on them. It was all building to one central idea: better peripherals can make you a better gamer.

Mechanical keyboards represent the nadir of that idea. They’re the moment at which we whisked up years of marketing bluster into a heady Kool-Aid and knocked it back, telling ourselves that this new and interminable clackety-clacking was somehow an indicator that we’d just made a valuable, performance-enhancing upgrade to our PC. 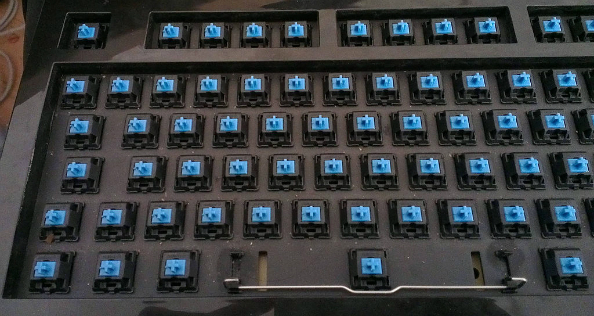 Here’s what manufacturers said: mechanical keyboards offer a more robust and tactile experience than membrane boards. The key design offers more feedback and more precision, and in a gaming scenario than could mean the difference between success and failure. In addition, they allow for a much higher number of simultaneous presses and a higher rollover, so your inputs will never be missed as they might on conventional keyboards. With several mechanical key types on offer, each offering a different tactle experience, you can find the board that suits you best.

And that sounds great. We were receptive to the message. We’d already learned that, to an extent, having a mouse designed for gaming is actually quite a pleasant thing. Whether or not it affects in-game performance, a gaming mouse is generally pretty comfortable and has a few extra programmable buttons that might come in handy. We were on board with that.

So when the manufacturers who sold us those gaming mice came back and said they’d done something meaningful to keyboards too, we listened. Actually, we did more than listen. We bought the things by their thousands.

I don’t refute the spec sheets of mechanical keyboards; their 50-key rollovers or 50 million operations. Most of them, particularly today, are incredibly well-made peripherals built on sturdy, tastefully brushed metal bases with useful backlit keys. They deliver on all the little, prosaic promises made by their makers when they first started to break into the gaming market earlier this decade – but what those little promises add up to is a solution to a problem that didn’t exist.

Here’s what I started playing PC games on: 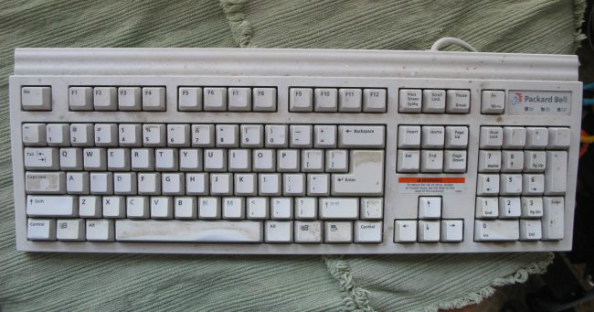 It’s the keyboard that came with my circa 1998 Packard Bell PC. It doesn’t have a 50-key rollover, and it didn’t come in a variety of Cherry MX varieties for me to choose from. And yet never once, during year after year of use, death after death in some of the best (and worst) first-person shooters the platform has ever seen, did I ever sit back in my chair watching a You’re Dead screen and go, “that was my keyboard’s fault.”

Because it wasn’t. It never is. The number of keys you can simultaneously depress, as if you’re rolling out pizza dough on your keyboard, is a meaningless figure once it gets past a certain point (let’s say five). Whether or not each key registers a tangible click when you press it isn’t going to make the game you’re playing more enjoyable.

There were downsides to the old designs, admittedly. There was the backlighting problem. The lack of media controls. The gradual build up of everything you’ve ever eaten, touched, or scratched slowly presenting itself in a gruesome build-up all over what was once a pristene beige object turned horridying brown-grey. But these problems all have very easy solutions, and those solutions don’t look like this: 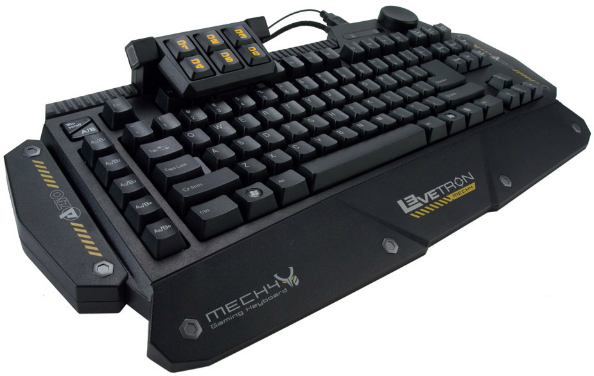 I was a fairly early adopter. I’ve been using mechanical keyboards for both gaming and work use, on and off, for about five years. It’s taken me that long, five years of daily use, to crystallise a few salient facts in my brain:

It’s much harder to type accurately on mechanical keyboards.

They don’t make me any better at games, nor the games any more enjoyable.

What their devotees will tell me is that it’s all about the feedback. In the same way a tightly-tuned drum kit sends your sticks back in your direction when you hit the skins, a vital aspect of playing the instrument, mechanical keys push back towards you when you hit them. Exactly how they do that, and whether they click or not, depends on the switch type. But somehow that feedback is condusive to a better typing experience.

Nope. Not for this guy. At the risk of sounding like an eager-to-impress middle schooler, I do a lot of typing. As with a lot of people, it’s pretty central to my job. I spend eight hours a day writing thousands of words for articles and emails, then I go home and hit WSAD, E, space, and shift a lot.

I can’t type on a mechanical keyboard for shit. Not when I first got one, and not now after five years. Everything I try to type out is riddled with little typos, and that makes me wonder: am I making typos when I play games, too? Am I registering a whole bunch of unnecessary key presses? While I’m doing that, typing out nonsense that I have to go back and correct, the room is filled with jarring click-click-clicking, as if there’s a courtroom stenographer behind me, furiously keeping record of every keystroke.

All this I put up with, because I’m clinging on to the abstract concept that this mechanical keyboard I have is somehow better for gaming. 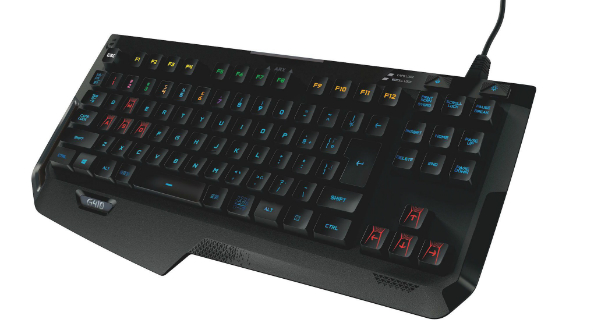 I appreciate that there’s something unavoidably Luddite about my point of view. I’m probably just a generation too old to move with the times and accept that all PC gaming equipment needs to be constructed to military-grade standards, for reasons I’m now too irrelevant to grasp. Mechanical keyboards are the peripheral equivalent of Snapchat, and I’m still on MSN Messenger wondering why none of my friends have come online for 12 years.

But let’s remember this: manufacturers didn’t release mechanical keyboards because they ran some tests and discovered they were empirically better for gaming. They released them to see if we’d buy them. They released them because, really, where else can you go if you’re a gaming keyboard manufacturer? How else can you create a higher price point for such a utilitarian, unglamorous product?

And we did buy them. Loads and loads of them. They’ve become de rigueur. It’s since become more than acceptable to spend triple figures on a rectangle full of keys. That’s why manufacturers released them.

Look, I’m sure you may disagree. It’s a subjective experience, isn’t it? You might type everything perfectly on a mechanical board, either because you decided it was perfectly acceptable to have to re-learn how to type to accomodate this new device you just bought or because your fingers are just good like that.

You might love the sound of that clicking – or you might have a board with silent switches, which aren’t actually silent but bring the noise level back down to something equivalent with membrane boards.

But tell me this: in those first exploratory days of your PC gaming, when you sat before a great beige keyboard that came with the PC, surrounded by floppy discs, bottles of Sunny Delight, and the members of Kriss Kross, did you ever wish for something better to type on? What, exactly, is the problem that mechanical keyboards solved?