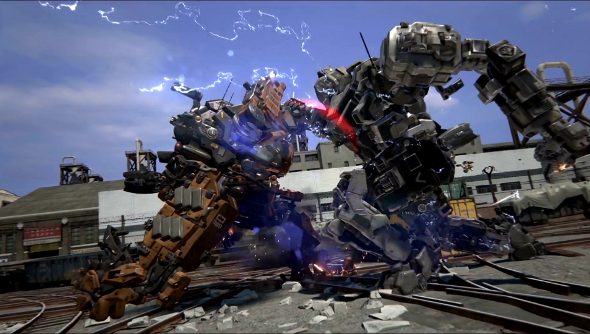 The mechs of Project HON, NCSoft’s mech brawler and shooter, have a diverse range of interests. Some of them like to fire off guns that look ludicrously tiny compared to the mechs’ giant metal frames. While the others are shooting, others prefer to speed around the urban battlefields on a motorbike, sorry, as a motorbike. They are transformers.

But the most popular pastime by far seems to be punching stuff, often other mechs.

The slipping and sliding mechs remind me of Hawken, which lamentably appears to be almost dead whenever I try to play. It’s not clear if, like Hawken, Project HON will be a free-to-play dealio, or if it’s going to buck the trend and simply require a one time purchase. It has the air of a multiplayer game about it, so assuming free-to-play wouldn’t be a stab in the dark.

While the environment shown off in the trailer is a bit on the dull side, the mechs all look like lovely, intricate robots, all gorgeously animated and hyper violent. If the trailer is indicative of the in-game action, it could be quite the treat.

It’s being developed on the Unreal Engine 4, and is expected to launch on PC, as an exclusive, next year.