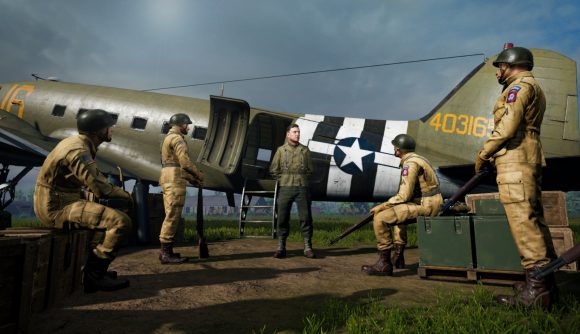 After launching during The Game Awards, the reception for Medal of Honor: Above and Beyond is not good. Less than two days after release, the VR game has “mostly negative” reviews on Steam, players reporting a laundry list of issues. A developer has confirmed that a remedy for some of these problems is on the way.

Critic reviews aren’t much better, with aggregator site vrgamecritic indicating very mixed reception. Going into the reviews on Steam, you’ll find many clocked an hour or two into the war game. From performance to gunplay to options available, many aspects come up again and again. “From simple things, like where does the mission screen appear, or making sure grenade models don’t overlap, to core gameplay mechanics like grabbing objects or reloading your weapon… They were all clunky and poorly implemented if not outright bugged and broken,” reads one review, another stating that low resolution “makes even the main menu unreadable and doesn’t really help performance much”.

Developer Respawn Entertainment is aware of the negativity, and a patch is set for next week to start fixing things. Smooth turning, removing the mission victory screen from between levels, fixing weapon grabbing issues in Quartermaster, and more will be in the update. In a post on Reddit, Oculus Studios executive producer Mike Doran says that the next patch is in the offing too, and he’ll provide details when a date becomes certain. “The team is in the middle of working on implementing additional visual scaling options. We hope to get this out as soon as possible, but it won,t be in the first patch,” He writes. “We are committed to listening to the community and trying to fix/adjust as many things as we are able to.”

Medal of Honor: Above and Beyond was announced last year, and it wasn’t always intended to be on VR. It’s the first new released in the FPS games series since 2012’s Medal of Honor: Warfighter.

We have lists of the best sniper games, and the best World War 2 games, if you want some alternative wartime thrills.