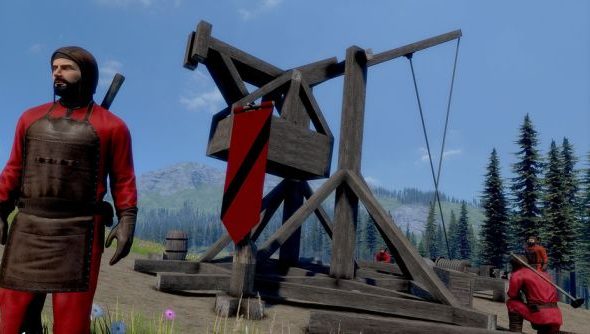 You know Space Engineers, the little sandbox game that could (sell one million copies in early access)? Turns out it’s the first entry in the Engineers franchise. The next is Medieval Engineers – about the construction (and deconstruction) of period cities, castles and fortifications.

The chief business of Medieval Engineers – if there is such a thing as business under the feudal system – will be in building and maintaining architectural works and mechanical equipment. Think fortresses and trebuchets; underground tunnels and drawbridges.

Keen Software House are, true to their name, eager to reflect the real physics of medieval Earth just as they did that of space. Their volumetric-based engine is all about structural integrity – meaning you’ll need to take into account an object’s mass and structure in both assembly and disassembly.

Medieval Engineers will launch soon on Steam Early Access, with a creative mode and prototype survival mode. There’s alpha footage of the former below:

Observe: landscaping tools that resemble those in Fortnite and Landmark, Engineers’ fellow Minecraft devotees in AAA. And a continuation of Space Engineers’ commitment to ensuring that player masterpieces can be taken apart as entertainingly as they are built.