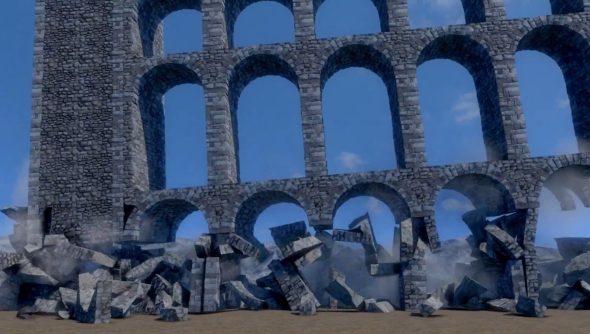 Toppling something monumental and grand is a singular delight. Stomping on Lego, liberal application of TNT in Minecraft, colliding spaceships in Space Engineers – it’s the simple pleasures that make this life worth living.

Like Keen Software House’s other Early Access game, Space Engineers, Medieval Engineers is grounded in physics. It’s not enough to make buildings fall apart, they’ve got to fall apart in the right way. The structural integrity preview ostensibly shows how that looks, in this early phase. And it’s already dramatic, watching a towering structure crumbling, as pieces drop perilously close.

Medieval Engineers is hitting Steam Early Access on February 19th, and will eventually include siege battles, with war machines pummeling stalwart castles, and presumably all the people inside.